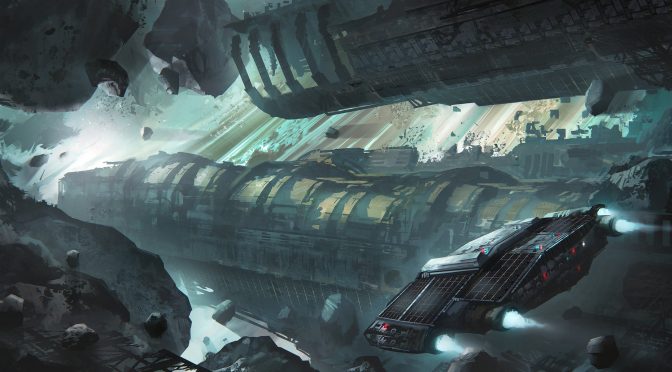 As the name implies, Boss Constructor gives you the tools to create a spacecraft that can range from a simple pod to a gigantic Boss spacemachine of destruction… and then have fun with it in small combat maps.

Boss Constructor is a simple game that needs no special introduction. The basic exploration mode has you traversing a randomly generated world map, one mission-map at the time, where you collect resources and new gear, meet new factions and chances to trade and upgrade. So no actual space travel takes place, you merely chose the next map and begin playing it. Once a map begins (and these maps are square, medium sized 2D areas), you have a main objective and a secondary one and you can also explore the area for crates of equipment or asteroids containing ore. The objectives are somewhat repeatable and plain and revolve around killing all ships or gathering all items in the sector. Once this map is complete, you return to the hangar for repair and upgrades and you pick the next mission. Although things get a bit more interesting when special missions appear like boss fights or survival maps, this basic mode is somewhat slow-paced and repetitive.

The alternative mode is a free sand-box where you have all the possible modules unlocked. This is the mode for those who don’t care to gradually unlock the upgrades and just want to dive right in the ship editor, which is the strong point of the game. The focus of Boss Constructor is understandably the hangar, where you edit the blueprints of ships, picking from over 60 different modules that spread to different groups (energy, weapons, defense, etc). Shields, mines, EMPs, missiles, railguns, tractor beams, it’s a long and robust list. You can’t go overboard though, as there are energy, credit and weight limitations; go too far and you can design a ship that’s too expensive, power-hungry, cumbersome, ugly or any combination of those. On the other hand, if you are imaginative and meticulous, you can come up with sleek machines of cosmic death.

Boss Constructor uses a WASD and cursor keys setup for the move/fire controls (or a gamepad if you fancy that), and you can change the settings to include mouse control as well. However, until you get used to the thrusters and the inertia physics, you might find your clunky spaceship a bit unruly to properly control. The placement of the modules can also throw your flying contraption off-balance, even if a small component is a smidge off-center, thus disrupting the symmetry of the design. You will also learn (the hard way) that crucial mods like the thrusters can be easily destroyed by enemy fire if exposed- thus leaving you to suffer in space, slowly dragging your steel corpse to the exit- so you also have to be strategic about the placement of each module. These strict regulations governing inertia, weight distribution, energy and consumption can be very unforgiving and you might create ships that are simply not fun.

Multiplayer is not only non-existent, but it’s not even planned by the developer for the foreseeable future. On the other hand, there are Challenges with online leaderboards and an Endless Mode, where you attempt to survive against enemy waves. There are even AI modes where you can simply set up peculiar fights between spaceships and watch them fight or evolve on their own. Furthermore, the developer has promised free DLCs for Boss Constructor and that, we like. We hate paid DLCs here in DSOGaming, so extra points for that. Developer Dr. Mirko Seithe has been working on this game diligently for quite some time now and he’s being very upfront to the community, posting regularly and asking for feedback to make his game better.

It should be noted that Boss Constructor directly links to the Steam Workshop where you will find numerous blueprints from other players and you can also upload yours. Here is where the game truly shines, as the creativity and imagination of gamers bring to life an abundance of spacecraft designs, from Space Jellies that spew lightning, to cyclopean Borg-like cubes of assimilation, Boss-mechs with moving parts and different phases of combat and (predictably enough) famous ships like TIE Fighters/Bombers, Imperial Star Destroyers, etc.

Boss Constructor is essentially an alternation of the design and the combat-test process, be it in a autonomous combat scenario, the campaign world-map or the endless mode. You don’t get to travel in space, explore and trade, so you will not get much out of Boss Constructor if you are not passionate about detailed spacecraft design.