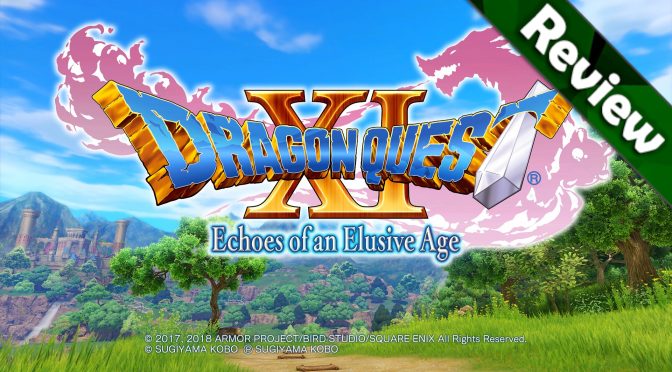 Back in the 80’s when Hollywood still cared about Val Kilmer and mullets were a conscious  fashion statement, software entrepreneurs noticed a growing market in Japan for role-playing, computer games based on Dungeons and Dragons. They decided to give Japanese game designers a crack at the genre and, in a flash, JRPG’s were suddenly all gamers at the time could talk about.

Two games in particular captured imagination of players so effectively, that their names still grace our shelves more than thirty years later. One was designed by Hironobu Sakaguchi and named Final Fantasy, while the other was by Yuji Horii called Dragon Quest. These classics offered the most polished experiences of the early JRPG genre, and millions of sales were achieved between them.

Fast forward to the present and the two grandfathers of classic JRPG now resemble high school buddies that have lost touch. Final Fantasy still places importance on character driven gameplay, yet its combat mechanics have steadily taken on a more action-RPG style. Dragon Quest, however, received only minor alterations to its core design, at least until the 2004 installment, Dragon Quest VIII: Journey of the Cursed King.

For this entry, Square Enix was ready to redesign the way a Dragon Quest game could play, and development was handed to Level 5 – a studio that had demonstrated notable skill at creating cell-shaded, three-dimensional games. Upon bringing their unique style to making a Dragon Quest game for the PlayStation 2, it became a fluke success, with some fans proclaiming it to be the best entry in the franchise, and the best JRPG on the platform.

In so many ways, Dragon Quest XI: Echoes of an Elusive Age, is something of a sequel to Dragon Quest VIII. While not exactly a plot continuation, Square Enix has recreated many of Level 5’s accomplishments, and thereby ensured that their game excels for all the same reasons. I even got the in-game outfit from VIII as part of my review code.

In Dragon Quest XI, you play the Luminary – a legendary hero destined to save the world from an impending doom. It was foretold that the Luminary’s birth would be identified by a mark on his hand as a baby. Unfortunately, King Carnelian dozed off during history class and, ironically, believes that the Luminary’s mark is actually an insignia of the Darkspawn. Bummer.

As such, our hero becomes an outcast hunted ruthlessly by the king’s knights. The Luminary is not alone, however, and soon encounters companions that were fated to aid him in his quest (who, unsurprisingly, become your party members). The Luminary learns from his new cohorts that the world tree, Yggdrasil, singled him out to save the day, and the tree itself holds a secret that would grant him victory over evil.

One of the most obvious links to its older brother from the PS 2 is Dragon Quest XI’s return to a cell-shaded 3D style. This was a major hit with fans back in 2004 since players finally got the opportunity to step into the Dragon Quest universe for the first time. Now, thanks to the Unreal Engine 4, the world of Yuji Horii’s beloved franchise has been cranked up to 11.

If you add up the time I just stopped and stared at the quality of this game’s visuals, you could probably shave off at least 2 hours off my overall playtime. While Dragon Quest XI opted for that ‘cartoony’ visual aesthetics over photorealism, the developers have packed an astounding level of detail into the textures.

The leather and cloth in all of the characters’ clothing was especially pretty, but plenty of eye candy has also been packed into the game’s more mundane, world-building textures. Vegetation boasts an incredible variety of plants and makes the world feel lush and inviting, while carpets, tiles and the facades of buildings have received astoundingly detailed decorations.

Moreover, the choice to go with cell-shaded textures also gives the game a timeless link to the rest of the franchise. The first entry was released smack in the middle of the 1980’s anime boom, and much of Dragon Quest’s popularity came from the link it shared with Dragon Ball. By faithfully preserving Akira Toriyama’s unmistakable style, Dragon Quest XI will instantly feel familiar to old and new fans alike.

I will admit that I did have to mess around with the .ini files a little to tweak the way the game runs on PC. By default, the draw distance was a little shallow, and shadows were a little sparse. This was soon remedied after finding some tweaks on Steam’s forums, which fixed the jarring pop-ins and added some extra depth to shadows.

Square Enix have chosen to ditch what most of us would describe as an ‘open world experience’ in favour of making different areas available to the player as the story progresses. You have the option to fast travel back to certain hub areas if you so choose, however, this is rarely useful given that side quests also unlock in parallel with the central plot. The result is that the game handles its pacing really well.

When side quests do become available, the player will typically only receive two or three at a time within each town hub. They are generally quick diversions comprised of small tasks before you can get back on track with the Luminary’s quest. It is a great throwback to how RPG’s used to play once, and it ensured that the central plot held more presence within the many hours I have spent doing stuff in this game.

Square Enix have also attempted to keep the player invested in Dragon Quest XI’s narrative by greatly reducing the need to grind. Those that prefer to avoid all non-essential battles and resource gathering will undoubtedly have far more difficulty with bigger bosses, but winning the fight is quite possible. Nonetheless, the grinder addicts will still be handsomely rewarded for their work.

And on the subject of fighting: Yes, the battles are about as old-school and turn-based as a Dragon Quest game can possibly get, but this game still managed to sneak in a few novelties. By giving the player a set of fine controls over how battles play out, Dragon Quest XI provides ample opportunity for tailoring your own, unique strategy.

The Luminary’s little entourage will ultimately consist of seven characters, and the player can enter any four into the fight. You can choose the characters you want to control personally, or you could just give everyone a predetermined fighting role while you sit back and peek through your fingers in suspense. 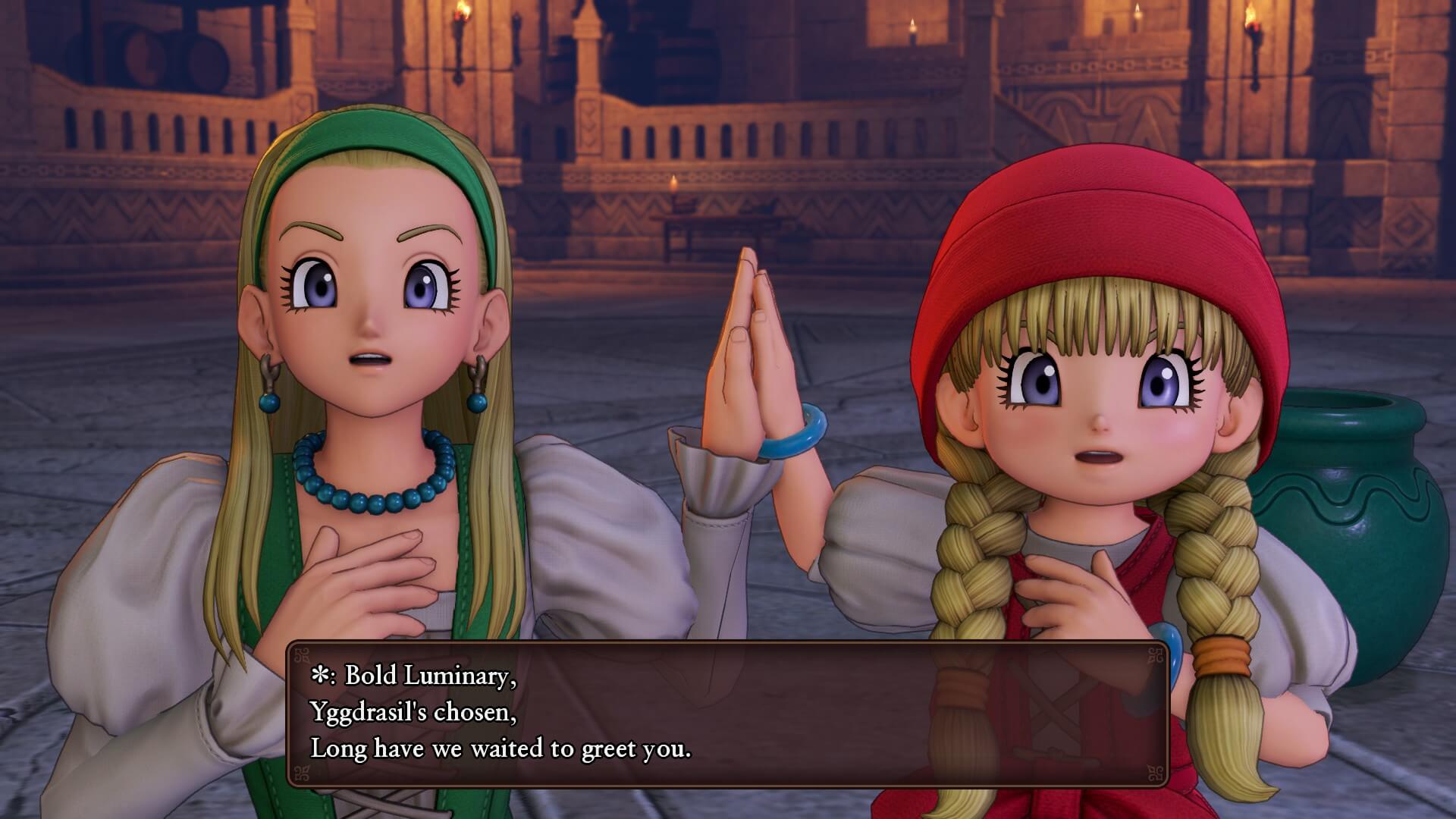 Another layer of gaining a strategic advantage comes through the ‘Character Builder.’ This is the game’s version of a skill tree where experience points are spent to unlock perks or special moves for each character. While XP is certainly dished out extremely sparingly, you can always recall all your points for redistribution if what you unlocked makes you sad.

As a final ace up the player’s sleeve, your characters will also enter a ‘pepped state’ after giving or receiving an indeterminate amount of hits. This is similar to the ‘tension state’ of Dragon Quest VIII where a character deals more damage, and has an increased chance of landing a critical hit.

Having multiple characters pepped up at once means that unique, combo attacks become available. This is the closest Dragon Quest XI comes to resembling modern Final Fantasy games as these stunts lead to flashy, cinematic assaults against the opponents. They make for an exciting contrast against the mild and staccato blows of normal wallops, and, most of all, you feel like a total badass!

One thing I hated, though, is that you only really see the other characters during fights and cut scenes. I realise that having six people constantly following you around could make the screen a little cluttered in certain scenarios. Yet, it felt extremely lonely wandering through the wilderness by myself for the most part, especially since there are Dragon Quest games that comfortably showed multiple protagonists on screen.

Not seeing other characters during exploration is honestly more of a personal gripe, but my immersion in the game was completely shattered every time the supporting cast just magically appeared at every fight and cut scene. This design choice was especially tragic considering the game goes through so much effort to make the members of your posse so likeable and distinctive. Is there a modder that can please fix this?

Seeing as we are splitting hairs, I occasionally had to replay large sections of certain quests due to lack of a more active autosave feature. I realise that in most RPG’s the golden rule is save, save, save, and save again, but Dragon Quest XI only allows you to backup your progress by confessing to a priest in a church, or to an angelic statue.

This is a long-standing eccentricity in the series as a whole, but it shows how older design philosophies are not always better. If you die in a boss battle, and it has been nearly an hour since your last confession, too bad! Back to the start with you.

Lastly, the game doesn’t have the best sound design. I know fans have been complaining about the artificial quality of the music, but at least the tunes are catchy. The problems start when the game plays the same track over and over too often. For an adventure that will take the average Joe eighty-plus hours to complete, the variety of music is somewhat lacking. On top of that, good luck getting true 5.1 audio outputs to work.

I could easily fill a ten thousand word review on this game, but I’d rather tell you why playing Dragon Quest XI is not just fun, but important. This game is essentially one, big, giant middle finger to the rest of the modern gaming industry. It so effortlessly brushes aside nearly all of the ridiculous dead weight that plagues modern game design that you find yourself wondering how you put up with so much crap these days.

At the time of writing, this game has no microtransactions, no multiplayer, no DLC, and no loot boxes. This game does not drop you in the middle of an open world amidst a plethora of objective markers and expects you to make your own fun. It has neither a gritty tone nor excessive violence, and doesn’t make your frame rate plummet with flashy, graphically accelerated effects.

What Dragon Quest XI does have to offer is a great experience for virtually any gamer, and I think Square Enix needs to be applauded for producing something like this in the modern gaming scene. Their game puts on a charming and whimsical performance for the player, but it never shies away from conveying mature themes and issues.

It is a gamer’s game that harkens back to an age where developers wanted you to have fun with their product more than to part players with their cash. It is a true adventure that takes you by the hand and tells you an interesting yet uncomplicated story, while still giving you just the right amount of freedom to indulge in a few light distractions.

If you have never played a Dragon Quest game, or you would finally like to take a plunge in the JRPG pool, this is absolutely the right place to start. If, on the other hand, you have lived and breathed everything Kingdom Hearts or Persona for the last couple of decades, beware: This game might feel a little like cheating on your favourites!

Playtime: 86 hours total. For main story line along with some side quests