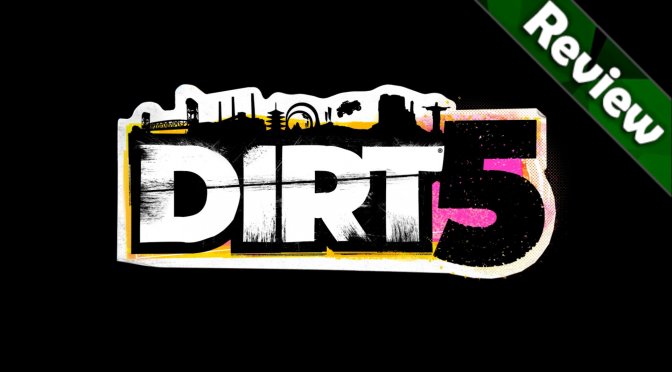 Whereas bolting a wheel and pedals to a desk was once enough to call yourself a simulation rally racer, this sub-genre of gaming has since evolved into something far more elaborate. Today’s sim fanatics build up colossal, multi-monitor racing rigs fitted with custom-made gauges. They even wear helmets and buy licensed peripherals covered with the hide of a real dead cow. To them, titles like Dirt Rally (or F1) are no longer games; they are the means to invite the real experience of motorsport into their homes.

On the other hand, you’ll find noobs like me who just want to cut straight to that exhilaration of off-road racing without resorting to the strict (and frankly pricey) demands of the sim scene. Here Codemasters had our back since 2007 with the Colin McRae Dirt franchise – a collection of games that never forgot how much fun racing in mud, dust and sand can should be.

Dirt 5, therefore, represents an entirely different turn (pun intended) for this franchise. There was an obvious evolution from Dirt 1- 4 as Codemasters gradually expanded and refined the basic gameplay, but with Dirt 5 it feels as if they threw out the baby with the bathwater. Several basic components from previous entries are present, and the gameplay is at its strongest when they are given priority. At the same time, I had great difficulty believing that this is a new Dirt game – it just feels too different.

Talk Dirt to me

One of the first things that hit me with Dirt 5 was also one of the game’s best aspects: The soundtrack. Music has always been important in previous Dirt entries, but the tunes in older games mainly served to smooth out the transitions between gameplay and menu screens.

In Dirt 5 the player is positively blasted with an awesome playlist of up-tempo alternative rock, hip hop and EDM numbers that led me to head bang like an idiot. I barely know half these artists, but this particular music selection is both insanely fun to listen to and scarily effective at getting the player’s adrenaline surging. Makes you realise how even racing games can benefit from a carefully compiled soundtrack.

There is also the added bonus that the illustrious Nolan North and Troy Baker act as characters in the fictional ‘Dirt podcast’ to accompany the progress of the single-player campaign. Whether in games or in interviews, these two voice-over legends always make an entertaining duo so it is great that their unique chemistry has found its way into yet another game.

As you’d expect, their in-game podcast feels surprisingly authentic as they will occasionally comment on the player’s progress during the show, or even react to interviews with some of the racers you’ve beaten. In the endless debate on whether or not racing games need some sort of narrative, Codemasters have found a surprisingly creative solution to add a bit of story to the player’s progress, as well as an unobtrusive method to expand the game’s world.

I appreciated that Dirt 5’s single-player campaign mode gives players the option to finish the game based on their preferred events (rather than simply forcing you to work down a checklist). The career mode still proceeds in a linear sequence, but by using a branching interlinked system the player is always given some choice on what the next type of race will be. Races are split between four primary options: Circuit races, sprints, gymkhana and path finder events.

The circuit races and sprint events are truly bog-standard and involves besting the AI drivers around the track or in a point to point chase. To keep players on their toes, the vehicle types, terrain, weather conditions and locations are constantly rotated between each of the career events. Whereas one race puts the player in off-road trucks that charge through muddy bamboo forests in China, the next offers dune buggies to race in the sunny Italian countryside.

If you crave location variety Dirt 5 can certainly deliver, but it is in the revamped style of racing that Codemasters pays the price for some of the changes they made. Dirt 5 shuns the carefully tuned handling of its predecessors and actually ends up playing much closer to your average arcade racer. Track races give so much priority to flashy and fast-paced motorsport that the absence of realism makes the experience feel quite artificial at times.

Most vehicles also feel  unresponsive as they refuse to turn unless you slow down to a crawl, and the lack of any serious damage to your car means that the track itself doesn’t sharpen your driving skills. The assortment of cars, trucks, buggies and karts do slide a little more in muddy or wet spots of the road, but the cars are not particularly reactive to different types of terrain. That is, you don’t really ‘feel’ the track through the handling.

The AI also raised an eyebrow or two out of me. Codemasters tried to create a sense of challenge by giving opponents’ cars ridiculous levels of acceleration, which is particularly obvious in how they rocket ahead from the player at the starting line. The AI is also laughably bad at taking bends. I actually won several races just by hogging the racing line around the turns while my closest opponent had no idea how to overtake my car.

Gaining a bit of traction

The most puzzling design choice by far in Dirt 5 is the total omission of proper rally gameplay. This mode of racing was precisely what distinguished Dirt games as an off-road tour de force, so it is astonishing that this component is what Codemasters decided to cut out almost entirely. Bad, very bad.

Nonetheless, while the aforementioned issues are at odds with what fans might expect in a new Dirt entry, the reckless sense of speed, ludicrous jumps and exotic locales still manage to produce a decent package. Dirt 5’s racing never quite shakes the feeling of being just a bit simplistic, but arcade lovers who can avoid taking the gameplay too seriously might just connect with what is available here. Also, there are at least some events that resemble classic gameplay.

If you have played Dirt 3, gymkhana will greet you like an old friend as this mode has been reincarnated very faithfully nine years later. Once again, gymkhana is all about turning the player into a bone fide ‘hoonigan’ by gauging how many drifts, doughnuts, jumps and 360 spins they can perform within a specified time limit. The only difference is that Dirt 5 is (thankfully) much more forgiving in terms of handing out points for every stunt you complete.

Path Finder events are just the player against the clock, and the vehicle of choice is a super-lifted ATV that looks like something Vin Diesel would have in his garage. The objective is to negotiate incredibly tricky terrain as fast as possible, and specially-designed tracks filled with rocks and steep inclines will do their best to topple the player onto their roof. A cautious use of steering, braking, and bursts of acceleration therefore make the Path Finder events a rewarding challenge.

Strangely enough, I also liked the sprint car races which involve supercharged karts with disproportionately-sized wheels used mostly for drifting around oval dirt tracks. I utterly hated this gameplay mode at first since their steering is so sensitive that it takes considerable skill and practice just to circle the track, let alone snag a win.

After getting the hang of the temperamental controls, however, stealing the gold medal in sprint car races became quite satisfying. Driving these buggies turns out to be a skillful balancing act between keeping them straight to preserve momentum, and sliding sideways around turns to avoid a collision with the barriers at the tracks’ edges.

Finally, Dirt 5 comes with a robust track editor and creation toolkit. Here you can not only race tracks that have been built by other members of the community, you can also flex your creative muscles by building some new tracks of your own. I spent hours driving in some of the outright wacky tracks and drifting gauntlets conceived by other players, and I barely scratched the surface of all the new creations being added every day.

Check out my new paint job

I have already mentioned that the variety in tracks and car types is impressive, but it is the visual design that really seals the deal here. Dirt 5 has meticulously detailed textures that will honour your fancy 4K monitor taking up the entire desk, and they become even more beautiful when combined with the most impressive screen-space reflections I have ever seen.

Seriously, I was tricked for just a second into thinking my humble GTX 1070 could suddenly pull off ray tracing. For the curious, I played on all high settings (one step down from ultra) at 1080p, and my PC clocked in at around 45-55 frames per second.

Codemasters have also spared no expense with their in-house particle system as the fog, snow, water, fireworks, and bits of mud flying through the air look incredibly realistic. The detailed physics in these particles made the dynamic weather and time-of-day cycles feel extremely immersive, which the player can truly appreciate by playing around with the built-in photo mode.

Riders on the storm

So let me clarify that my disappointment with Dirt 5 is not because the gameplay is poorly executed. Once any series stretches past one decade it is only natural for developers to try new things to keep things from growing stale (and indeed to keep sales numbers on the rise). Admittedly, the off-road events in similar racers such as The Crew 2 and Forza Horizon 4 are superior, but Dirt 5 definitely has potential and confidence in all it has to offer.

No, my issue is that Dirt 5 cuts out too much of what has made this series so unique in the divide between simulation and arcade. Previous entries never felt like simulation racers, but players had to gain a high level of skills in handling, acceleration and braking if they wanted to end up on the podium. Dirt 5, however, could easily be rebranded to another arcade series and I wouldn’t even notice. I sincerely hope Codemasters reverts their design template back to normal in future Dirt titles.