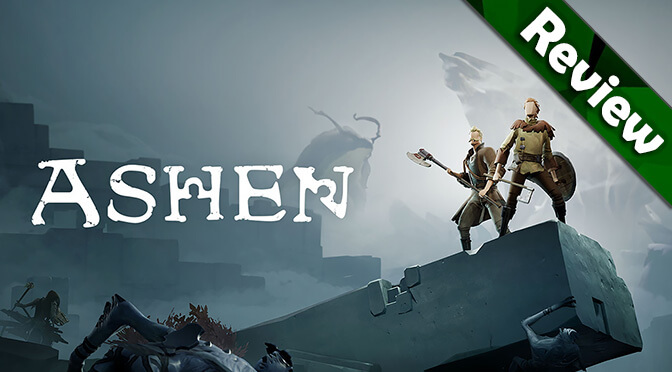 Last Thursday at The Game Awards the announcement was made: Ashen is out now, exclusive to the Epic Games Store (why?). This game, years in the making, is suddenly unleashed upon the world with almost no marketing and not available on the world’s largest game store (Steam). A dubious start. So what is this game, and is it worth the wait?

Ashen, quite simply, is a low-budget Dark Souls clone that’s inferior in every way. It’s fairly short, has no character choices or builds, is a bit floaty and imprecise with its combat, and has a nonsensical story. However, there is a certain charm to it if you’re a die-hard Souls-like fan, but Ashen does little to win over new players to the genre.

The Art Style: Pretty but Problematic

The most striking thing about this game ever since its 2015 reveal is the unique minimalistic art style. There’s definitely an appeal to this very bleak and drab world featuring characters with no faces. For instance, there’s some lovely views and inspiring environments that beg to be explored.

However, I can’t help but feel the art style choice was made more for the sake of easier art creation than good game design. From nearly the very start the art style gets in the way of playability. The enemies, clutter, and backgrounds blend together as mostly muted grays and browns, which limits the visual distinction needed during intense combat. More on that later.

The Story: Dark Souls but Nonsensical

From the start the game presents itself as almost absurdly inspired by Dark Souls. The introduction cutscene is a close copy of the original Dark Souls introduction…except without the quality art, excellent voice acting, and haunting atmosphere.

The story, as best as I can describe it, is about an old power that brought light to the world but fell and was consumed by the dark or something. You’re trying to figure out a way back to the light. Maybe.

The game also falls victim to fantasy term overload. There’s Listeners and Humans and Ashen and Elder Dark and Gefn (who’s totally not Gwyn from Dark Souls)…and none of this is allowed to have its time and place.

“Ake had the blood of chiefs in his veins and the brains of a fangfish in his skull.” – Eila

Dark Souls’ story gets away with ambiguity because it creates a living and breathing world for you to unravel as you play. Ashen has no such subtlety or depth here, partially because of it’s low-budget.

To prove my point, the characters speak quite seriously, with fairly low-quality voice acting (budget constraints again), as if any of their unexplained fantasy talk means something. Yet it’s easy to see that their quests are actually quite contrived, mostly being fetch or kill quests that conveniently pad out the gameplay time.

Continuing the trend of inferior copycat, the crafting/upgrade system in Ashen is also a lesser version of Dark Souls. There’s only two meaningful weapon types: one-handed and two-handed. And there’s only one upgrade path for each weapon. Your armor and shield can’t be upgraded, and the armor is simply one single piece instead of the mix-and-match sets of Dark Souls.

“A tinker without tools is like a lamp without fuel.
A dull affair indeed.” – Flokir

What’s worse is there’s not really any distinct move sets between clubs or axes or whatnot (there are no swords for some reason). Therefore, you basically pick any weapon you want and dutifully upgrade it as you collect the plentiful materials. It’s very basic and the lack of interesting choices makes this feel all rather perfunctory.

“You are stronger now, child of mine.
In spirit, in body, and in the company you keep.” – Gefn

For the first few hours I kept thinking I must be missing the system that lets me, you know, build my character! But I wasn’t missing anything. There is simply no character building system. So bizarre.

There is a simply rune system you can equip and expand as you play, giving slight boosts to stamina or whatnot. However, there’s also no magic or spell system of any kind. I guess that would have been too much to ask?

The World Itself: Looting & Climbing

Things are looking pretty bad for Ashen so far, but the world itself is a bright spot. There’s dank caves, ruined palaces, peaceful rivers, expansive plains, bandit hideouts, and more. Many of the locations are inspired by (take a wild guess) Dark Souls, but even if the creativity is lacking, exploration is enjoyable.

One big reason for the enjoyment is all the hidden treasures stashed throughout the environments. It’s good fun entering new areas for the first time and finding the nooks and crannies often containing loot. Although most of these items aren’t very helpful since the lack of crafting choices limits the rare loot. Oh well.

I should mention there’s a climbing system that lets you grapple up roughly neck-high objects. It’s a bit wonky, but it let’s you explore in some unique and cool ways…and die often as you fail to climb properly and fall to your unfortunate death…

The One Unique Thing: Your Village

I must mention the one unique aspect of Ashen: the village-building system. The tutorial has you found a small village that is basically just some fields and rocks by a river. You’ll encounter various characters in the world that will join your cause and move in to your village.

As you complete quests for various characters, you’ll visually see their houses being built. It’s a nice touch that serves to connect you to the world a bit more, and that connection is desperately needed to make things feel a bit more cohesive.

Note that there are zero choices to make regarding the building system. It’s all automatic. You don’t do anything except play and watch, which is fine I guess but a bit disappointing compared to what other games offer these days.

The Fiddly and Deadly Combat

Being a Dark Souls clone, this game lives and dies by how well balanced and solid the combat system is. On the plus side the “you can die in a moment if you’re not careful” threat is ever-present, giving a very nice sense wariness and accomplishment as you explore more dangerous and demanding encounters.

Less fortunate is the finicky controls and floaty-feeling movement. There’s very little weightiness to the combat. Often it feels like you’re just flailing about, hoping the targeting system puts you in the right attack direction.

The combat balancing is mostly good, but there are several obnoxious locations inspired by the most annoying locations of past Dark Souls games (Blighttown, New Londo Ruins, Shrine of Amana).

Ashen is weird when it comes to multiplayer. It tries for some bizarre combination of Dark Souls and Journey and it’s kind of a mess. You can join up with other real players at times. However, most of the game will likely be played with an AI companion. Although sometimes you’ll play alone because the game is either broken or maybe it’s intentional…I’m not sure.

Speaking of the AI, usually the AI companion will attack the enemies and revive you if you go down. However, there’s plenty of times the AI will get stuck, be unable to follow, may stop attacking, and will stand next to your dying body refusing to revive you. Not cool at all.

Overall, the cooperative system is unreliable. For a game that is so hard in spots and built for coop, there needs to be far better companion AI and an easier way to join up with a real world friend.

Conclusion: The Price is Too High

Ashen is a lesser Dark Souls clone with a nonsense story, no character building, messy combat, fiddly cooperative play, and a fairly small world by comparison.

On the positive side, the art style has its charms, and the village-building is a nice concept. I did enjoy my time with it, but I realize this is mostly because I’m a Souls-like fanatic who’ll enjoy even poorly made imitations.

However, there just isn’t enough quality here to justify the asking price of $40. If the game was priced at $20, I’d definitely recommend it to Souls-like fans because the game feels roughly one-third as good as a proper Dark Souls experience.