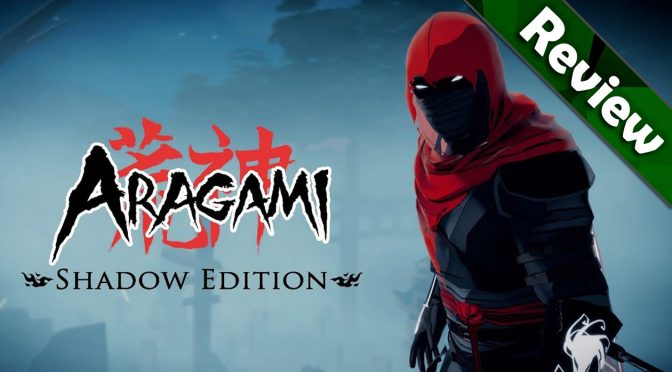 I always knew that we could count on the releases from the ‘middle shelf’ and the indie scene to keep the spirit of classic stealth gameplay alive! While perhaps not as extravagant as their big-budget counterparts, games such as Styx, Mark of the Ninja, and indeed Aragami nevertheless exist as both fan service and to remind heavyweight publishers of the potential residing in a genre that has recently fallen into neglect.

Aragami is set in a world resembling a medieval Japanese city where a spectral projection of a young girl, Yamiko, conjures the titular Aragami to help her free the Shadow Empress from imprisonment. The Empress’s realm was seized by an army that call themselves the Kaiho, and, along with Yamiko, she was locked in her own temple by their magic since the invasion. In order to free the Shadow Empress and set her wrath upon the oppressive conquerors, Yamiko guides the Aragami to six talismans that he must steal from the Kaiho in order to break the spell of their magical prison.

I know that at first glance this premise flies dangerously close to borrowed writing, but the game’s narrative actually develops into a layered and well-paced plot that kept me engrossed in its twists and turns. I cannot say much else without spoilers because with each talisman that the Aragami collects, he experiences flashbacks that disclose more information about his connection to Yamiko, the Kaiho and other characters in his mission to free the Empress.

The Aragami is a wraith of vengeance animated by dark magic, and the ace up his proverbial sleeve lies in his ability to teleport undetected between shadows. Think of a combination between the ‘swoop’ ability from the Thief reboot with ‘blink’ from Dishonored and you pretty much have what the game uses as the linchpin to make its own mark on the stealth genre.

The ability to plunge from shadow to shadow in Aragami serves both to avoid players having to brave movement through brightly lit areas as well as offering an immediate getaway to stay clear of patrolling soldiers. As a shadow entity, the Aragami is no match in combat for an army that can channel light through their weapons, and being detected usually means instant death. Yet, it is precisely this consciousness of his vulnerability that will implore players to find that ‘path’ through the shadows thus revealing Aragami’s firm commitment to providing a classic stealth approach. It is a formula that could potentially seem punishing to newcomers, but one that would feel fondly habitual to classic stealth veterans.

Still, the Aragami is no sitting duck since the game endows the player with a mix of six offensive and defensive modes of engagement that can be unlocked by collecting scrolls scattered throughout each level. For example, the Aragami can cast a decoy that instantly attracts guards towards its location, or he can create a black hole that sucks in every enemy standing nearby. He can instantly kill an approaching guard with a kunai (throwing knife), or momentarily blind him and slip past. These abilities all have familiar variations in other stealth titles like Styx or Thief, and give players access to new options for sneaking past guards when reaching the shadows becomes tricky.

Overall, Aragami is beautifully rendered by the Unity engine in a colourful, cell-shaded palette that blends 2008’s Prince of Persia with The Legend of Zelda: The Wind Waker. The levels are surprisingly vibrant for a game that takes place entirely at night and the developers, Lince Works, have put in every effort to fill the game with authentic Japanese visual themes.

While Lince Works did make use of motion capture, the characters in the game are nevertheless a bit poker-faced which did at times break the immersion somewhat. Yet this is to be expected since cutting back on animation must have saved some money on the game’s overall budget.

The audio design of the game also adds to Aragami’s strengths, and was produced by a duo of Swedish musicians called Two Feathers. While there were a few incongruous rock tracks crunched into certain segments to add a sense of action, the rest of the game’s music could easily be used for a Tai Chi class. It is a gentle, atmospheric synthesis from string quartets with traditional, Japanese instruments and gets the player into their Zen mode that only adds to the game’s overall immersion.

Early reviews were very vocal about the fact that the game suffered from performance issues at launch, but I experienced absolutely nothing of the sort on PC. This may or may not have something to do with the May 2018 patch. But in any case, it ran as smooth as I would imagine butter to run down Margot Robbie’s derrière while tanning on a hot beach.

Now while I could go on about other minor problems that I encountered during my roughly ten hours of gameplay with Aragami, I think it would be best to pause on one glaring issue: The game’s checkpoints. The comment section is there at your disposal for starting the ‘purist’ debate over whether or not a stealth game should allow you to quick save, but I personally belong to the camp that believes they should.

This is because the best stealth games reward you for playing them perfectly which means that players should be given the chance to correct their mistakes even on a first play through. Besides, forcing someone to repeatedly play large chunks of a level just because they keep failing at one specific point is a catastrophic shortcut to boredom. Sadly, it was a particularly irksome problem in this game due to some checkpoints being placed way too far apart.

Aragami was also given a co-op mode eighteen months after its initial launch on Steam called ‘Nightfall.’ It is DLC that acts as a prequel to the events that lead to the conjuring of the Aragami, and it stars two of the Empress’s assassins that briefly feature in the main game’s story. No one would play it with me because they were all still too busy with Fortnite, so I took it on solo. Honestly, it is just more of the same except with many niggles from the vanilla game ironed out and with a little more attention to visual fidelity in the textures. You also get some additional skins for the old shadow ninja himself.

While Aragami would make a fine addition to a stealth enthusiast’s collection, it can certainly appeal to newcomers with its compelling narrative and enthralling aesthetics. Placed in the skeletal list of games that embrace classic stealth mechanics in today’s market, the game is practically a tribute to the genre. There have certainly been more refined entries in recent years, but I would be hard pressed to name another game that comes as close to their strengths as Aragami does. Shall we leave it up to smaller developers to bring about the resurgence of classic stealth? I hope so.