Square Enix has released a new set of screenshots for Marvel’s Avengers, showcasing Kamala’s Hideout. These screenshots show off the game’s graphics, though, they do not represent the quality of the final product.

In Marvel’s Avengers, Kamala Khan must apply her intellect, optimism, and unique abilities to the task of unravelling a global conspiracy and reassembling her personal heroes in time to stop a new secretive organization, Advanced Idea Mechanics (AIM), before they unleash one of the greatest threats Earth has ever faced.

Players first encounter a young Kamala during A-Day, where Captain America, Iron Man, Hulk, Black Widow, and Thor are unveiling a hi-tech Avengers Headquarters in San Francisco. This is the first mission that Square Enix first showcased. The celebration turns deadly when a catastrophic accident results in massive devastation. Kamala is exposed to the mysterious Terrigen Mist, and finds herself developing extraordinary polymorphic powers, which she subsequently hides for years. 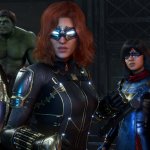 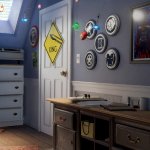 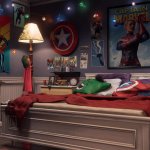 Blamed for the tragedy, the Avengers disband. Five years later, Kamala uncovers a shocking conspiracy. Thus, she embarks on a quest to reassemble the heroes she believes in.

Players begin the journey as Kamala Khan and learn the origins of her extraordinary powers. As the story expands, Kamala plays an essential role in bringing the disbanded Avengers back together. As each Super Hero joins the roster, players must master all of their unique abilities. Players will also have to rebuild and customize the Avengers team to face increasingly growing threats only the Avengers together can defeat.

We expect Marvel and Square Enix to release a new gameplay trailer on June 24th. Until then, enjoy these latest Marvel’s Avengers screenshots!