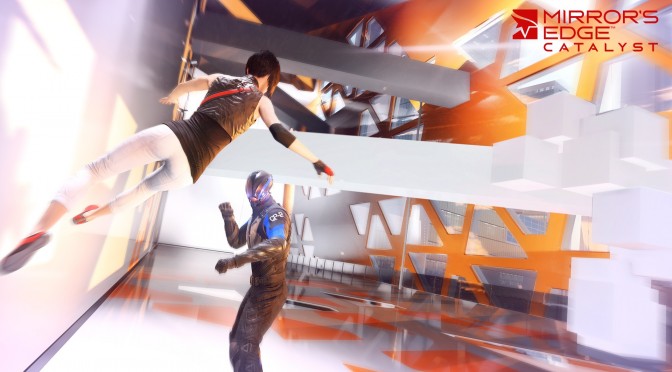 Mirror’s Edge Catalyst’s closed beta features the very same mission that was showcased back in August 2015, in the first gameplay trailer for DICE’s open-world runner. Therefore, we decided to compare these two builds and see whether the closed build came close to that first gameplay trailer.

As you can see, DICE was able to offer what it showcased back in August 2015. There are some minor differences, however the game features all the visual techniques that were used back in its August 2015 build.

The biggest difference between these builds is the light bleeding. Now some may be fans of the former light bleeding, however you can achieve a similar light bleeding effect via Reshade. Apart from that (and Faith’s mirror effects that are not as overused as in the August 2015 build, while jumping at the end of the mission) there are no real changes between these two builds.

Reflections, Global Illumination, anamorphic lens-flares,  and environmental destruction are all present in the closed beta build. In addition, it appears that all the characters are as highly detailed as they were back in August 2015.

The August 2015 build is on the left, whereas the Closed Beta build is on the right. We’ve also kept MSI Afterburner active as some users complained about underwhelming performance even on high-end GPUs. As you can see, Mirror’s Edge: Catalyst ran amazingly well on our system.