Focus Home Interactive has released the first screenshots for Blood Bowl 2 and surprisingly enough, this unique sports title seems to be packed with great visuals. As the press release reads, the following two screenshots show the human, Blitzer, one of the most versatile players on the human teams, in action and ready to face whatever the opposing team can throw at him.

Developed by Cyanide Studios, Blood Bowl 2 aims to be even more ambitious than its predecessor, with a fabulous look and a variety of extra features. Its brand new graphics engine has been specifically developed for this sequel, enabling the game to display high-quality visuals, graphic and sound effects, taking the Blood Bowl licence to the next level.

Blood Bowl 2 also has a host of new features in both Solo and Multiplayer modes that make it more accessible for first-time players and more enjoyable for seasoned veterans. The stunning and ambitious Solo campaign puts players at the head of one of the most famous teams in Blood Bowl’s universe, who will compete in some original and truly unique matches to take their team to the top. League mode allows players to manage their own team, club and even stadium, as all these features are fully modular! We will soon reveal some substantial and striking innovations that make Multiplayer mode even more thrilling. 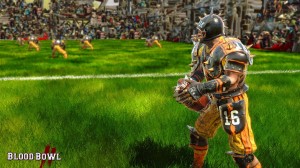 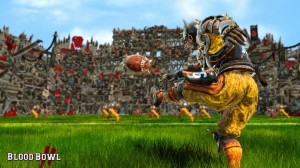