Microids has just released a remake of XIII on the PC. Developed by PlayMagic and powered by the Unity Engine, it’s time to benchmark it and see how it performs on the PC platform. 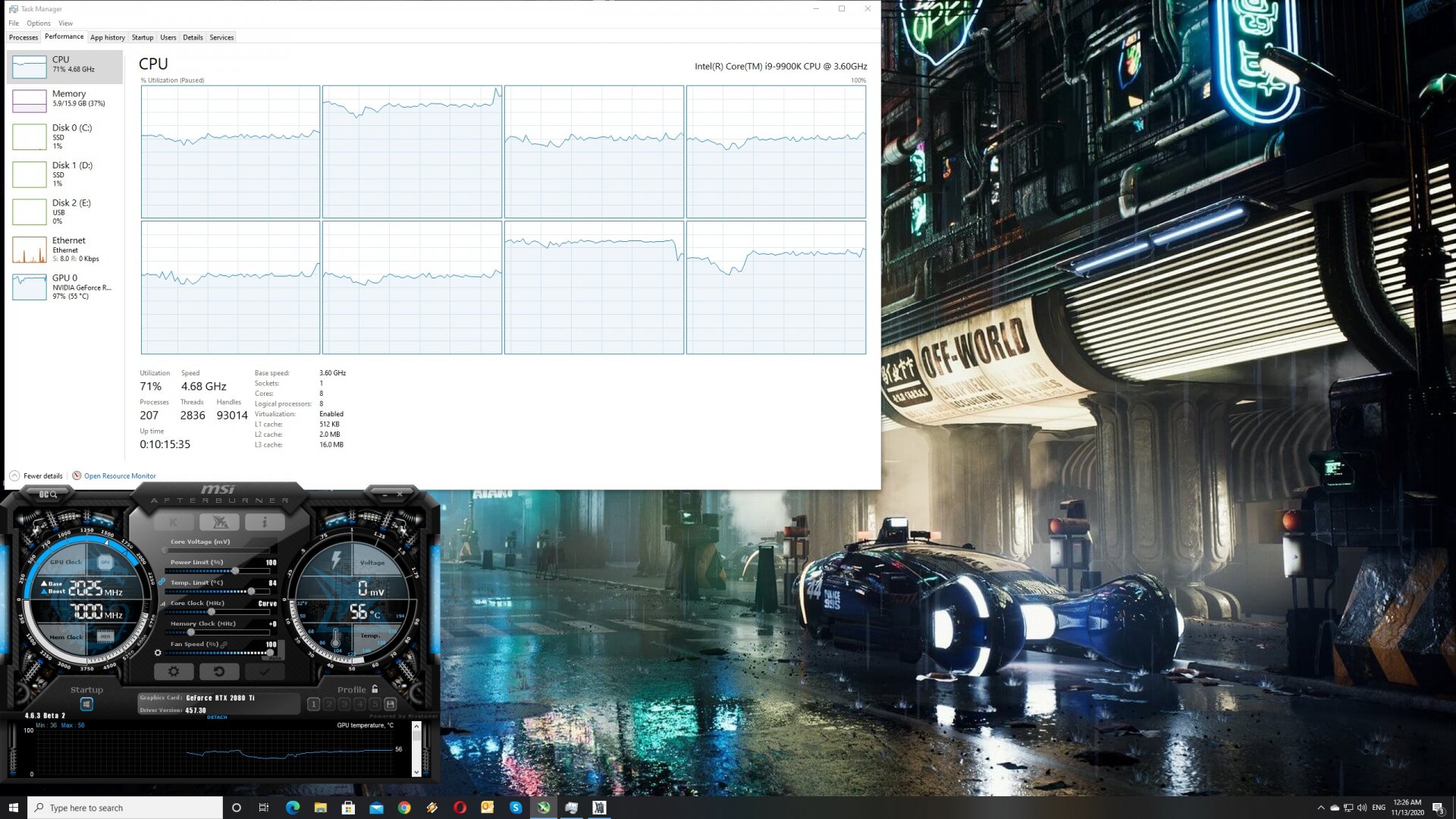 PlayMagic has added a respectable number of graphics settings to tweak. PC gamers can adjust the quality of Textures, Volumetric Distance, Shadows, Motion Blur, and LOD Distance. There are also options for Anti-aliasing, Bloom, Screen Space Reflections, Chromatic Aberration, and Anisotropic Filtering. The game also supports uncapped framerates and 4K resolutions, though we had a lot of trouble enabling 4K on our 1440p monitor (we had to set our desktop resolution to 4K. Upon restarting the game, it was sometimes reverting back to the native resolution).

Now let’s start with some good news. XIII Remake does not require a high-end CPU. In order to find out how the game scales on multiple CPU threads, we simulated a dual-core, a quad-core and a hexa-core CPU. And, we are happy to report, that even our simulated dual-core system was able to provide a smooth gaming experience. Do note, though, that the game does not benefit at all from Hyper Threading. Thus, we strongly suggest disabling it in this particular title. 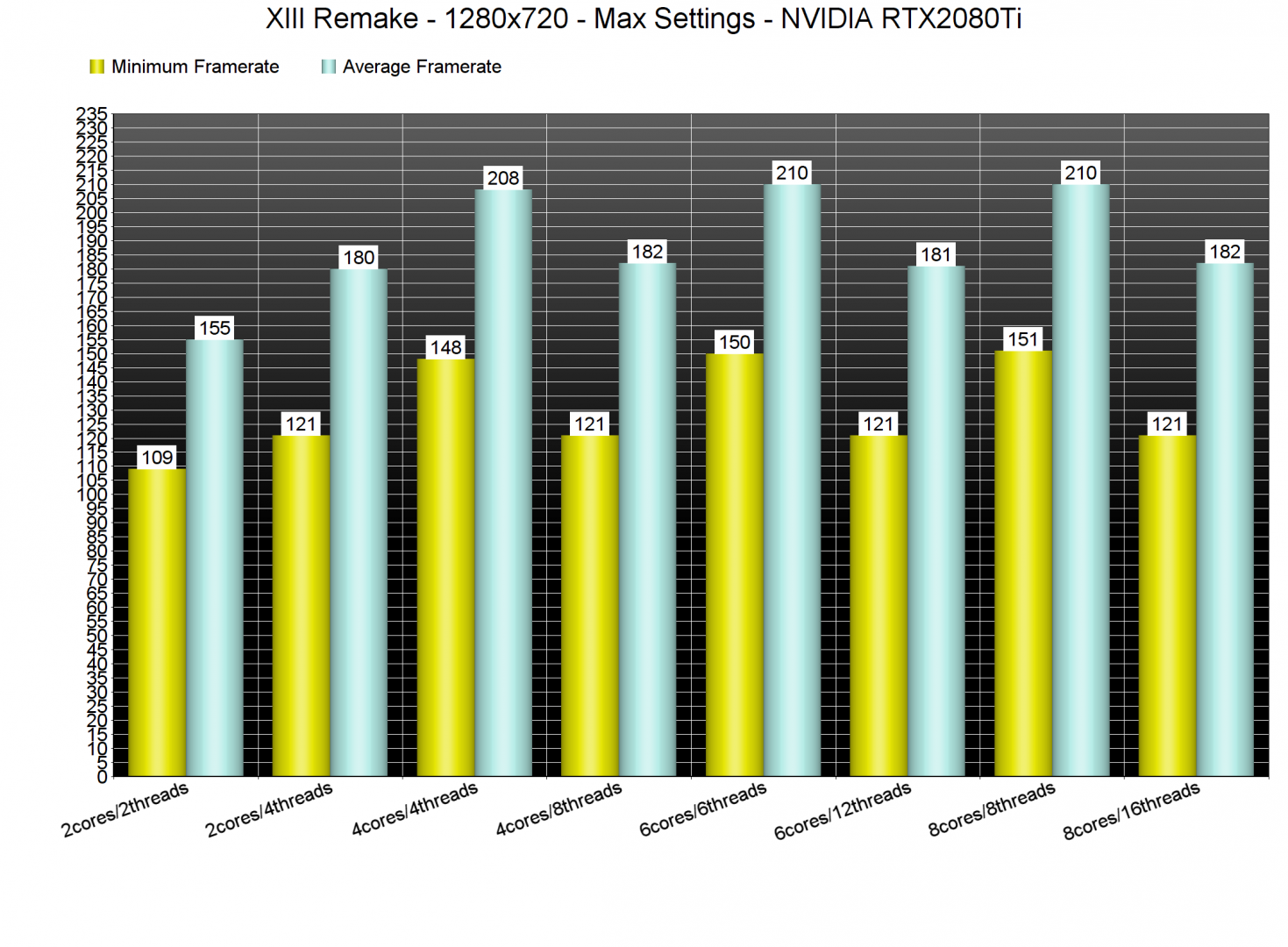 Our Intel i7 4930K was also able to run the game without any performance issues. Truth be told, there was a performance difference between the i7 4930K and the i9 9900K at 1080p/Max Settings. However, this older-gen Intel CPU was able to push over 100fps at all times. 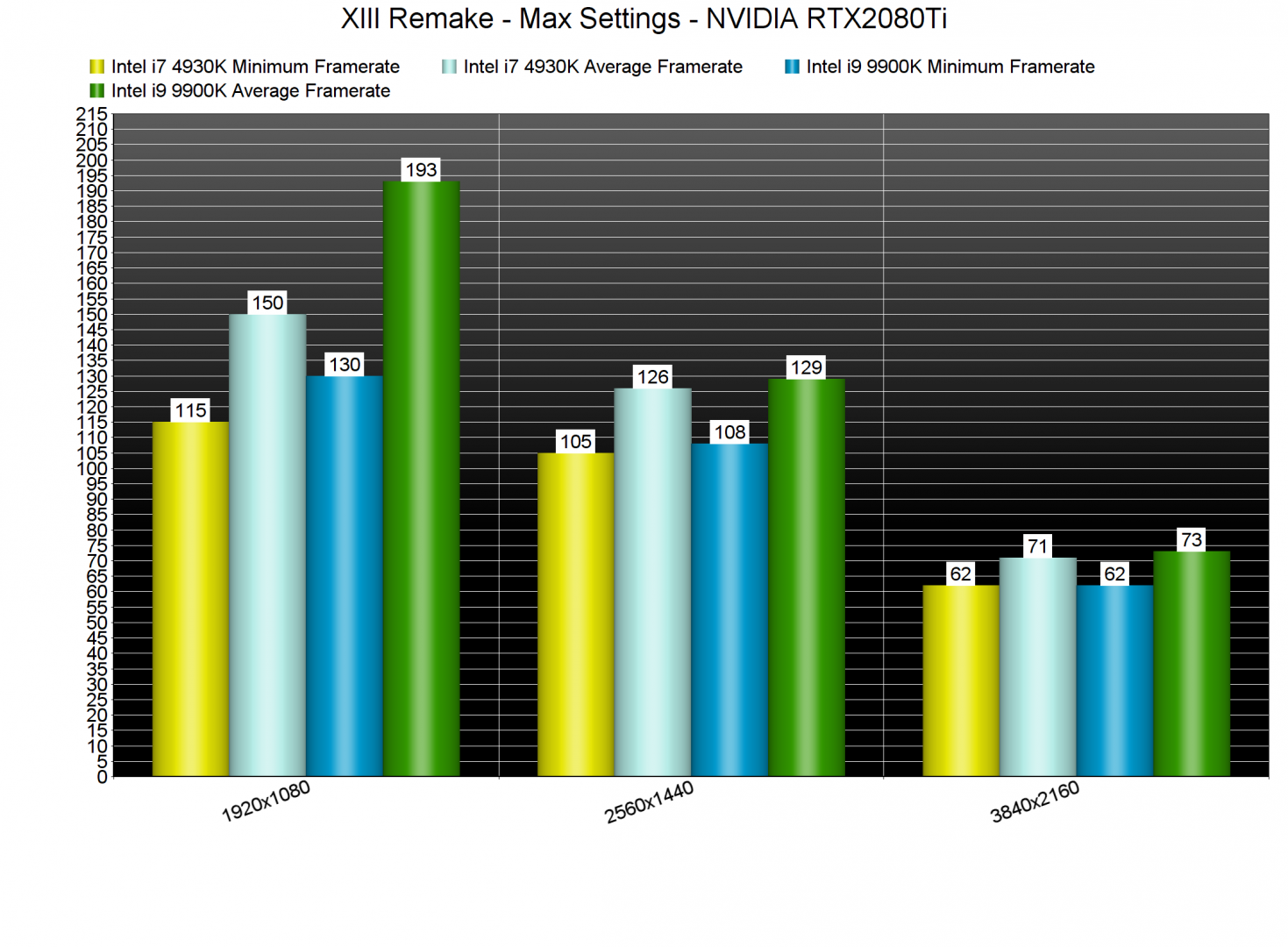 XIII Remake can also run on a wide range of GPUs at 1080p. Our AMD Radeon RX580 was able to push a minimum of 76fps and an average of 82fps. Contrary to other recent games, AMD’s GCN GPUs run this game as intended at lower resolutions. 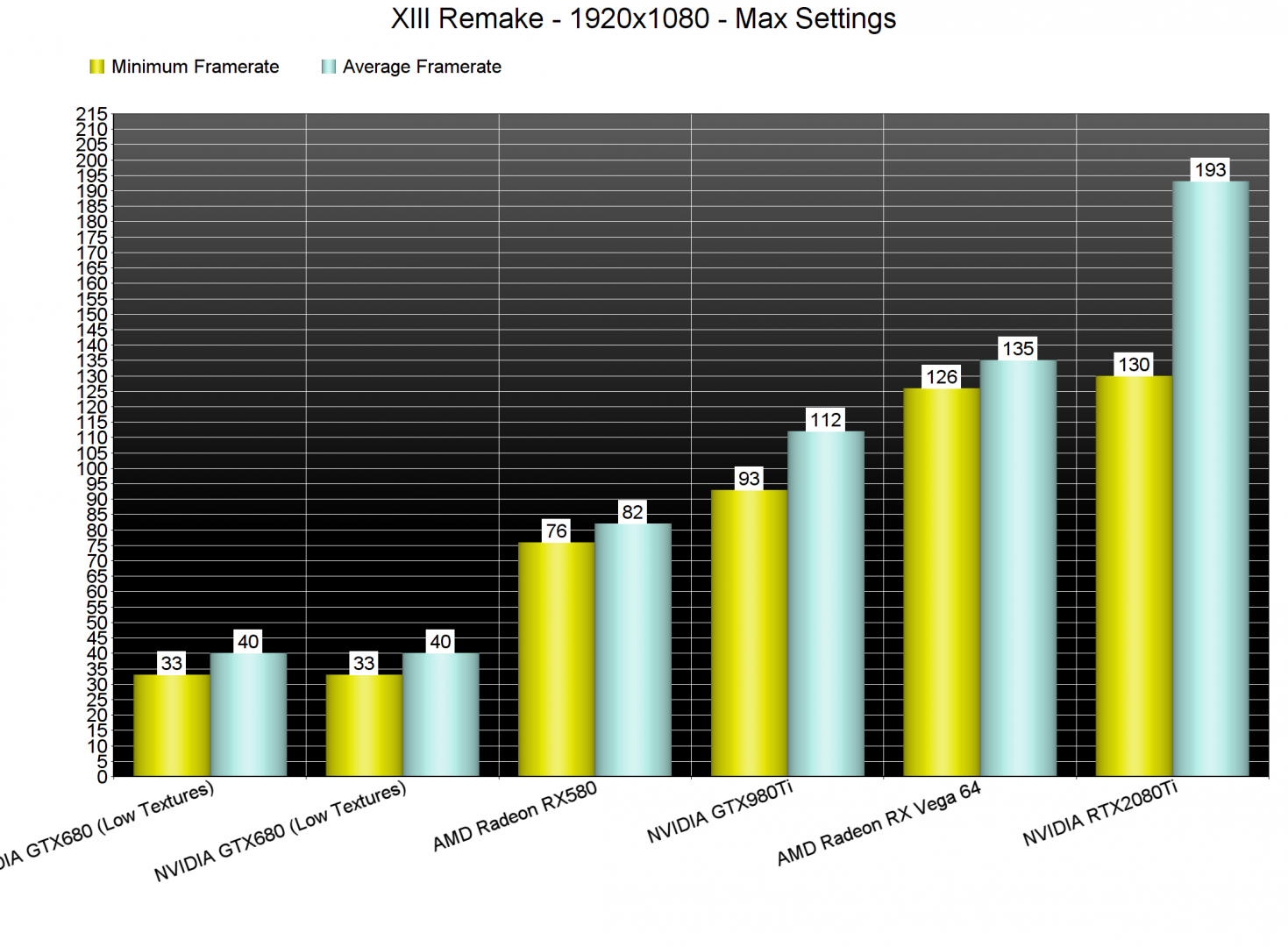 At 1440p/Max Settings, our top three GPUs were able to provide a smooth gaming experience. However, XIII Remake was surprisingly taxing at 4K. As we can see, our RTX2080Ti struggled to run the game with constant 60fps. Interestingly enough, our AMD Radeon RX Vega 64 also performed worse than the GTX980Ti at 4K. 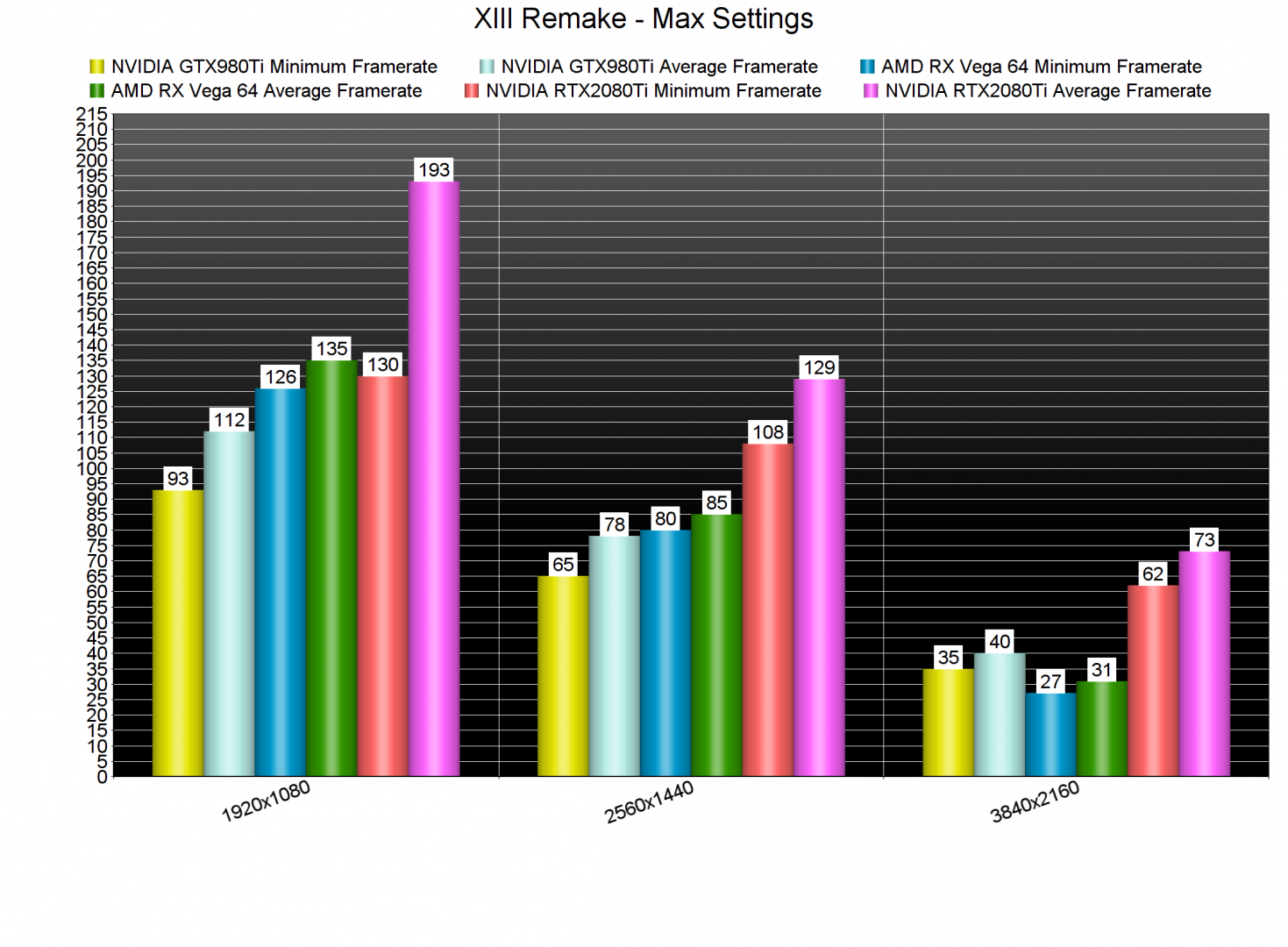 Graphics-wise, XIII Remake is not that good looking. Some animations are capped at 30fps, and this remake lacks the art style of the original version. There are some cool lighting effects, however, everything looks like a game that came out on PS3. The character models are not that detailed, the textures are not that good… yeah… does not look great. Not only that, but these underwhelming graphics do not justify the GPU requirements for gaming at 4K. For instance, Doom Eternal, a game that looks one (or even two) generations ahead of it looks and runs better.

It’s also worth noting that the PC version suffers from some truly awful mouse controls. For some reason, PlayMagic has implemented two different sensitivity settings for the mouse (when moving and when moving), and you can’t adjust them separately. As such, aiming feels awful in this game. The AI is also laughably bad.

In conclusion, XIII Remake is a disappointing remake. While the game can run on a wide range of PC systems, its graphics do not justify its requirements. The game also suffers from awful AI and major mouse control issues. Microids promised that future patches will improve performance on a variety of levels, however, this may be too little too late.