When the closed beta phase for Warhammer 40K: Dawn of War III began, we were a bit worried about the game’s performance. You see, that build ran extremely awful on our test machine. Yes, this was a beta build but let’s be honest; the final builds of most games, these days, run exactly the same with their beta builds. Thankfully, Dawn of War III is an exception as it received some significant performance improvements.

For this PC Performance Analysis, we used an Intel i7 4930K (turbo boosted at 4.2Ghz) with 8GB RAM, NVIDIA’s GTX980Ti and GTX690, Windows 10 64-bit and the latest WHQL version of the GeForce drivers. NVIDIA has not included yet an official SLI profile for Dawn of War 3 in its latest driver, and so far AFR2 brings negative SLI scalability. We did not find any SLI bits that could offer acceptable SLI scalability, therefore we strongly suggest owners of older SLI systems to avoid this title (until NVIDIA adds SLI support for it).

It’s also worth noting that Dawn of War III uses the Denuvo anti-tamper tech. We did not notice any performance issues that could be related to this anti-tamper tech but since we know that some of our users boycott games powered by it, we thought we should let you know about it.

Dawn of War III comes with very few graphics settings to tweak. PC gamers can choose their resolution (though this option was not working at all in our PC review code. As such, we could not test the game in 4K or in 720p), adjust Game Resolution (does not offer anything beyond 100%), Image Quality, Texture Detail, Anti-Aliasing, Unit Occlusion and Physics. And that’s it. 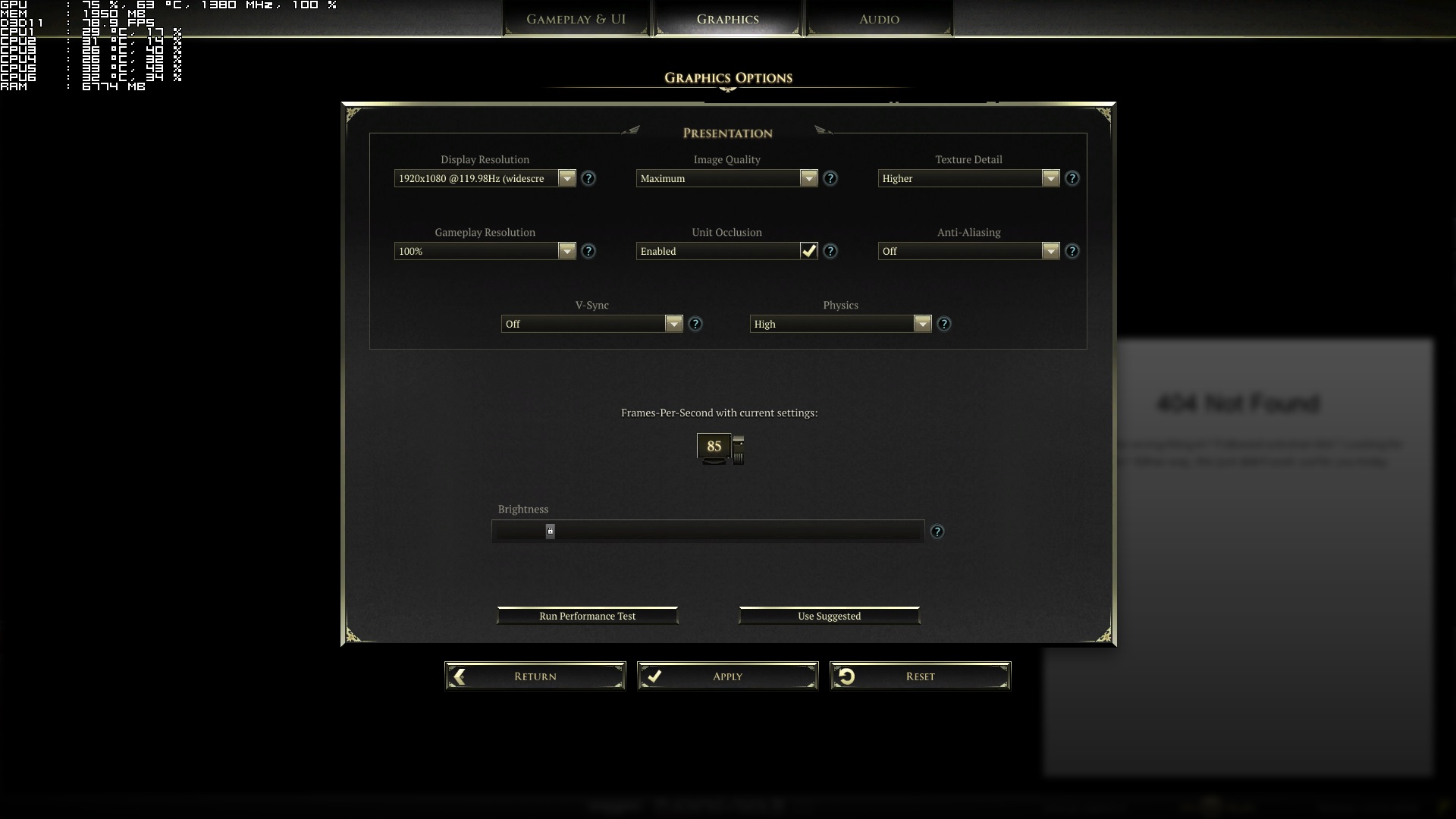 To be honest, for a PC-only title, we kind of expected more advanced graphics options. Still, Relic has implemented a benchmark test that will give you an idea of how the game will run on your hardware. Not only that, but the team has added an option that shows the average framerate of the game with the settings you’ve selected. Now this is a pretty cool option as it will make it easier for you further tweak the game’s graphics settings.

Dawn of War III’s benchmark tool does not display any average framerate numbers. As such, we’ve decided to measure our minimum framerates during that benchmark. Also note that this is a stress test and shows one of the very few scenarios in which there are a lot of units on screen. Most of the times, the actual game runs better than it. 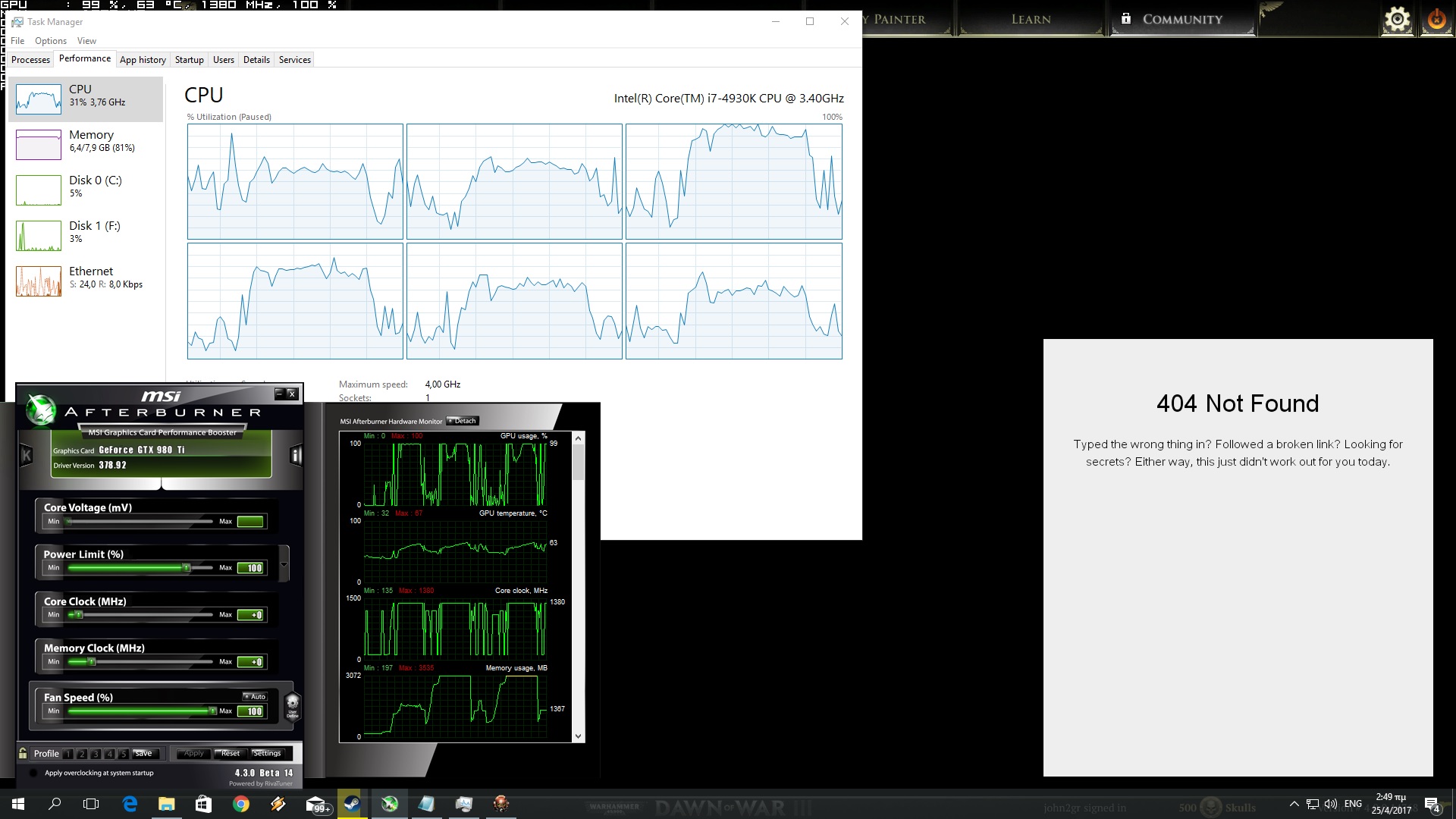 Dawn of War III appears to be stressing only one CPU core/thread. While the game also uses additional threads, it does not take full advantage of them, and we did not notice any performance improvements when we enabled Hyper Threading. Moreover, the game does not use DX12 or Vulkan. As such, we noticed some minor performance issues when there were a lot of units on screen. Whether this is caused due to the increased number of the overall draw calls or not remains to be seen (as both our CPU and GPU were underused during these scenes). 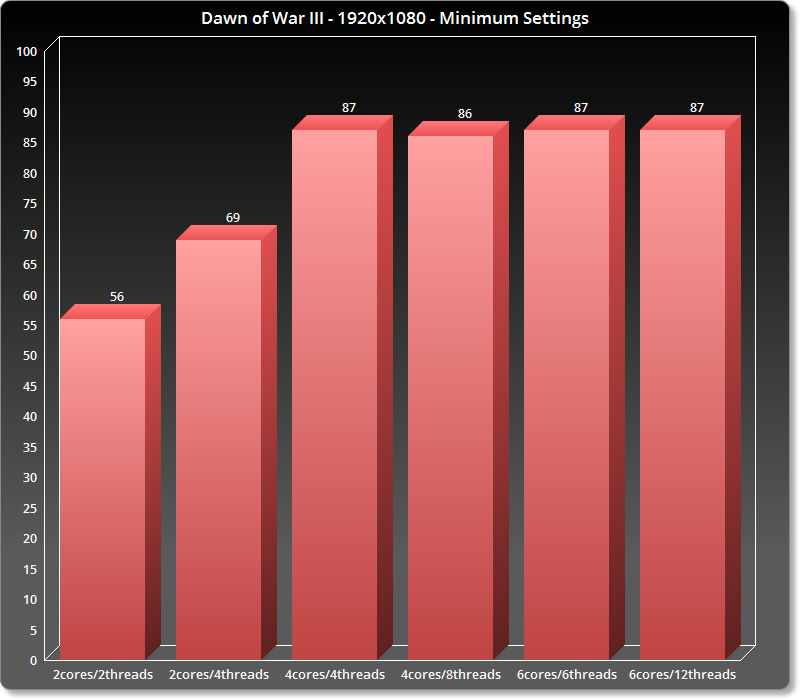 Now while Dawn of War III suffers from the aforementioned optimization issues, we were able to achieve a stable 60fps experience at 1080p on Maximum Details (though we had to lower Anti-Aliasing to Low). Moreover, it appears that Anti-Aliasing will be the option that most PC gamers will have to lower in case they are facing performance issues, as we noticed a 30fps hit when moving from Low to High. 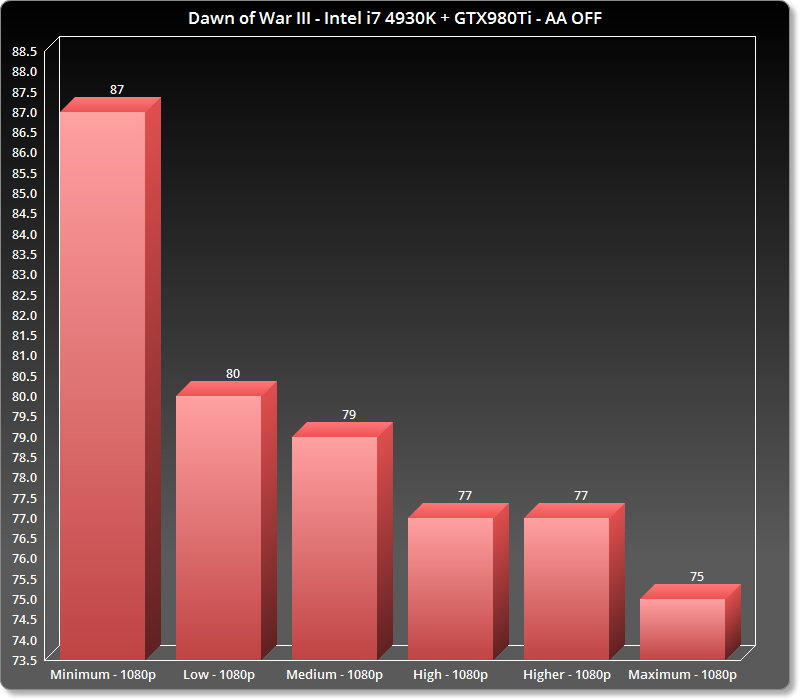 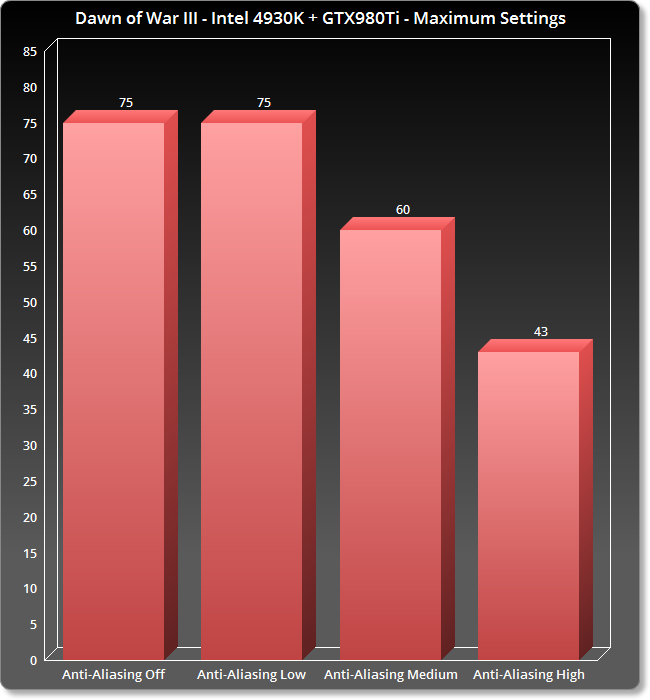 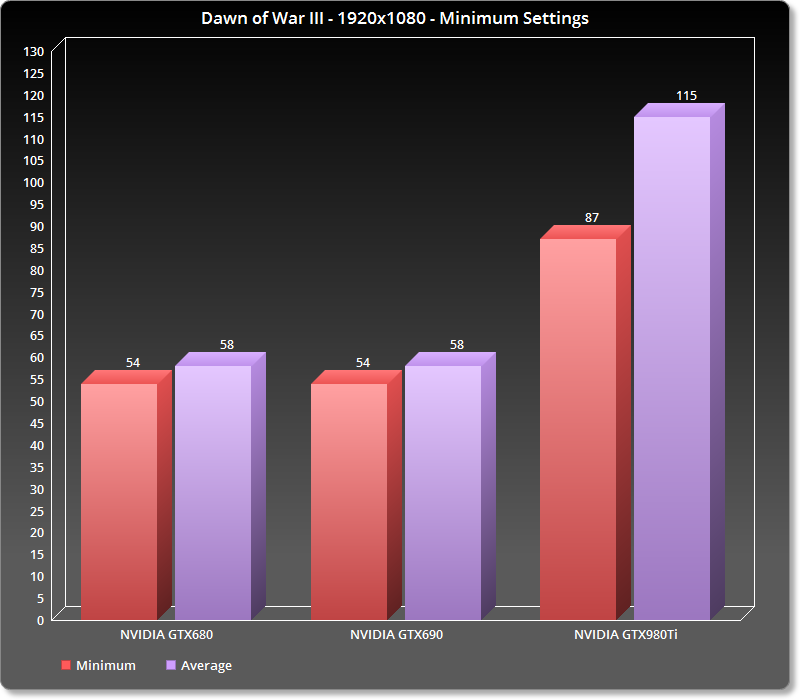 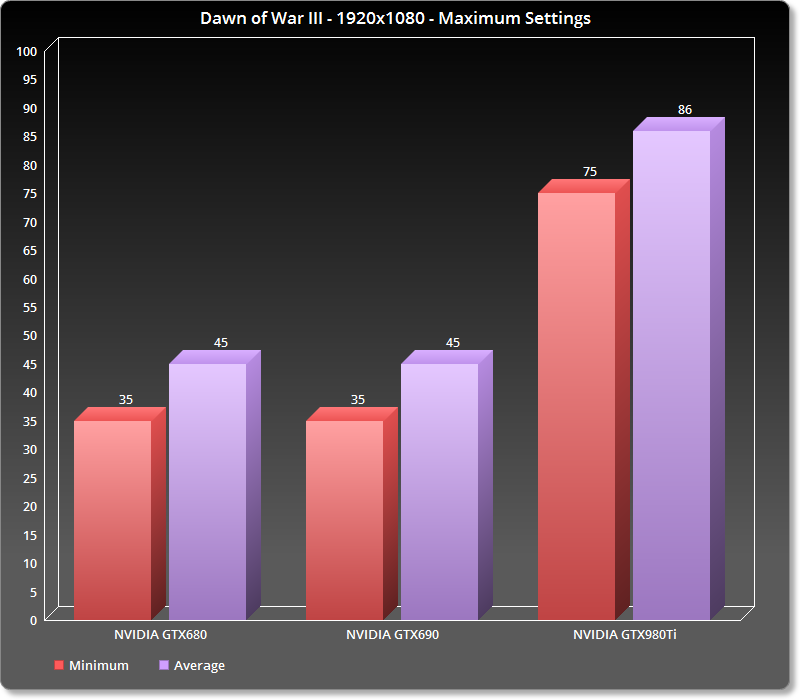 Graphics wise, Dawn of War 3 is a beautiful strategy game. The game comes with lots of explosions and physics-based scripted events, and most of the units are highly detailed. The environments look great, the art design is exceptional, there are a lot of cool effects (like soft-particles and smoke, as well as a lot of blood), and enemies can be blown to pieces. While the game does not feature visuals that will ‘wow’ you (and to be honest I have not encountered any strategy game that made my jaw drop with its visuals), it is definitely pleasing to the eye.

All in all, Dawn of War 3 runs remarkably well on the PC platform. Even though the game does suffer from various CPU optimization issues and does not come with extensive graphics settings, it runs with an almost stable 60fps on a variety of PC systems, and scales well on older graphics cards. The game also comes with a benchmark tool via which you can easily test the game in order to see how both its single-player and multiplayer modes will perform. Here is hoping that NVIDIA will release an SLI profile for this title, and that Relic will further optimize and address the game’s CPU optimization issues via future patches! 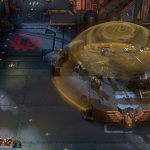 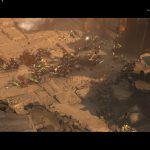 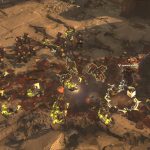 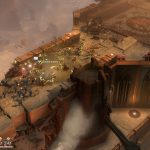 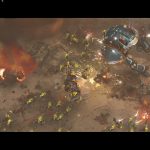 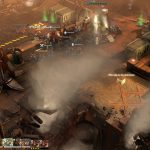 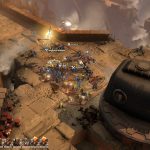 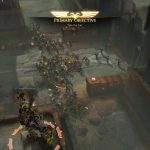 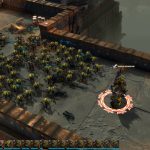 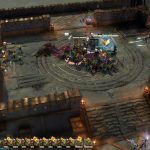 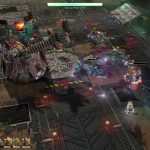 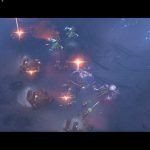 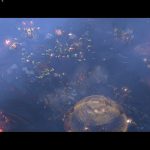 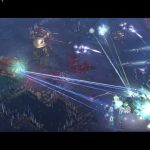