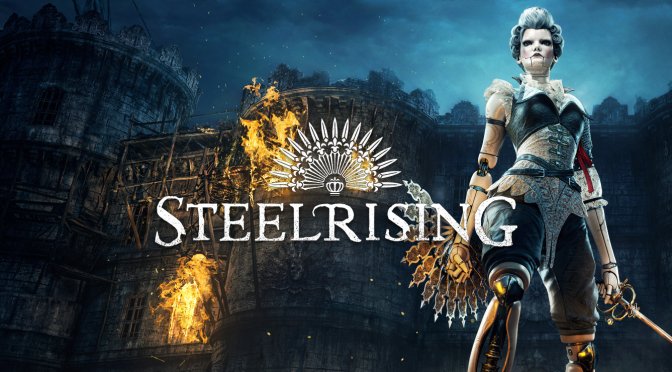 NACON has just released the new Souls-like game from Spiders, Steelrising. Powered by Spiders’ in-house engine, the Silk Engine, it’s time now to benchmark it and see how it performs on the PC platform. 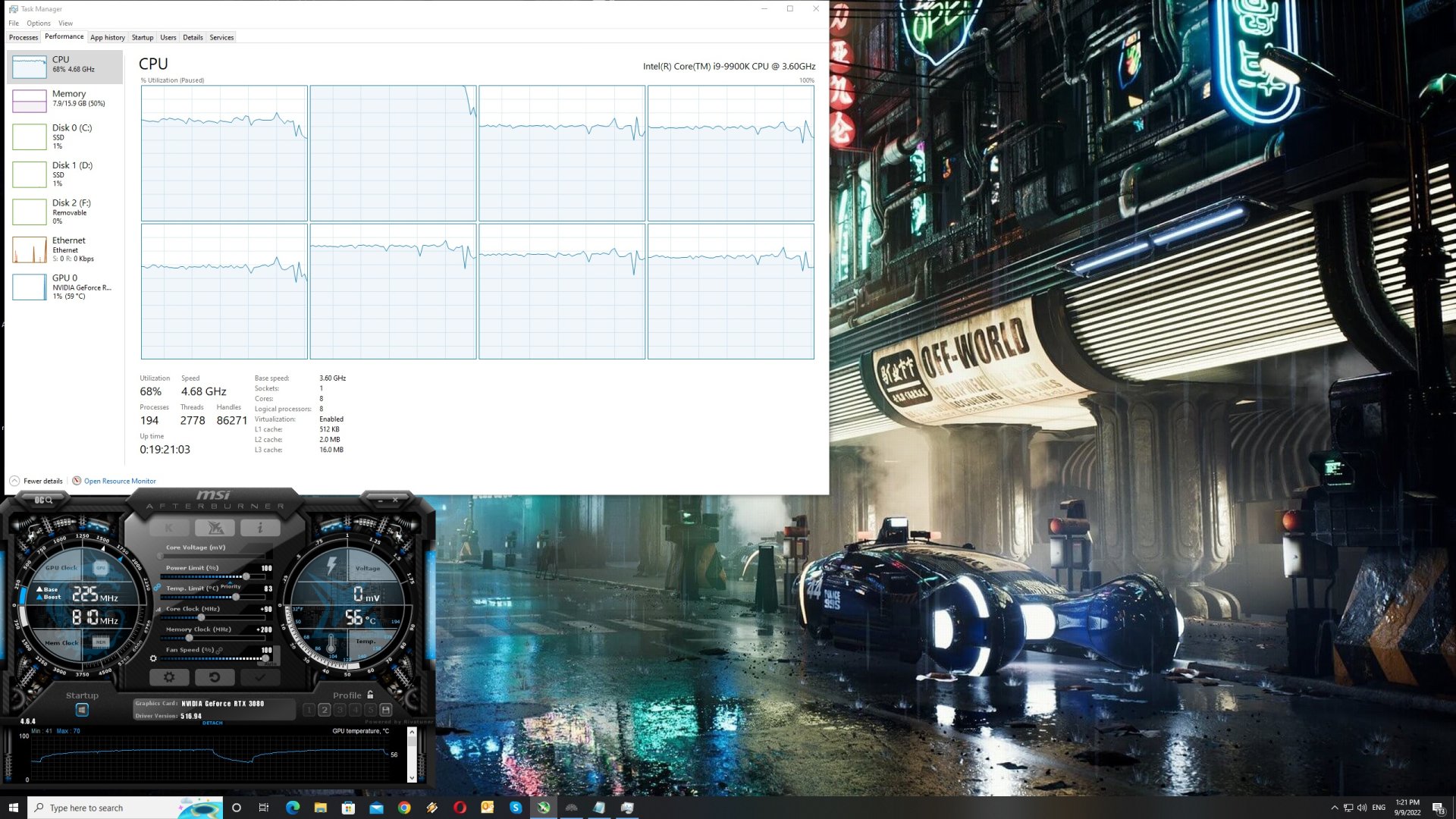 Steelrising comes with a respectable amount of graphics settings to tweak. PC gamers can adjust the quality of Textures, Models, Foliage, Shadows, Particles and more. The game is also using Ray Tracing in order to enhance its reflections. Unfortunately, though, the game does not have a lot of reflected surfaces (at least at the beginning). Thus, most of you won’t see any visual improvements (which also explains the minimal performance hit of these Ray Tracing effects). Furthermore, Steelrising supports NVIDIA’s DLSS and AMD’s FSR 1.0 AI upscaling techs.

Since the game uses FSR 1.0 and not FSR 2.0, we don’t really recommend it (unless there is nothing you can do in order to improve overall performance). On the other hand, NVIDIA DLSS does an excellent job at matching native resolution. Below you can find some comparison screenshots between native 4K (left) and NVIDIA DLSS Quality (right). Seriously, these screenshots look identical. Therefore, and since DLSS offers a noticeable performance boost, we highly recommend enabling it. Truth be told the performance increase is not close to what we’ve seen in other games. Still, this can be considered a free performance boost for all RTX GPU owners. 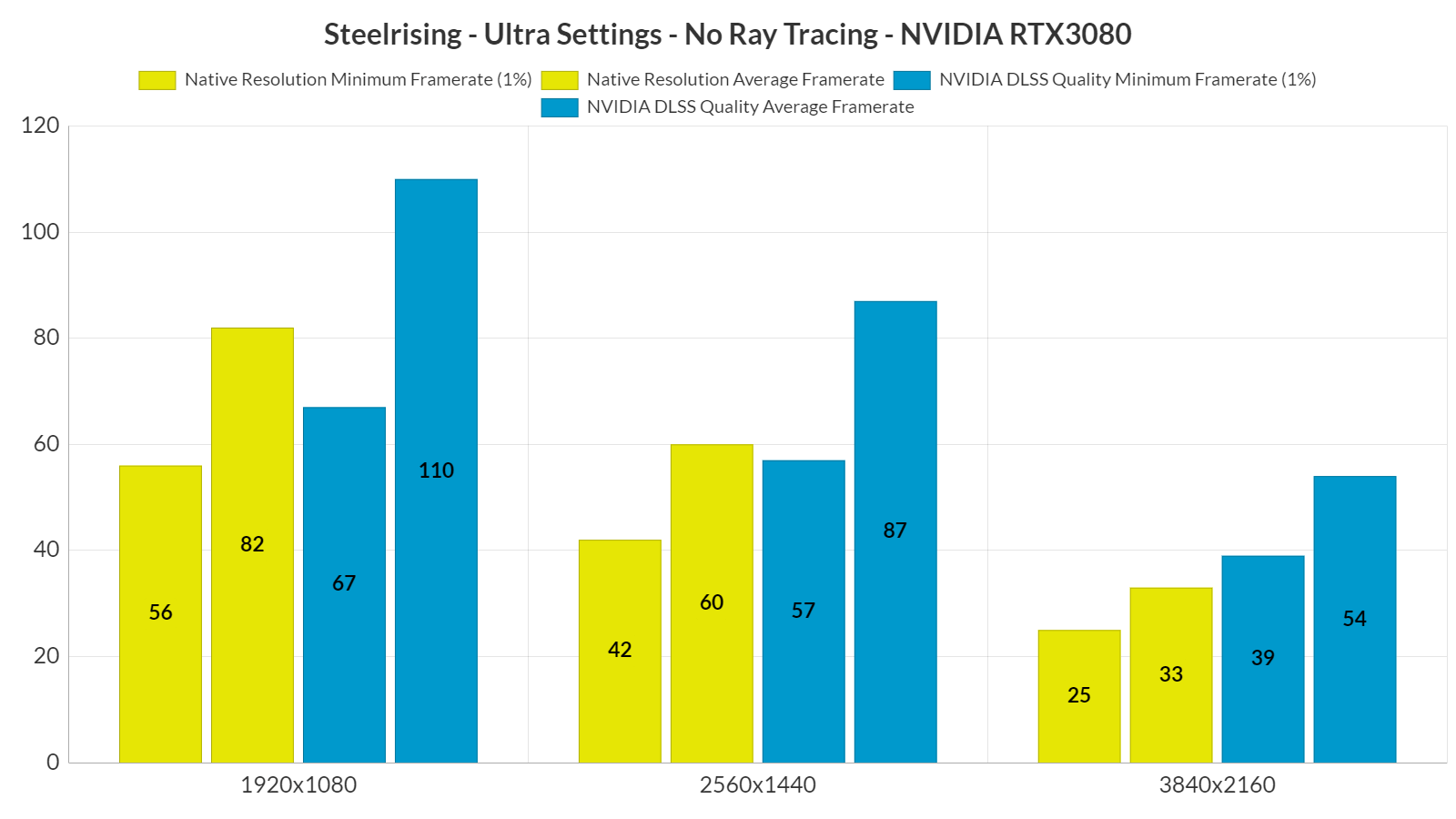 Steelrising does not feature any built-in benchmark tool. Thus, and for both our CPU and GPU benchmarks, we used the following scene. This scene appeared to be one of the most demanding areas of the game. Therefore, consider these as stress benchmarks as other areas may run noticeably faster.

In order to find out how the game scales on multiple CPU threads, we simulated a dual-core, a quad-core and a hexa-core CPU. Without Hyper-Threading, our simulated dual-core system was unable to offer a playable experience due to severe stutters. However, and once we enabled Hyper-Threading, we were able to get a constant 60fps experience at 800x600 on Ultra Settings with NVIDIA DLSS. Now the reason we dropped so low our resolution and used NVIDIA DLSS is because Steelrising is a GPU-bound title. Without DLSS, we were GPU limited at 800x600, even when using an NVIDIA GeForce RTX 3080. 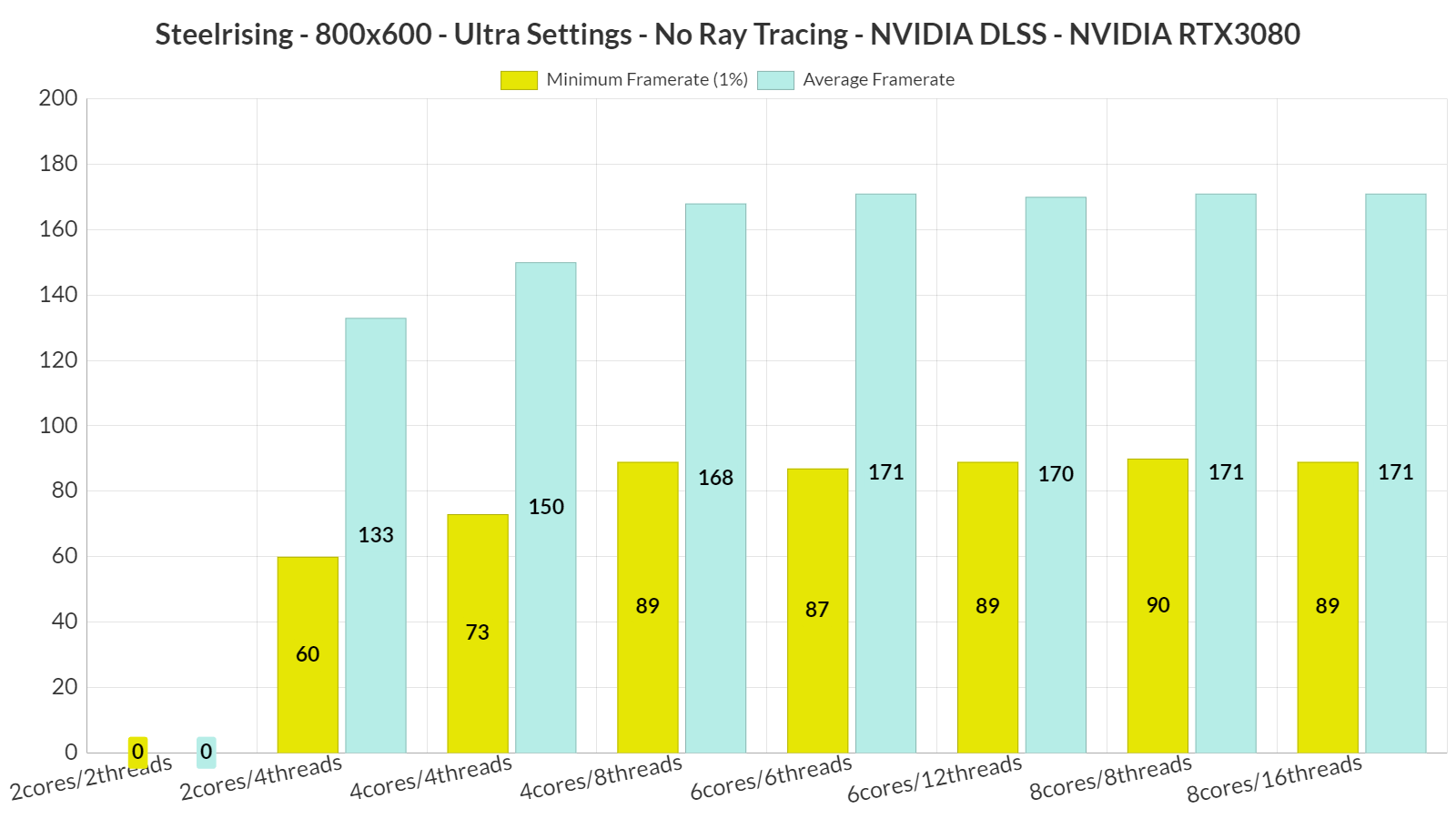 At 1080p/Ultra/No Ray Tracing, there wasn’t any GPU that could offer a constant 60fps experience. Yes, both our NVIDIA RTX3080 and AMD Radeon RX 6900XT had drops below 60fps. Again, our benchmark scene is a worst-case scenario. Regardless of that, though, it’s pretty clear that the game currently has optimization issues. Seriously, there is nothing on screen justifying these ridiculously high GPU requirements. And, as we’ve already reported, the game’s Ultra Textures require more than 13GB at 1080p. 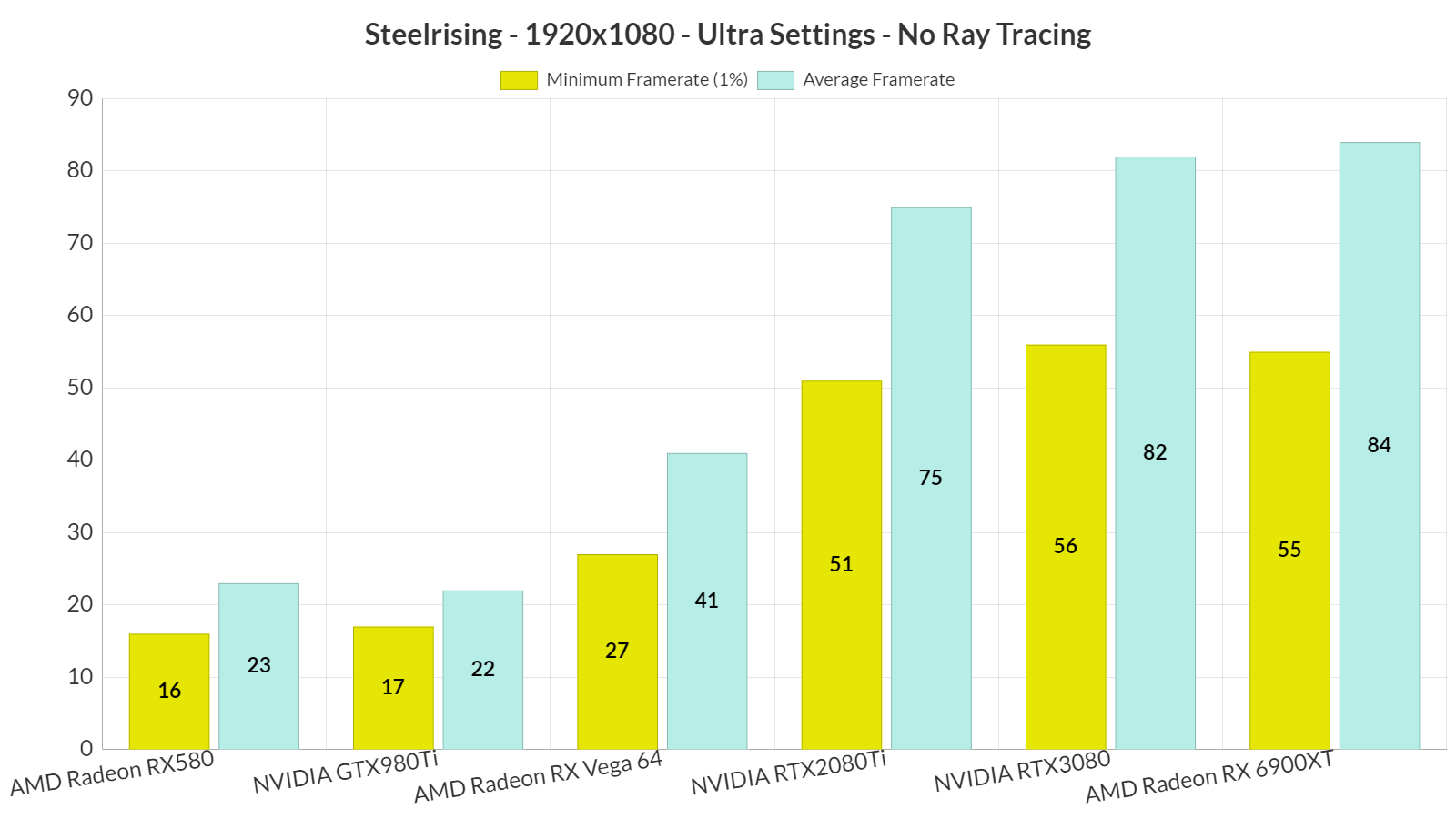 At 1440p/Ultra/No Ray Tracing, there wasn’t any GPU that could offer an enjoyable experience. After all, both the RTX3080 and the RX 6900XT had drops below mid-40fps. And as for 4K… yeah, good luck with that without using DLSS. 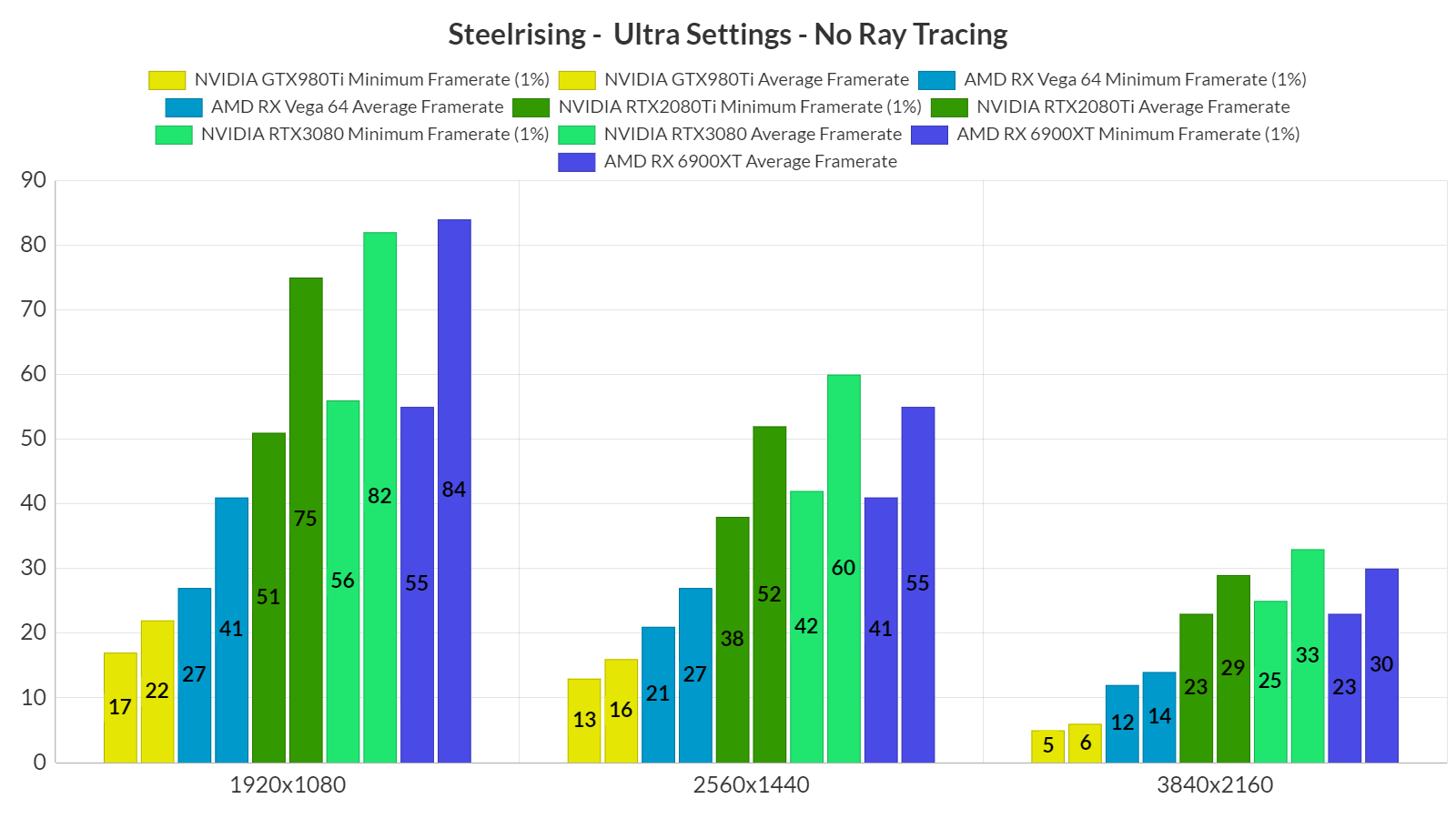 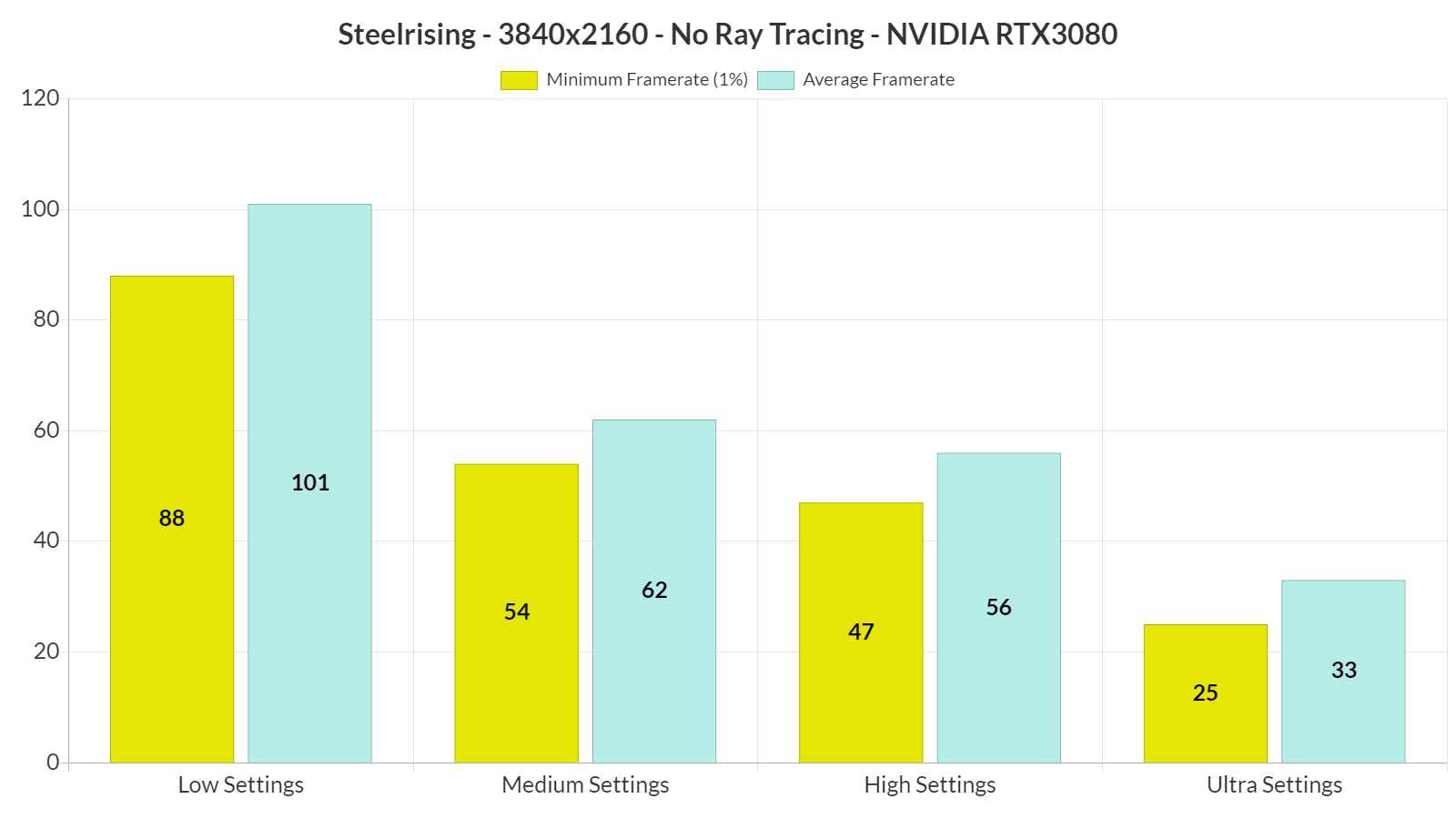 All in all, Steelrising has major optimization issues. Although the game does not require a high-end CPU, it certainly requires a powerful GPU, even for gaming at 1080p. And, as we’ve already said, there is nothing on screen to justify these high GPU requirements. Yes, Spiders is a small team so we can’t expect miracles. However, the team should simply ditch the Silk Engine if it’s unable to properly optimize it!