State of Decay 2 is a new survival game in which players must build new communities and promises to immerse players in an all-new, multiplayer zombie survival fantasy. The game has just been released exclusively on the Windows Store and it’s time to benchmark it and see how it performs on the PC platform. 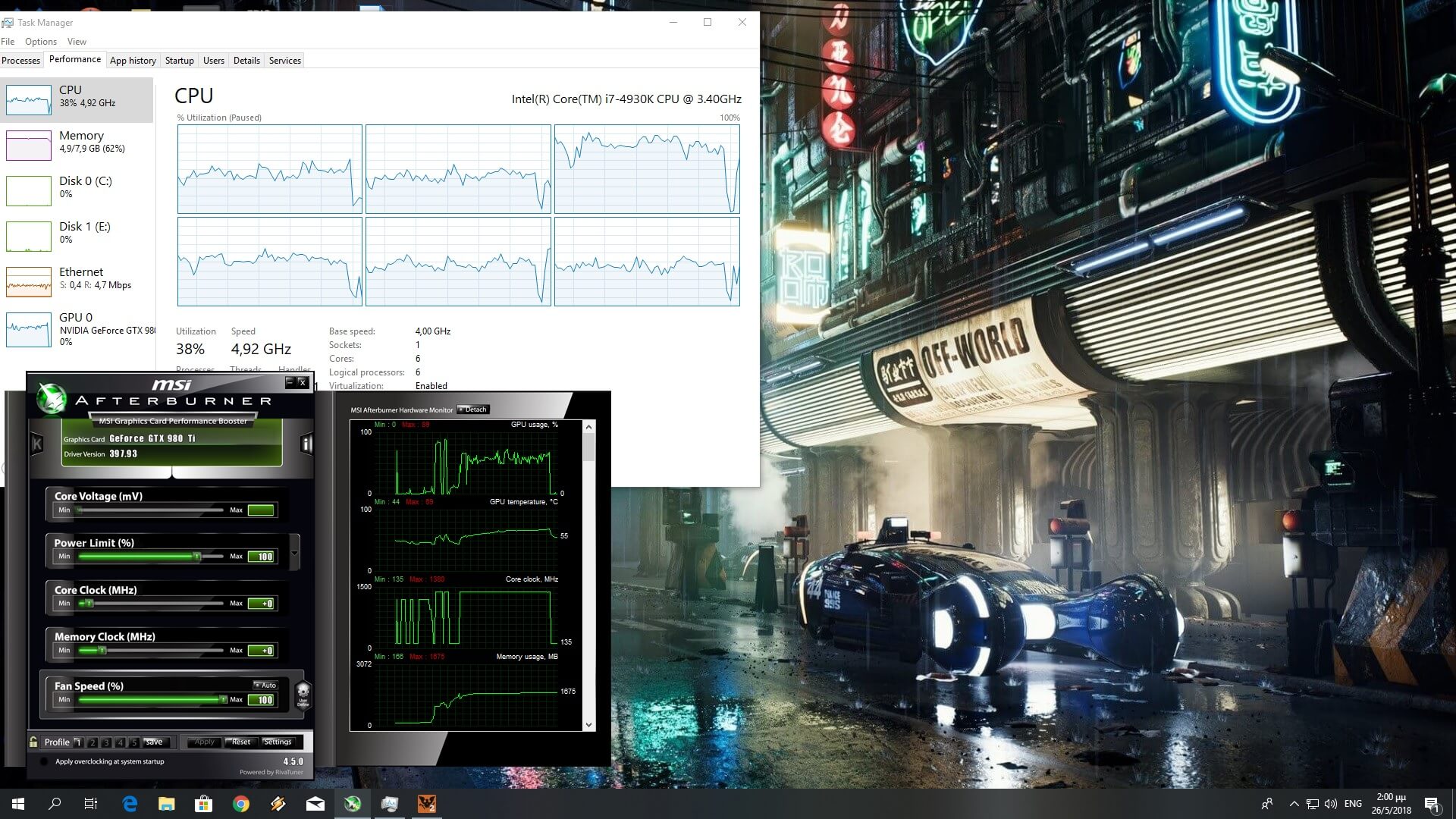 Undead Labs has included a few graphics settings to tweak. PC gamers can adjust the quality of anti-aliasing, foliage draw distance, world level of detail, character level of detail, shadows, ambient occlusion, post process effects and sub-surface scattering. There are also options for VSync and Screen Space Reflections, and you can only use your desktop resolution when playing in fullscreen mode.

Now before continuing, I have to admit that I was a bit cautious about this PC release the moment Microsoft declined sending us a review code. For what it’s worth, we have received review codes for all previous Microsoft games so yeah, something seemed off. And although State of Decay 2 can run with constant 60fps on a variety of PC systems, it does suffer from optimization issues on both NVIDIA and AMD GPUs.

Our AMD Raden RX Vega 64 was under-used at both 1080p and 1440p, even though none of our CPU cores was maxed out. On the other hand, our NVIDIA GTX980Ti was locking at 60fps even when VSync was disabled at both 1080p and 1440p. NVIDIA and AMD will have to work with Undead Labs to further optimize their drivers as these GPUs have major issues running the game at higher framerates than 60fps. Still, we strongly believe that 60fps is more than enough for this particular title so we suggest locking the framerate at 60fps until AMD and NVIDIA resolve these driver issues. 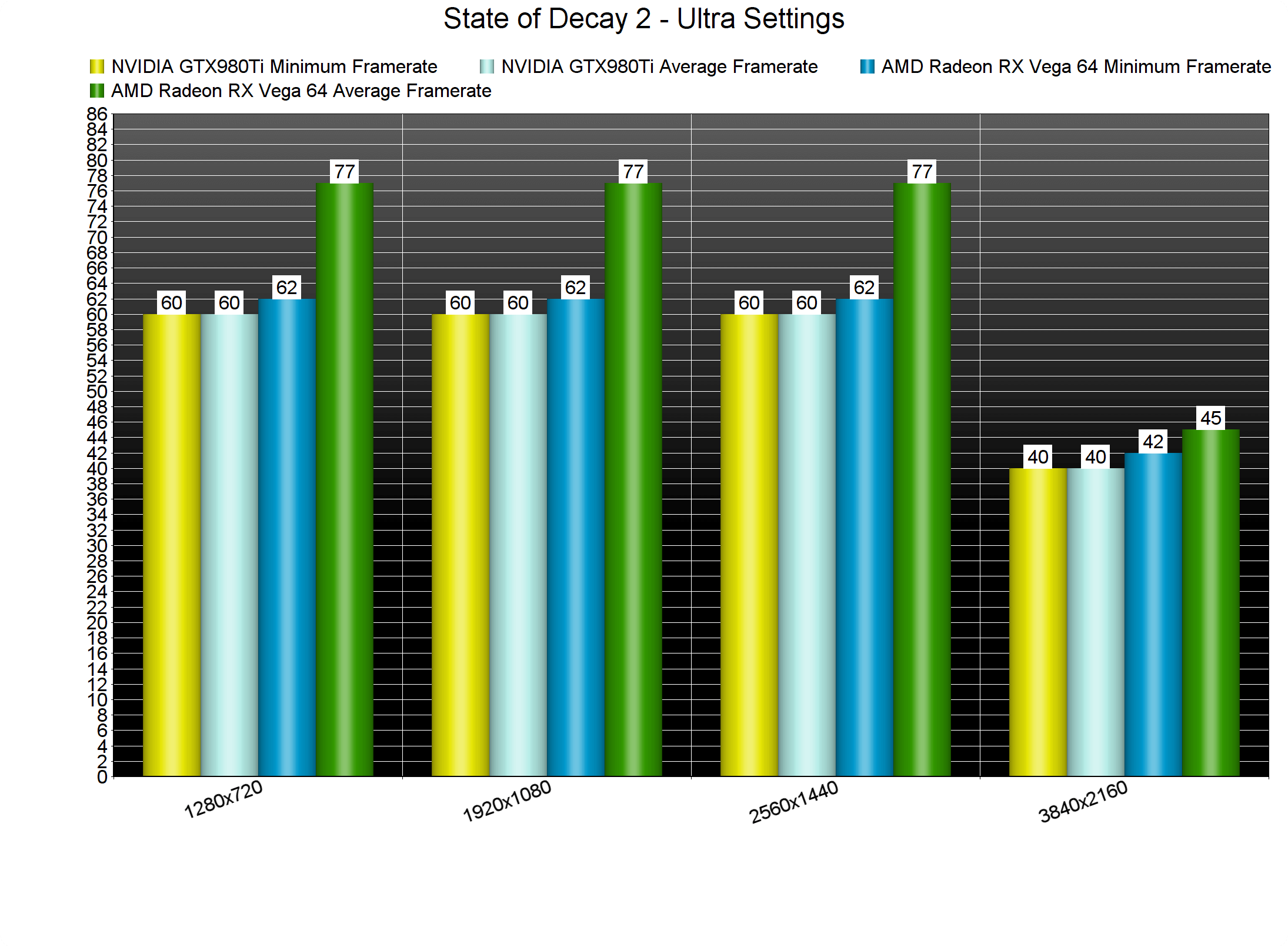 Our NVIDIA GTX690 – which behaved similarly to a GTX680 due to the lack of an SLI profile – ran the game with a minimum of 31fps and an average of 35fps on Ultra settings at 1080, and our AMD Radeon RX580 was almost able to offer a constant 60fps experience. It’s also worth noting that even though the game is exclusive to Windows 10 (at least for now) it uses the DX11 API instead of the DX12 API. 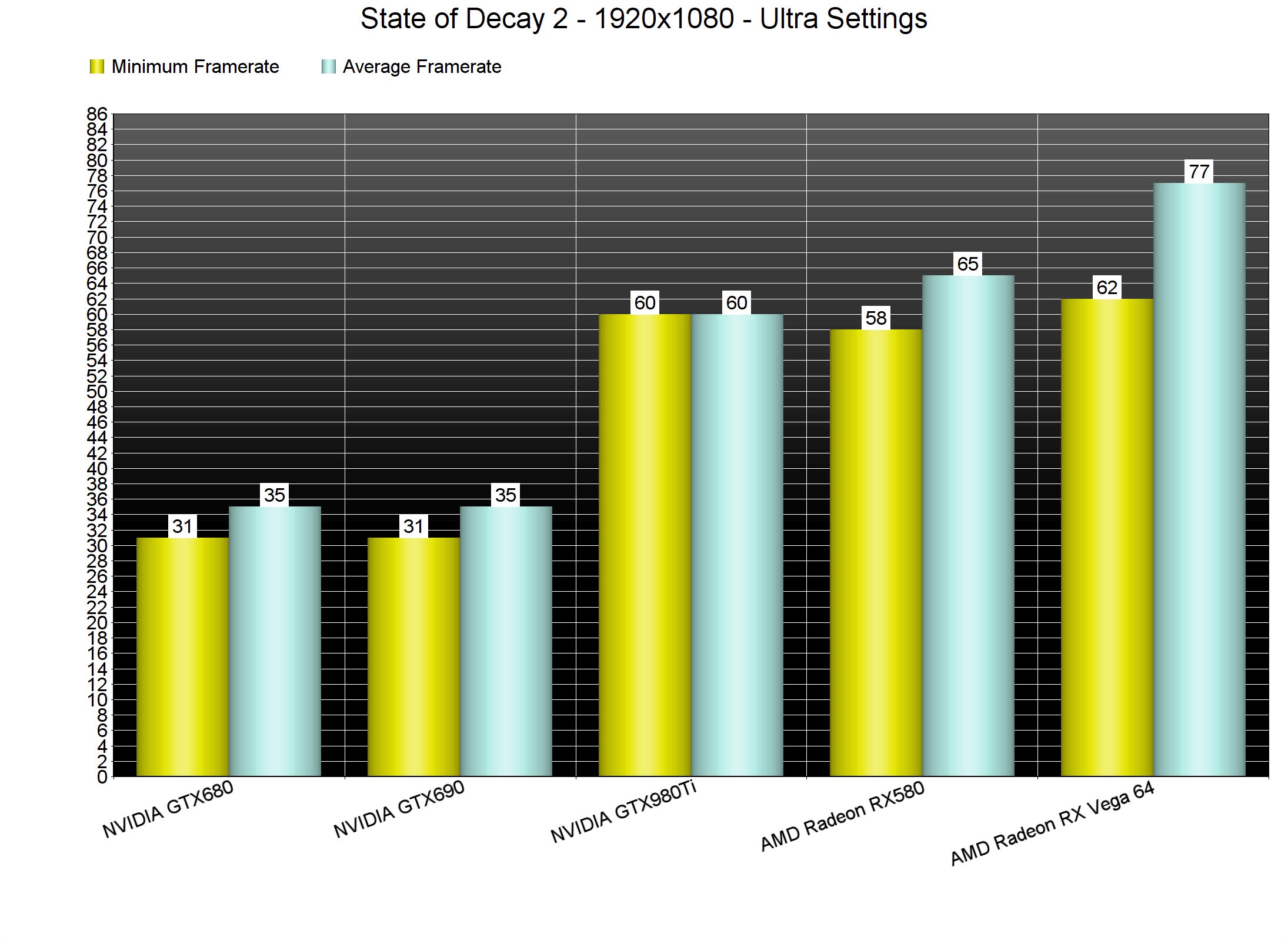 In order to find out how the game performs on a variety of CPUs, we simulated a dual-core and a quad-core CPU. State of Decay 2 does not require a high-end CPU in order to be enjoyed. Without Hyper Threading, our simulate dual-core simulated system was able to push a minimum of 52fps and an average of 58fps, however, there were noticeable frame pacing issues. The frame pacing issues disappeared the moment we enabled Hyper Threading, and overall performance was similar to our six-core and simulated quad-core systems. 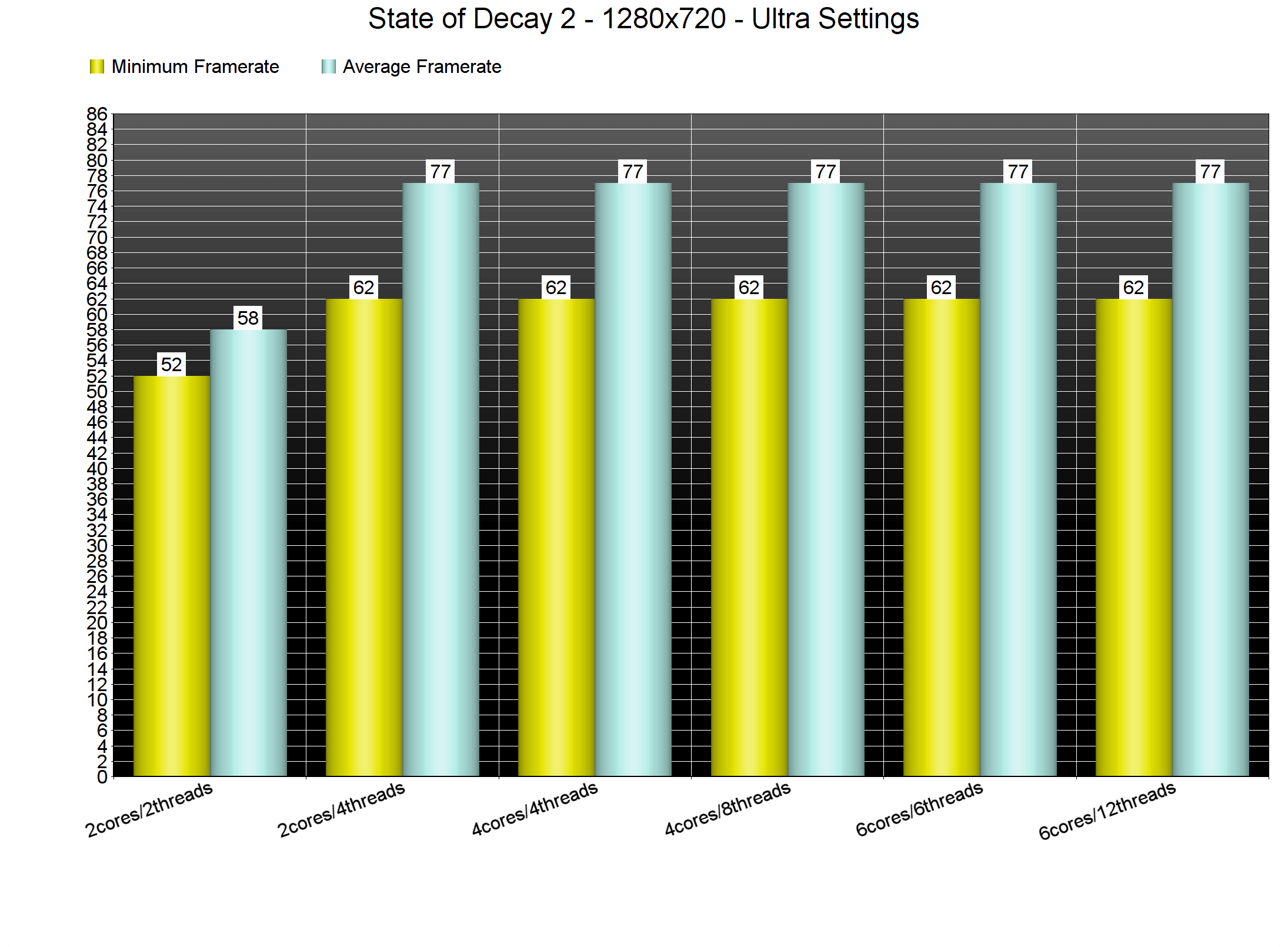 Graphics wise, State of Decay 2 does offer anything mind-blowing. There are pop-in issues even on Ultra settings, and shadows do not look that great. The lighting looks good but it’s not particularly amazing or advanced as the one found in other titles, environmental interactivity is limited, you can’t bend bushes or grass, and lip-syncing is average. We also noticed some inconsistent textures. For example, and as you can see below, the textures for the smaller/normal-sized rocks are blurry but the ones for the big rocks are detailed. The feeling I got from State of Decay 2 was that it felt more like a cross-gen game than one that was created for current-gen systems. 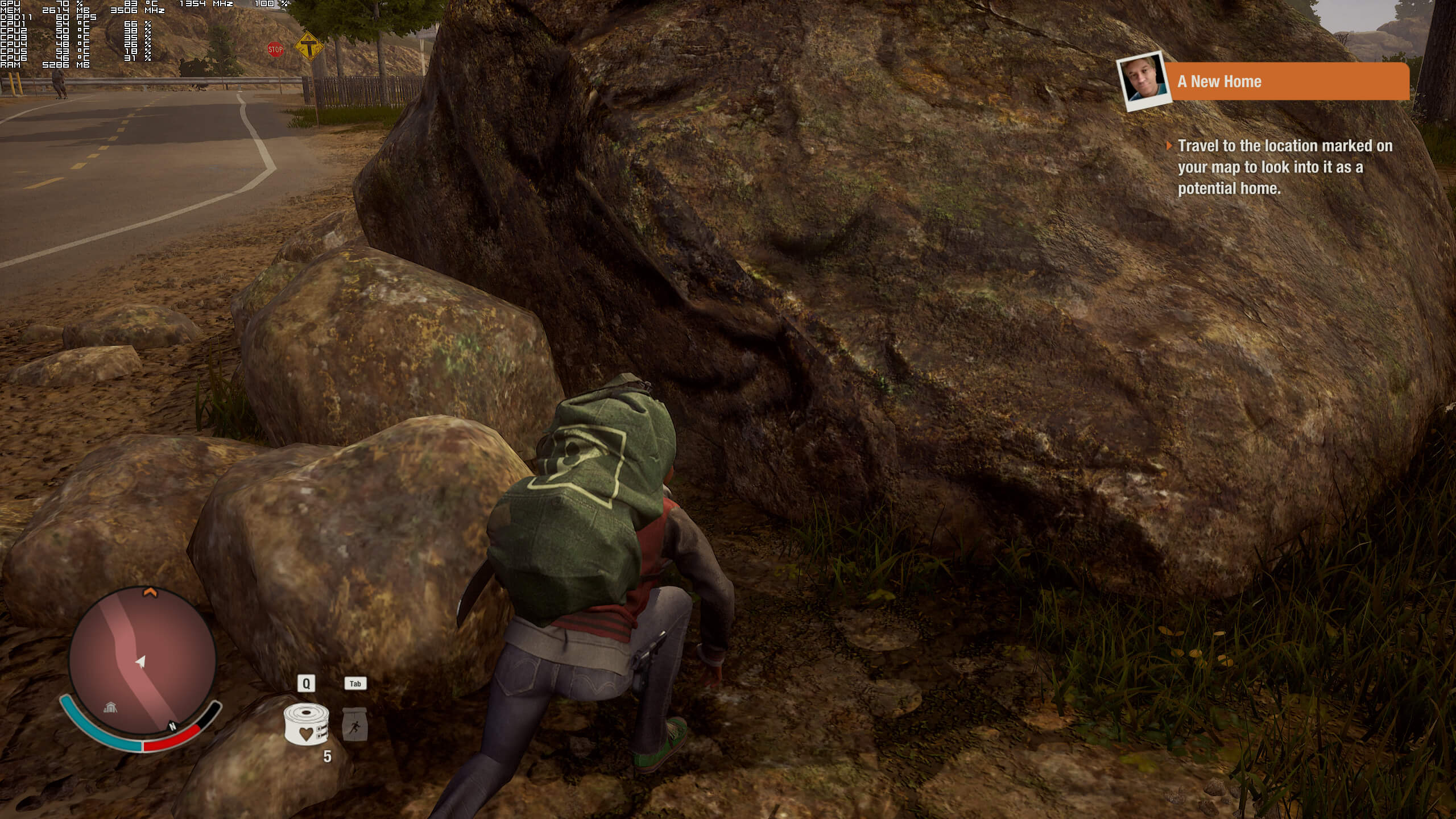 All in all, State of Decay 2 can run with 60fps on a variety of PC configurations. However, those seeking higher framerates will encounter a number of issues on both NVIDIA’s and AMD’s hardware. Since there are issues on both vendors, we can safely say that the PC version was not ready for release yet. Moreover, we also experienced some random mouse issues (random erratic slow movements that could be resolved by alt-tabbing), though we are happy to report that there aren’t any mouse acceleration issues and that there are proper on-screen m+k indicators. Still, and despite its issues, State of Decay 2 can run with constant 60fps on moderate hardware. 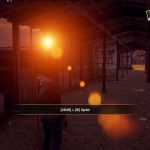 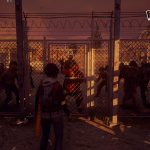 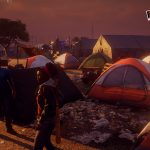 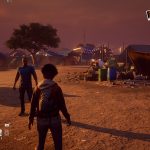 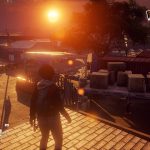 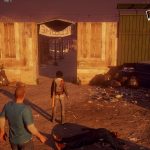 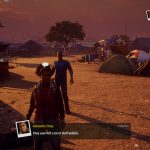 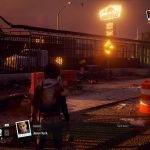 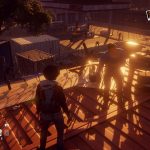 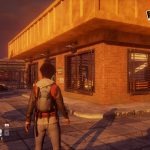 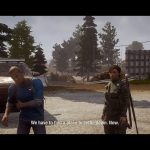 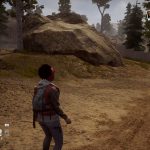 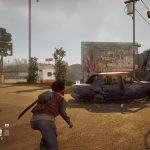