Monster Hunter World is a game that a lot of PC gamers were looking forward to. While the game came out in January 2018 on consoles, it took almost six months until we see it on PC. Capcom claimed that it needed some extra time in order to offer an optimized product so here we are today with the PC version currently available. As such, it’s time to benchmark it and see how it performs on the PC platform.

For this PC Performance Analysis, we used an Intel i7 4930K (overclocked at 4.2Ghz) with 8GB RAM, AMD’s Radeon RX580 and RX Vega 64, and NVIDIA’s GTX980Ti, Windows 10 64-bit and the latest version of the GeForce and Catalyst drivers. We didn’t use the GTX690 as this is a really demanding game and there isn’t currently any SLI profile for it. 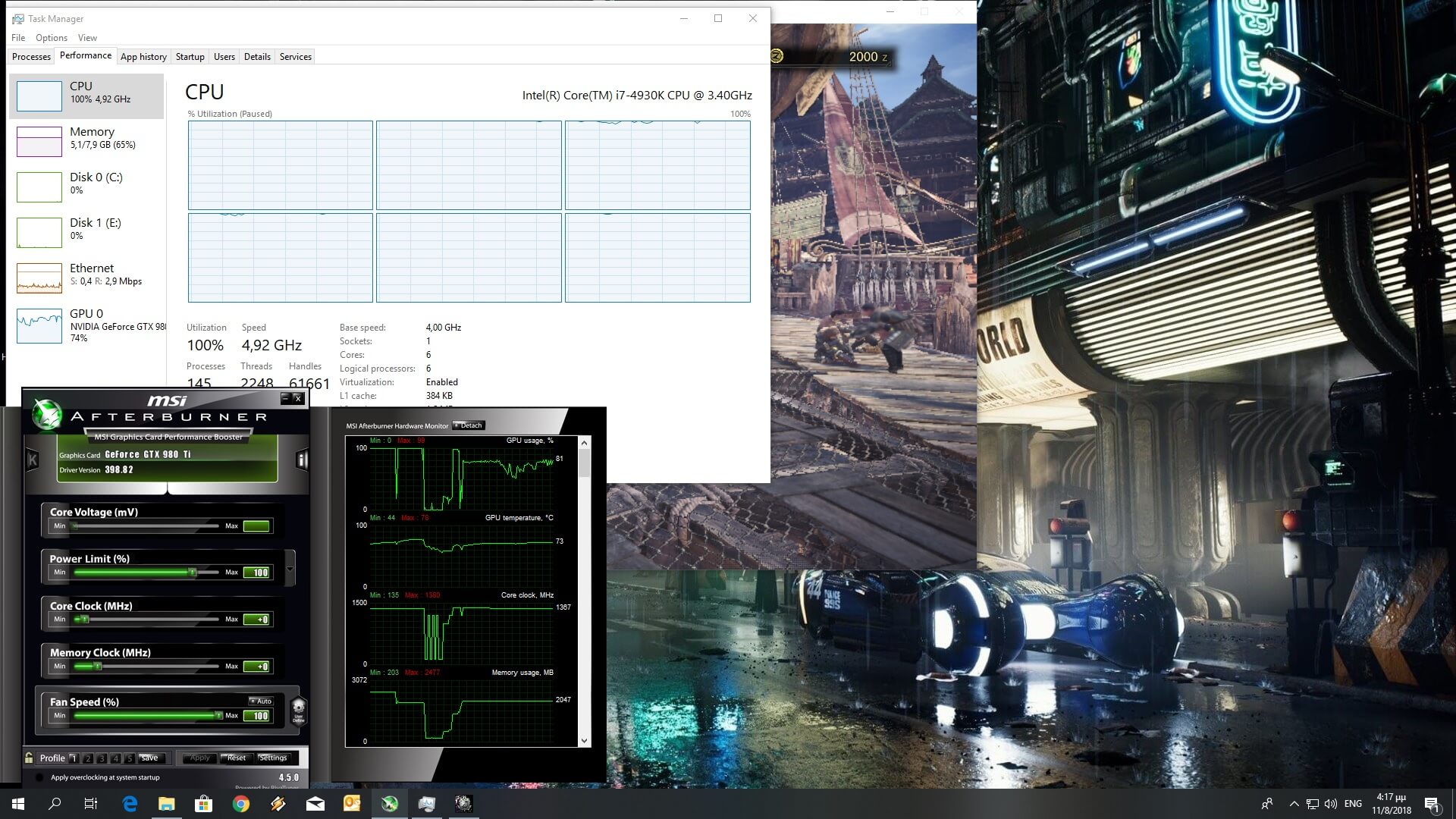 Capcom has added a respectful number of graphics settings. PC gamers can adjust the quality of textures, ambient occlusion, volume rendering, shadows, anti-aliasing, LOD bias, Max LOD level, anisotropic filtering, SH diffuse, dynamic range and they can enable/disable foliage sway, subsurface scattering, screen space reflections, water reflections and Z-prepass. There are also options for resolution scaling and framerate. Do note that in order to get a native resolution, you’ll have to use the “High” resolution scaling setting. 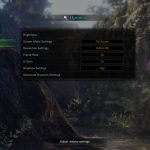 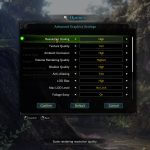 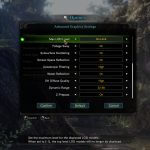 In order to find out how the game performs on a variety of CPUs, we simulated a dual-core and a quad-core CPU. For our CPU tests we used the hub area of the game that features a lot of NPCs. We also dropped our resolution to 720p and the resolution scaling to Low (but kept the Highest settings) so we could eliminate any possible GPU bottleneck. 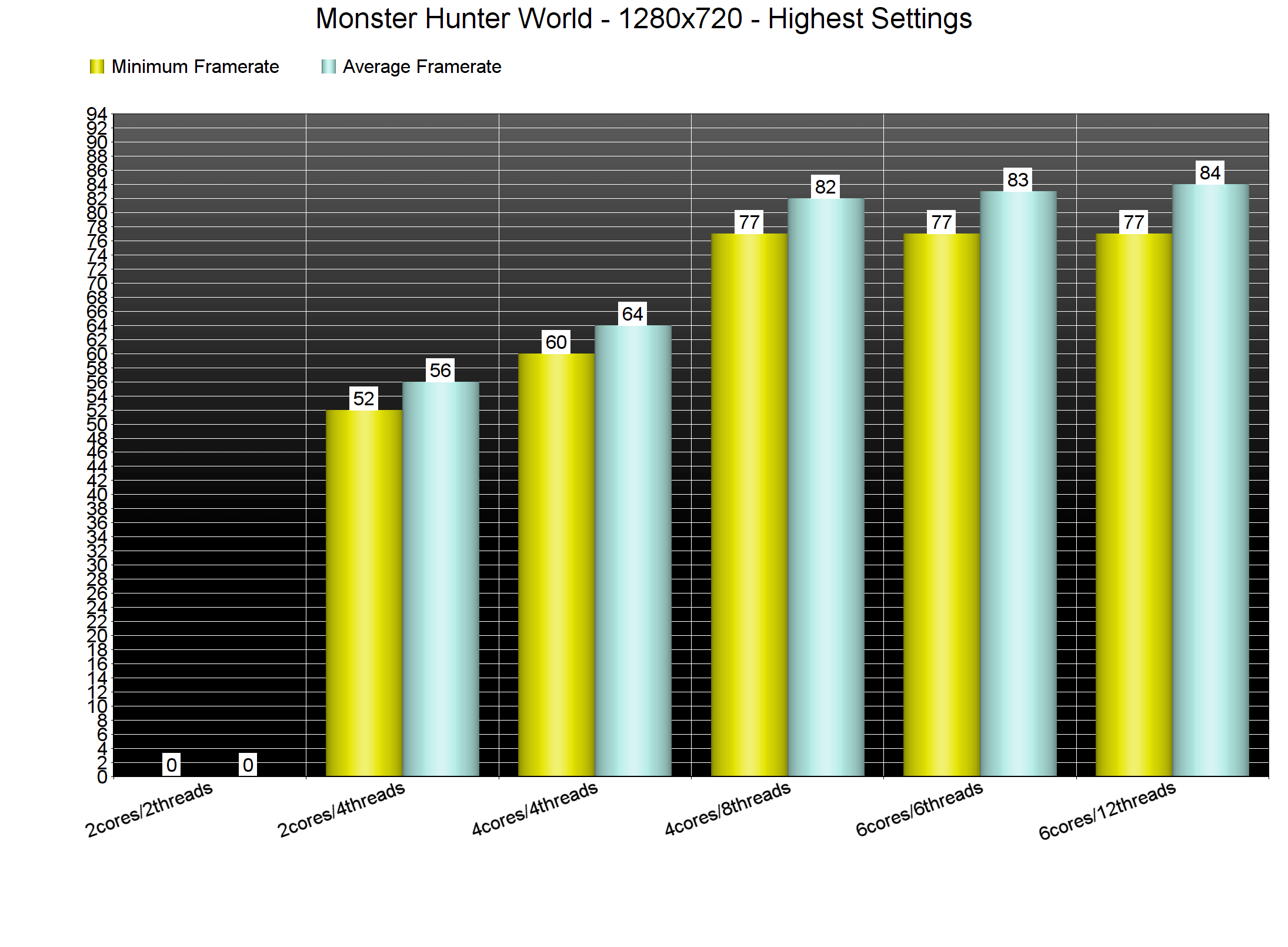 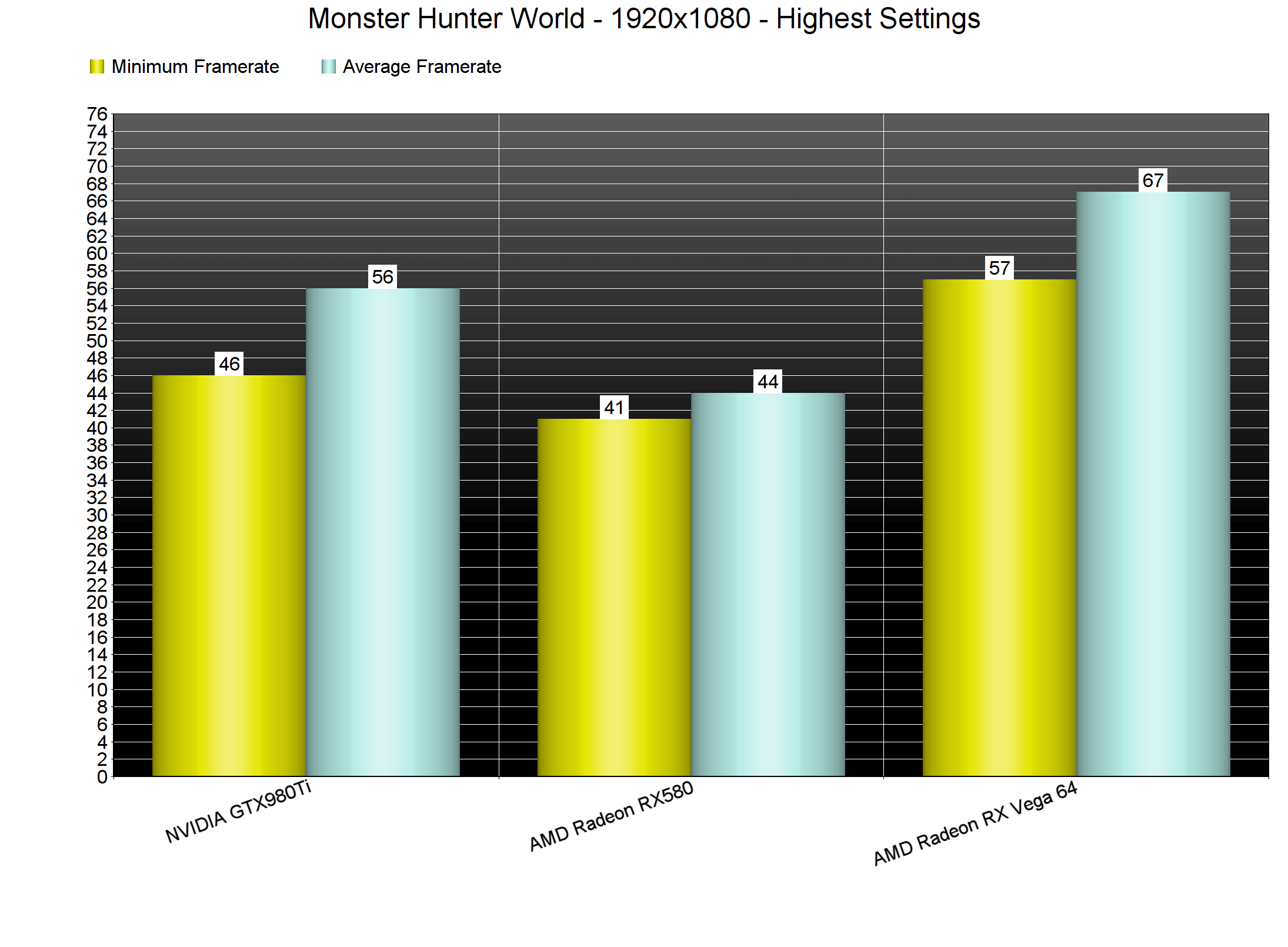 In order to get a 60fps experience on our GTX980Ti, we had to lower some settings (or use the High preset). On High settings and at 1080p, we were able to get a minimum of 75fps and an average of 80fps. By lowering even further our settings, we were able to hit a bit higher framerates, though it’s worth noting that on both 720p+Highest settings and 1080p+Low settings our GTX980Ti was running the game better than the Radeon RX Vega 64. This is due to NVIDIA’s better optimized drivers (we’ve said numerous times that AMD’s drivers have a huge CPU overhead in DX11 and this is evident here too). 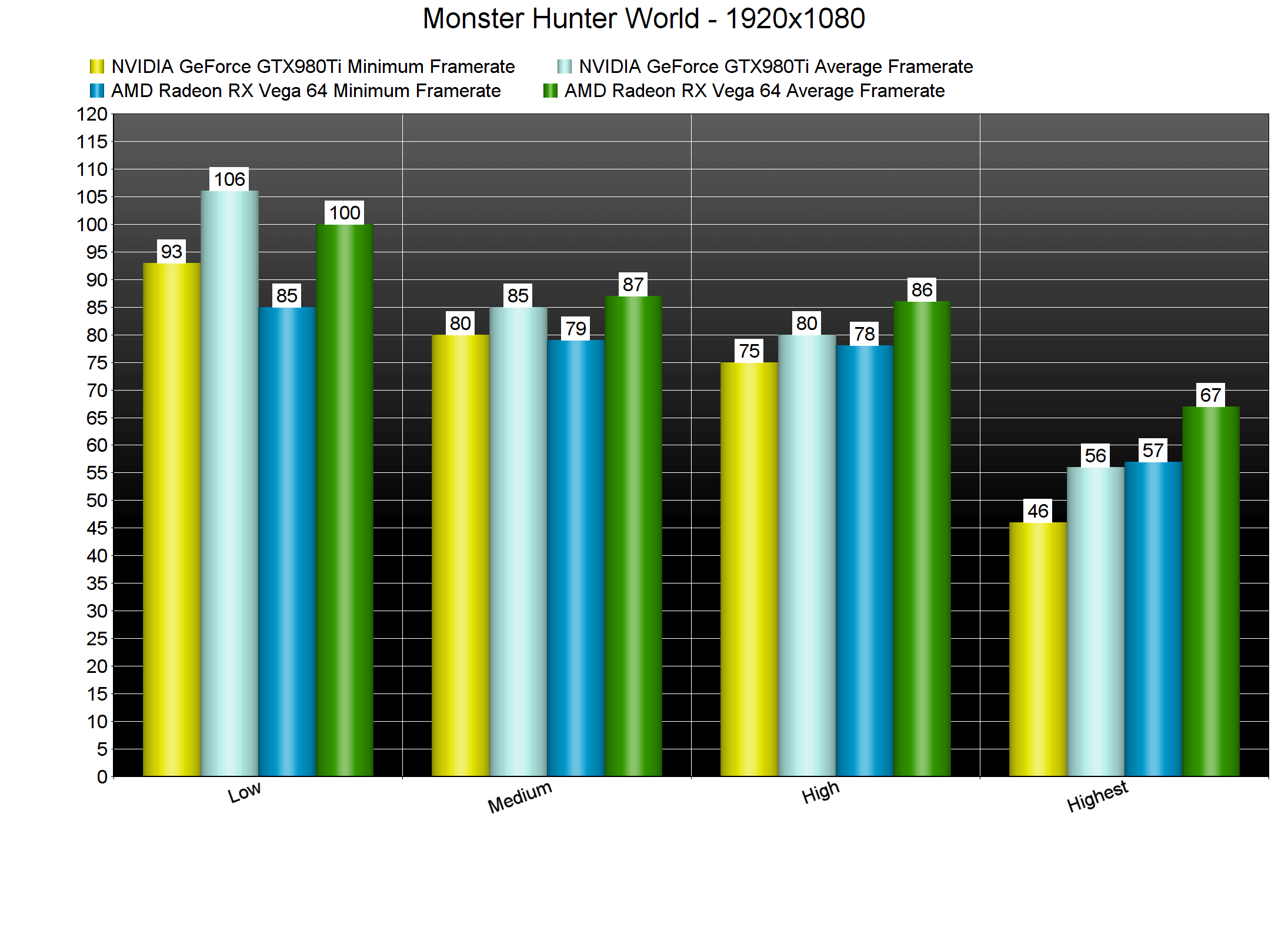 But what about higher resolutions? Well, our GTX980Ti was able to offer a console experience on 1440p and Highest settings whereas the AMD Radeon RX Vega 64 was able to beat NVIDIA’s GPU by around 15fps. In 4K, the performance difference was lower (around 5fps). Suffice to say that PC gamers will have to lower their settings in order to achieve a somehow smooth experience at anything higher than 1080p (unless of course they have NVIDIA’s latest GPU, the GTX1080Ti). 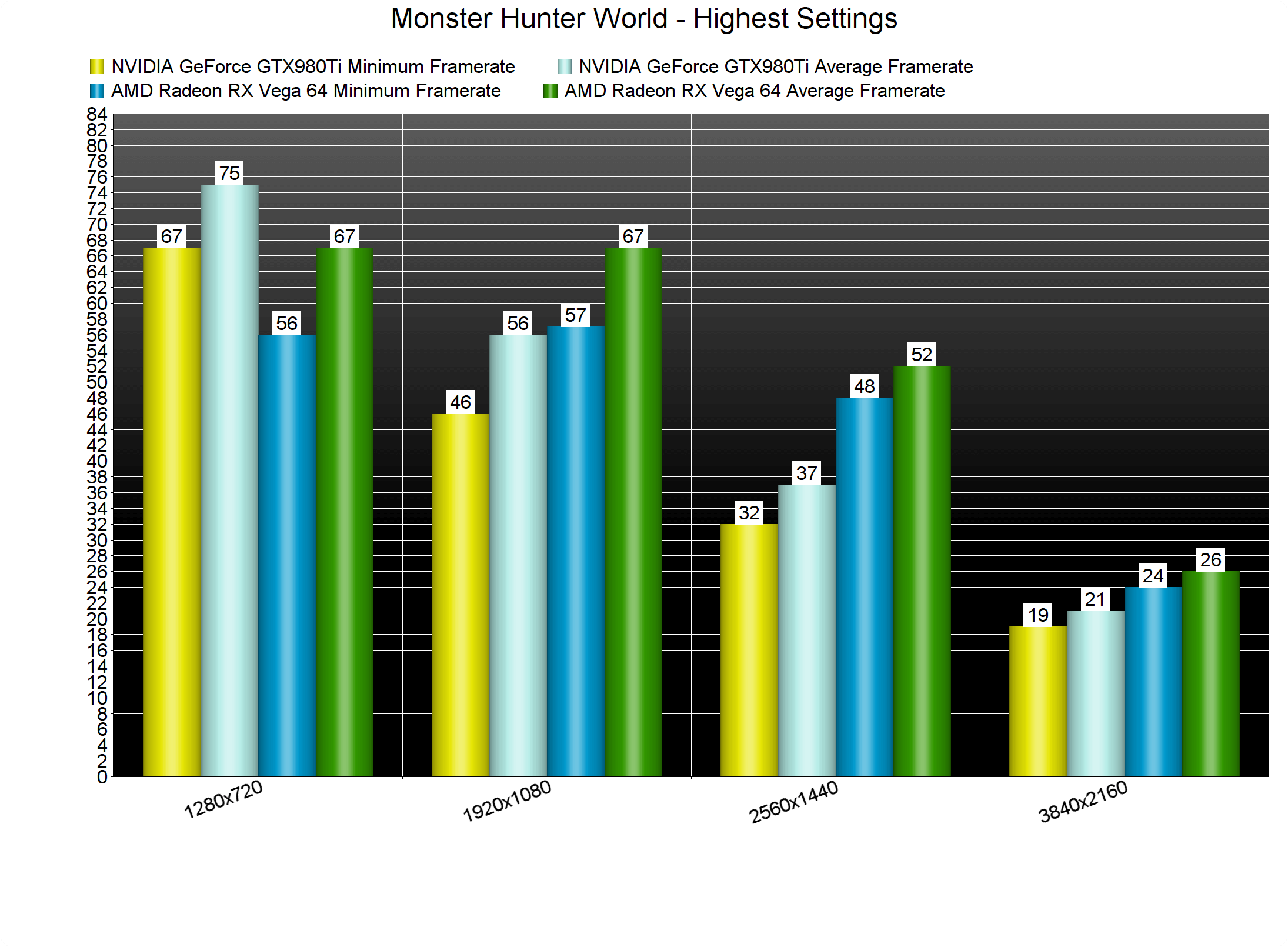 What’s also worth noting is that the visual differences between the High and the Highest settings is minimal. As such, we strongly suggest using a mixture of High and Highest settings in order to achieve a smooth experience as some settings are really demanding on their highest values (without offering major visual improvements).

Graphics wise, we weren’t really impressed by what Monster Hunter World displays. It looks fine for the most part but most of the textures feel low-res (even when using the highest texture setting). Volume Rendering brings a really annoying blur effect (and to be honest we believe the game looks better without it), lip-syncing is mediocre and everything feels a bit dated. To put it simply, Monster Hunter World performs worse than Assassin’s Creed Origins and looks way way worse than it. And that is a bit disappointing.

All in all, the PC version of Monster Hunter World is not as optimized as we’d hoped, especially if we take into account the fact that Capcom decided to delay it almost half a year. The game requires a really powerful GPU, though the good news is that gamers can lower the settings in order to improve performance. Still, the visuals that are being displayed on screen do not really justify – at least in our opinion – these high GPU requirements. Moreover, the game suffers from mouse smoothing issues and the default key bindings can be a bit problematic (thankfully the game allows to re-bind all keys).