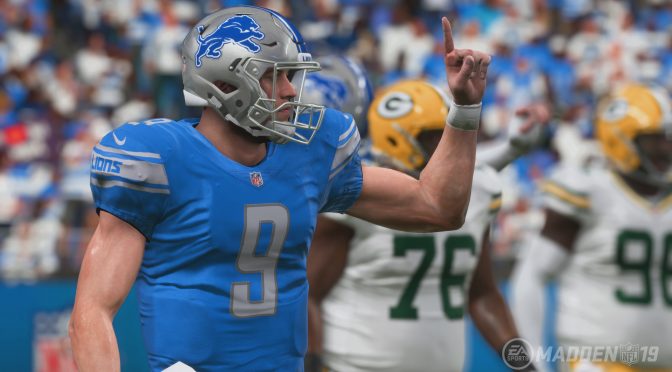 Back in May, EA Play’s official website revealed that the latest part in the Madden NFL series would be coming to the PC. This came literally out of nowhere as EA Sports had previously announced the game only for consoles. However, and thanks to the Frostbite 3 Engine, Madden NFL 19 is now available on the PC so it’s time to benchmark it and see how it performs on the PC platform. 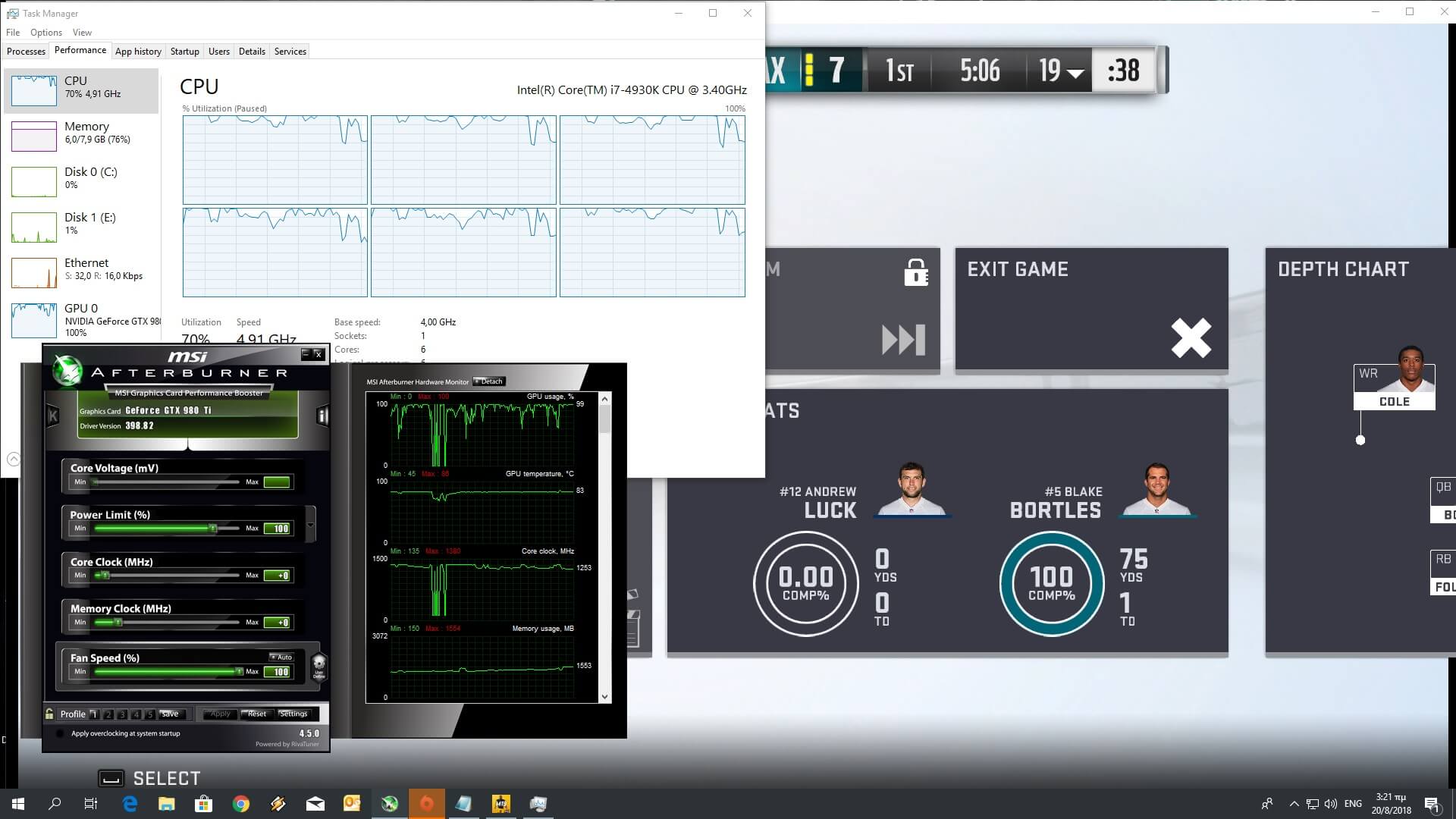 Madden NFL 19 comes with a respectable number of graphics settings to tweak. PC gamers can adjust the quality of Meshes, Shadows and Crowd, and there are options to enable or disable 3D Grass, Bloom, SSAO, Depth of Field, Lens Flares and High Resolution Circular DOF. There are also options for DirectX, Triple Buffering, VSync, Framerate (you can either leave it unlocked or lock it at 30fps or 60fps), Anti-Aliasing, and the game fully supports 4K resolutions from the get-go. 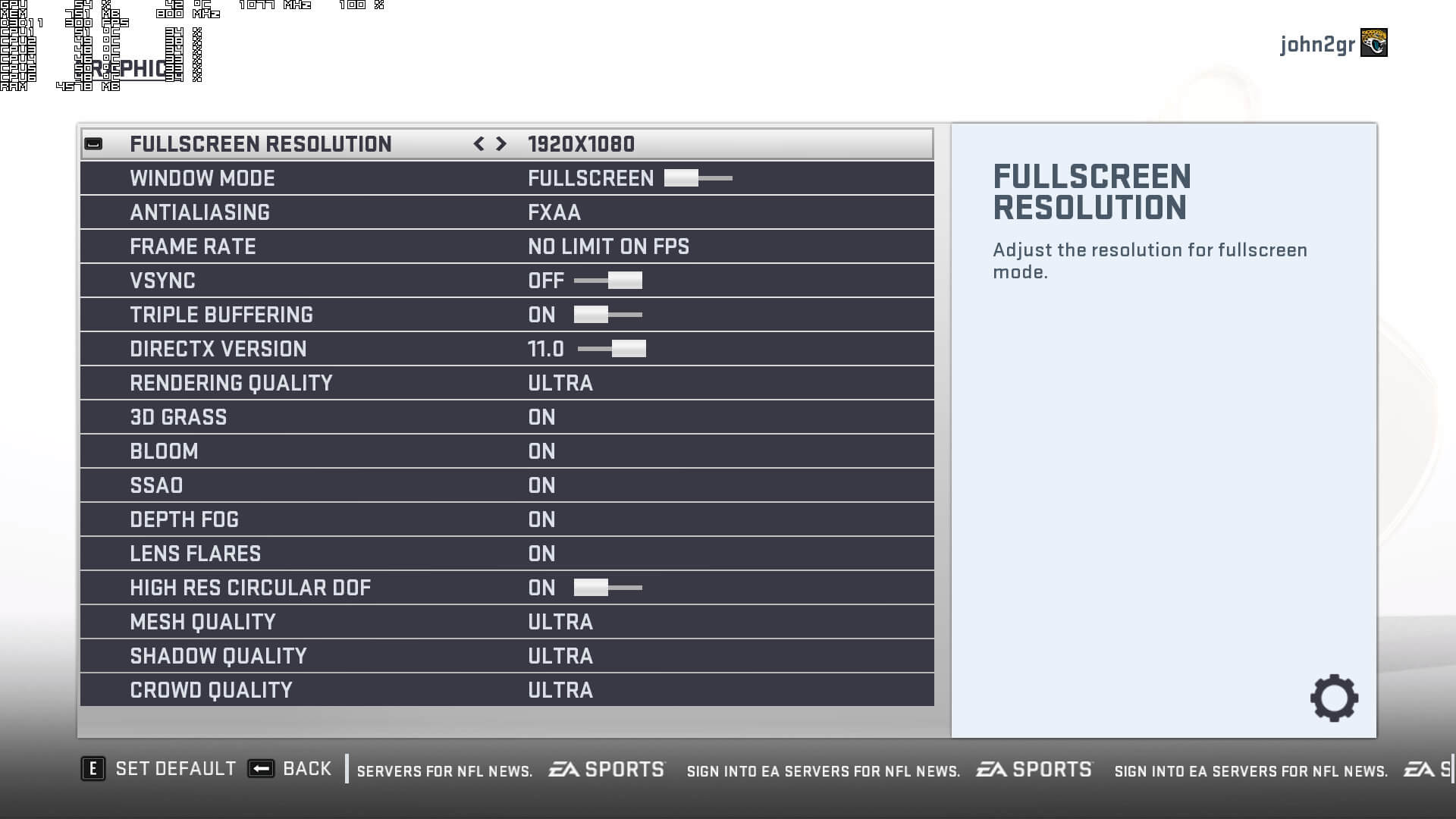 For both our CPU and GPU tests we played a full match at night and with rain. So in order to find out how the game performs on a variety of CPUs, we simulated a dual-core and a quad-core CPU. And to be honest, we were really surprised by the game’s CPU requirements. Our simulated dual-core system was unable to run the game due to severe stuttering (with or without Hyper Threading). On the other hand, our simulated quad-core system had some stuttering audio issues when Hyper Threading was disabled. When we enabled Hyper Threading, we saw a huge performance increase and the audio was working fine. As for our six-core CPU, it did not have any trouble running the game, though it was almost maxed out when Hyper Threading was disabled. Madden NFL 19 requires a fast CPU and appears to be taking advantage of six CPU cores/threads (though it does not benefit from anything higher than six CPU threads). 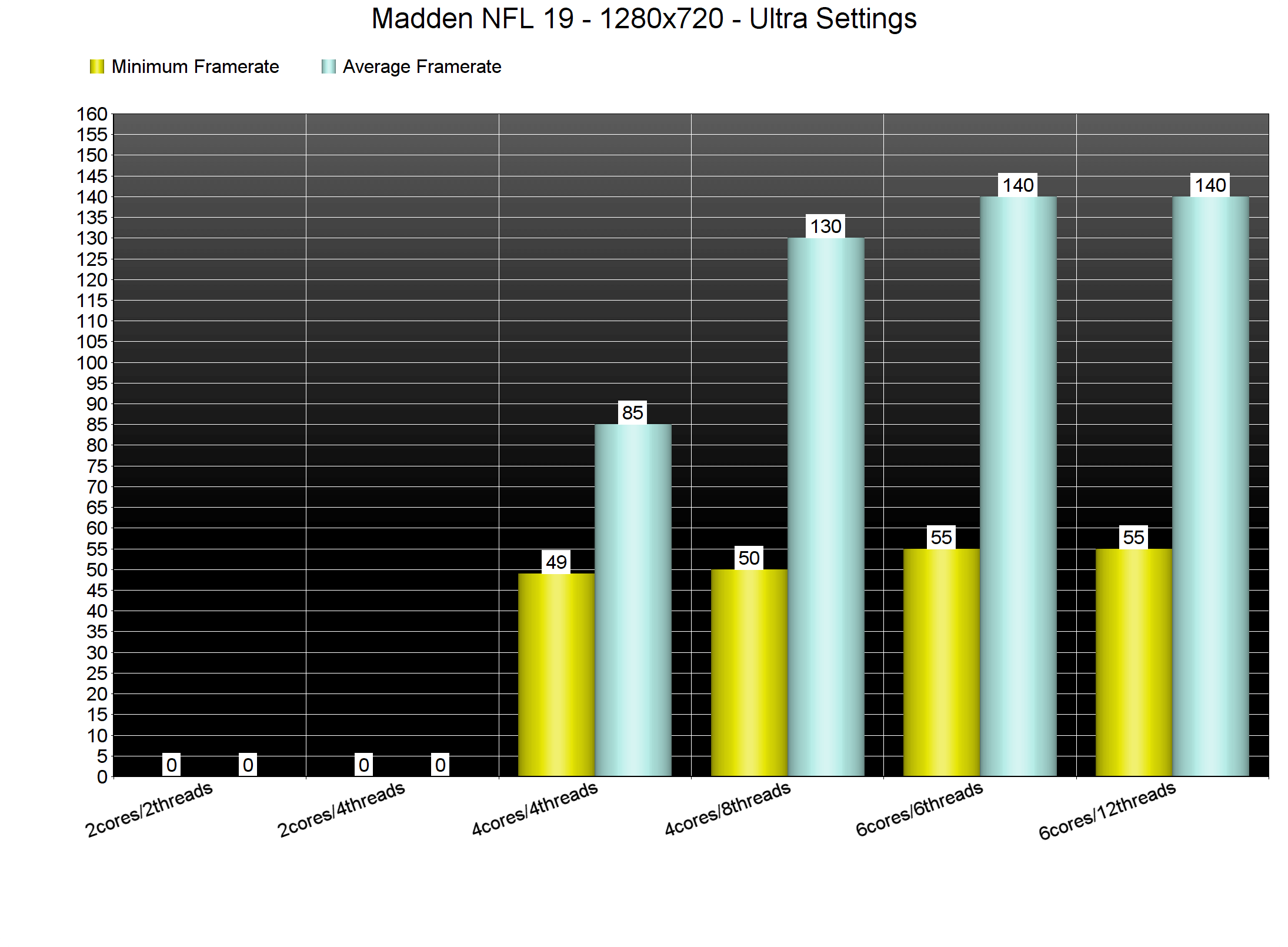 On the other hand, Madden NFL 19 does not require a really powerful GPU in order to be enjoyed.  Our NVIDIA GTX980Ti, AMD Radeon RX580 and RX Vega 64 had no trouble at all running the game at 1080p on Ultra settings and with MSAA 4X. 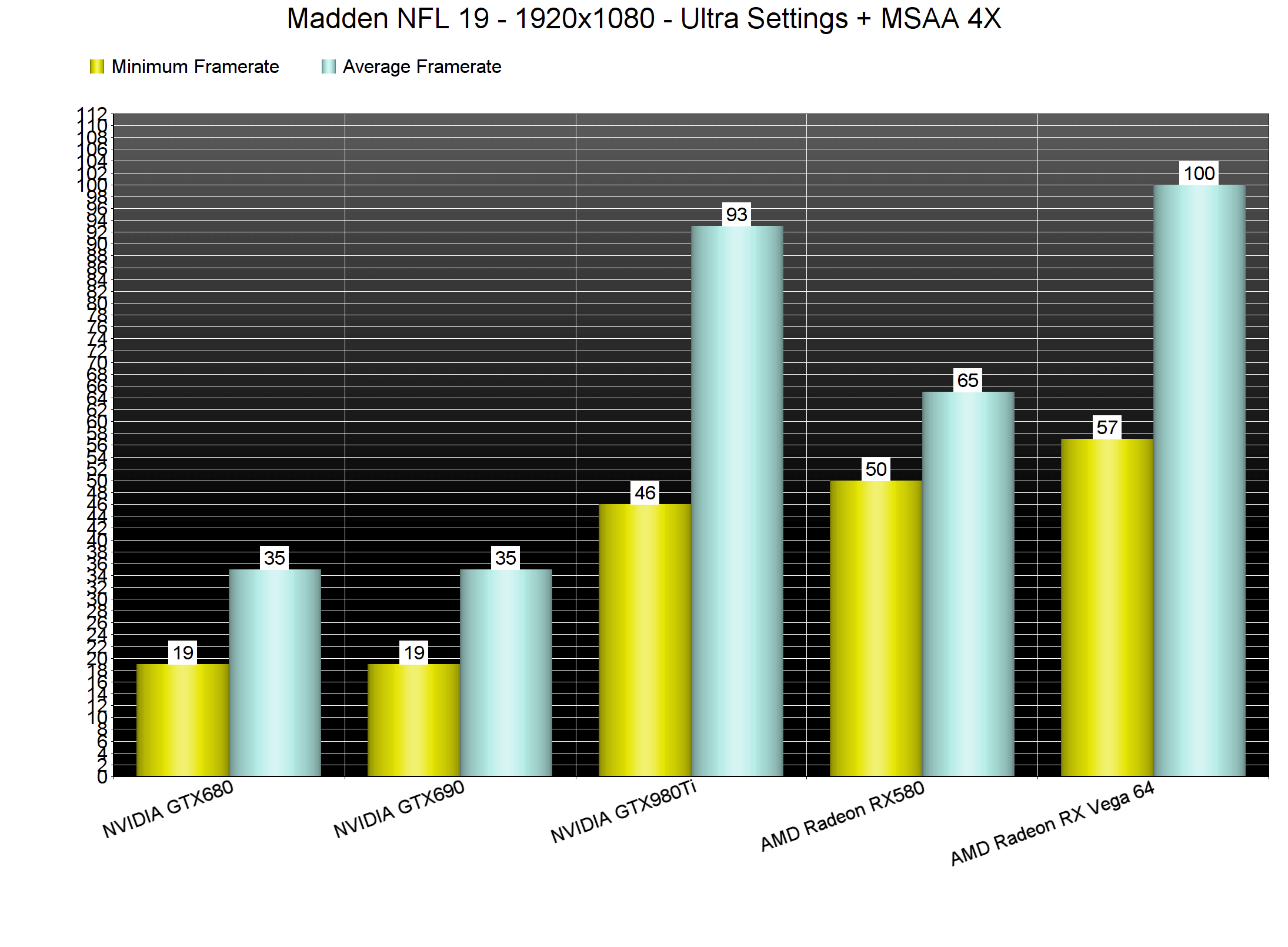 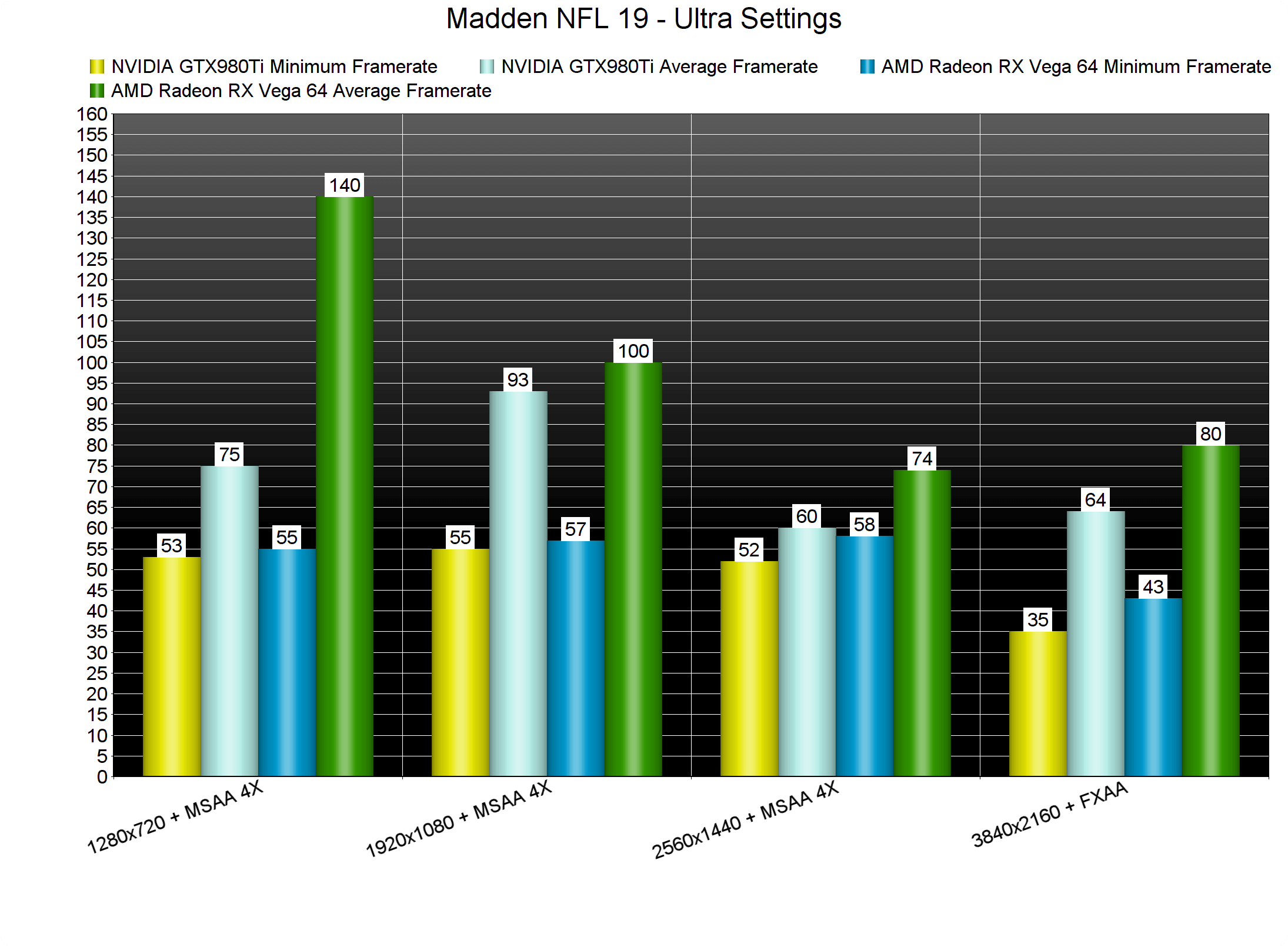 However, we did notice some really unoptimized scenes that affect both AMD’s and NVIDIA’s GPUs. During some cut-scenes, our framerate was dropping to really low numbers for no apparent reason. Below you can find two examples (as you can see, GPU usage was at 100% and yes in the second screenshot we were using a mere 720p resolution). Thankfully, while playing the game we did not encounter any performance issues so this is solely related to the game’s cut-scenes. Still, and with the exception of the intro stadium cut-scene that is as unoptimized as it can get, we used the game’s cut-scenes in our benchmarks.

Graphics wise, Madden NFL 19 looks gorgeous. The player models are incredible, there are some really high-resolution textures, the 3D grass is amazing, the lighting is great, the crowd is 3D and looks cool while playing the game. With the exception of the snow/rain effects, Madden NFL 19 looks as good – and in some cases better – as the CG trailers that EA Sports released a few years ago. Now that’s something truly amazing and to be honest, I can’t find anything to complain about. Perhaps some terrain deformation would be cool (and better rain effects) but other than that, Madden NFL 19 looks stunning.

Last but not least, we strongly suggest staying away from DirectX 12. While we noticed a 10fps boost on our AMD Radeon RX Vega 64, we experienced severe stutters (on both AMD’s and NVIDIA’s hardware). Like most Frostbite games, Madden NFL 19 plays better in DX11.

All in all, and after almost a decade, we finally got a pretty good PC port of Madden. Madden NFL 19 also supports mouse and keyboard, and it displays proper KB+M on-screen indicators. Naturally, we strongly suggest using a gamepad but if you want to play it with a keyboard+mouse, you can actually do it. The only real issue here are the unoptimized scenes during the in-game cut-scenes that need to be fixed. Apart from them, most PC gamers won’t have any trouble at all running and playing this latest sports game. 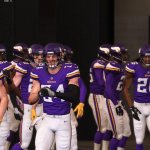 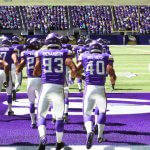 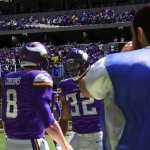 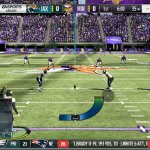 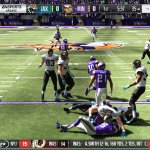 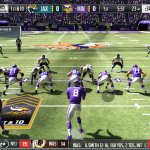 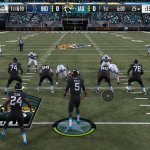 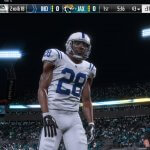 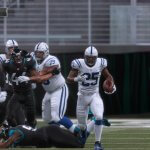