Yesterday, IO Interactive released the Ray Tracing patch for Hitman 3. This patch implemented ray-traced reflections and shadows, and added support for DLSS and AMD FSR 1.0. As such, we’ve decided to benchmark these new Ray Tracing effects.

Let’s start with some great news. DLSS is truly great in Hitman 3, and can match native resolution in terms of image quality. Not only that, but it can greatly boost overall performance. For instance, without Ray Tracing, the NVIDIA GeForce RTX3080 does not ever drop below 90fps in 4K/Ultra/DLSS Quality. 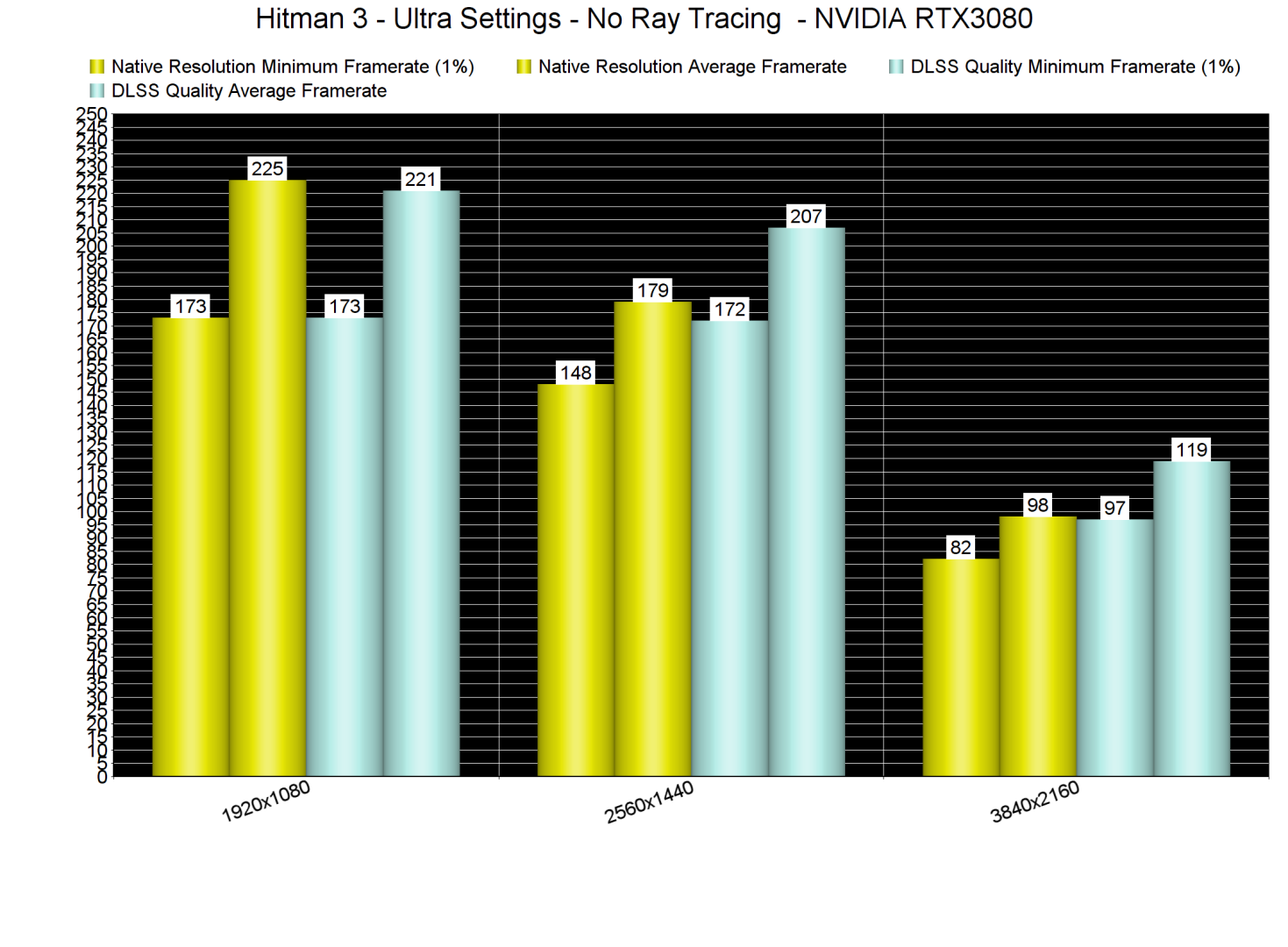 As said, Hitman 3 also supports AMD’s FSR tech. However, IO Interactive has only added support for FSR 1.0, which is inferior to DLSS. Thus, and until the team adds support for FSR 2.0, we do not recommend using it (especially if you are owners of an RTX GPU).

Now as we said in our previous article, we encountered a DLSS glitch/bug which resulted in really low performance. We were able to replicate this by enabling/disabling Ray Tracing (and without making any changes at all to DLSS). This issue appears randomly, so we don’t know what is really causing it. Still, and if you ever experience it, you can fix it by disabling and then re-enabling DLSS.

Hitman 3’s Ray Tracing effects are quite demanding. At 1080p and 1440p, an RTX3080 is able to provide a smooth gaming experience with DLSS Quality or Balanced. 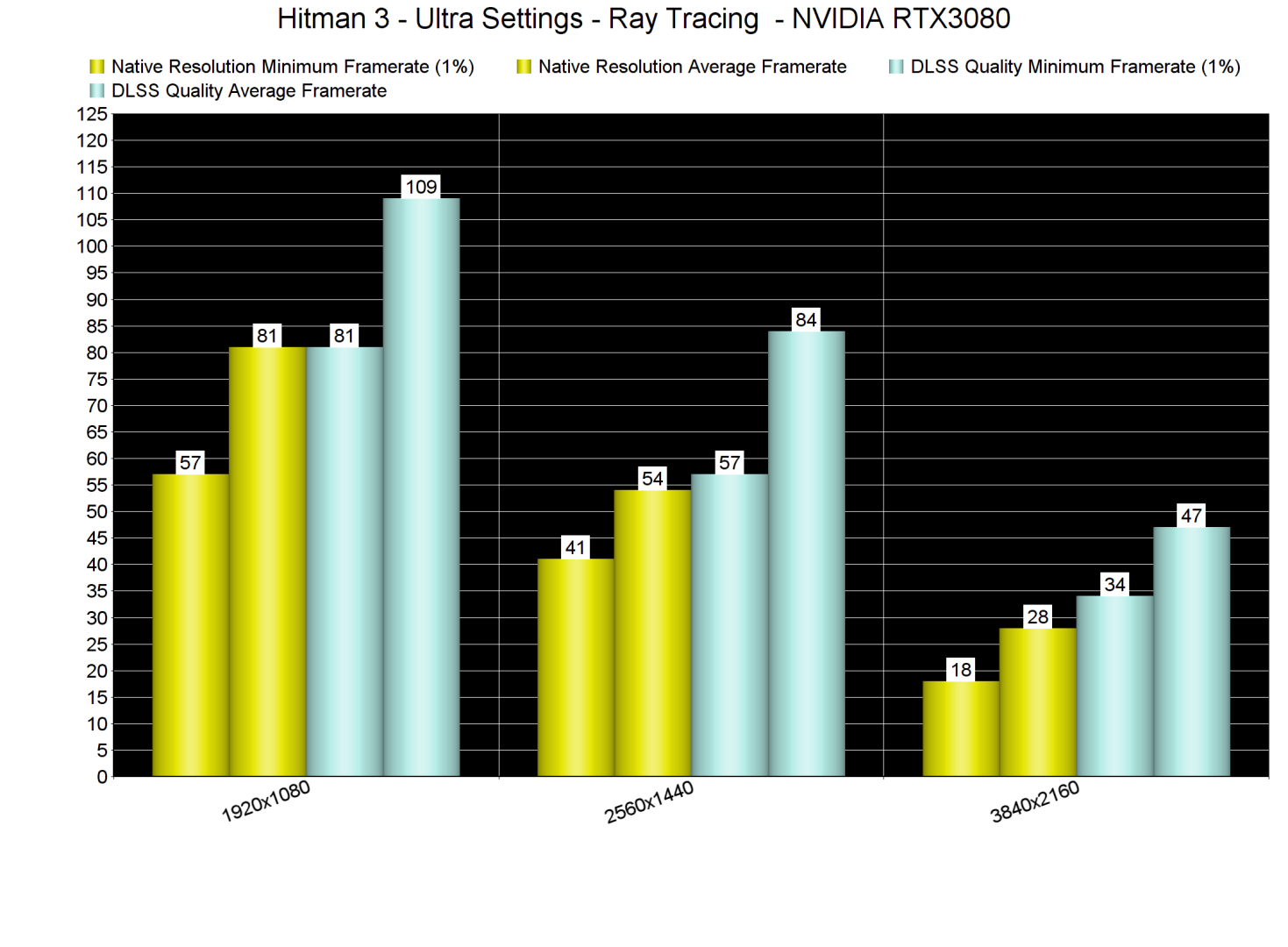 Below you can find some comparison screenshots between the ray-traced (left) and rasterized (right) versions of Hitman 3. At first glance, the ray-traced version appears better (thanks to the improved reflections). However, the performance hit is so big for such a small visual improvement. Not only that, but there are objects and light sources that use Screen-Space Reflections even when Ray Tracing Reflections are enabled.

Take for example the following scene. As we can clearly see, with Ray Tracing enabled, the pool does not reflect the light from the signs (on the right) unless you move the camera (so that they can appear on the screen). This is how screen-space reflections work.

What’s really ironic here though is that when you disable Ray Tracing, the pools do reflect the light from those signs (my guess is that these are cubemap reflections). You can clearly see that in the comparison below (“No Ray Tracing” is on the right). So, in this particular scene, the rasterized version looks better and runs significantly faster than the ray-traced version.

Given the huge performance hit that these RT reflections bring (and their visual issues), we really don’t see the point of enabling them. Yes, you are getting a bit more realistic reflections. However, most of you won’t be able to tell the difference (unless you compare them). In our opinion, the best way to play Hitman 3 right now is by enabling DLSS Quality and running it in 4K/Ultra with RT Sun Shadows. Our RTX3080 was able to push constant 75fps with these settings, and we highly recommend playing it this way!