Microsoft has just released the latest part in its Halo series, Halo Infinite. Powered by the Slipspace Engine, it’s time now to benchmark it and see how it performs on the PC platform. 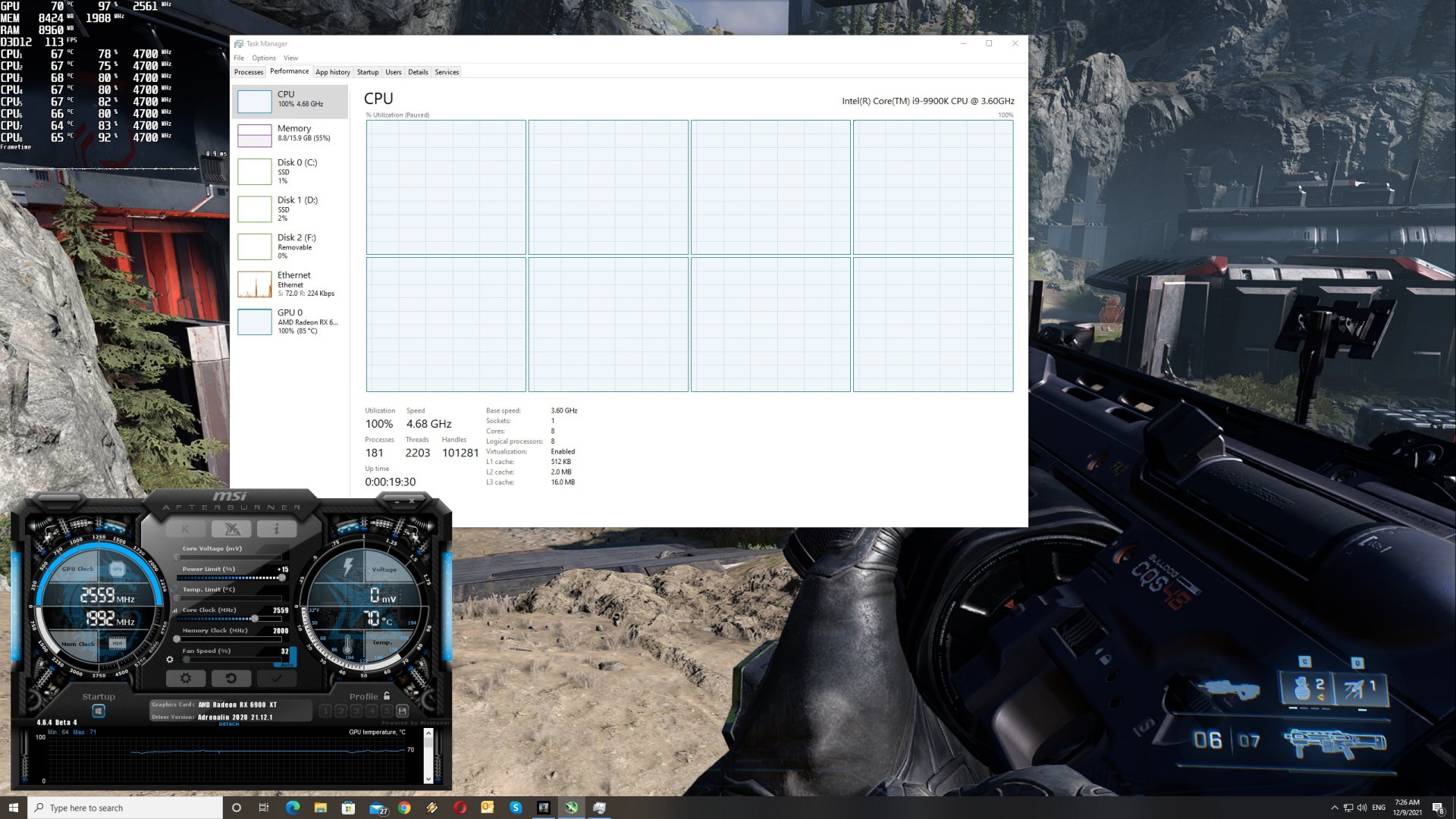 343 Industries has added a lot of graphics settings to tweak. PC gamers can adjust the quality of Textures, Geometry, Shadows, Ambient Occlusion, Reflections and more. The game also offers a FOV slider. And while it comes with a Resolution Scaling option, it does not support AMD’s FSR or NVIDIA’s DLSS. Now we should note that this is an AMD-sponsored game, so we don’t really expect 343 Industries to add support for DLSS.

Halo Infinite does not feature any built-in benchmark tool. As such, we’ve decided to benchmark the first open-world area you encounter. Contrary to the first two main missions, the open-world area appears to be more demanding on both CPU and GPU. Therefore, it can give you a better idea of how the game will run (especially in its later – and perhaps more demanding – areas).

In order to find out how the game scales on multiple CPU threads, we simulated a dual-core, a quad-core and a hexa-core CPU. Halo Infinite requires at least a modern-day quad-core CPU. Without Hyper-Threading, our simulated dual-core system was simply unable to offer a playable gaming experience due to severe stuttering issues. However, and even when we enabled Hyper-Threading, there were still some occasional stutters. 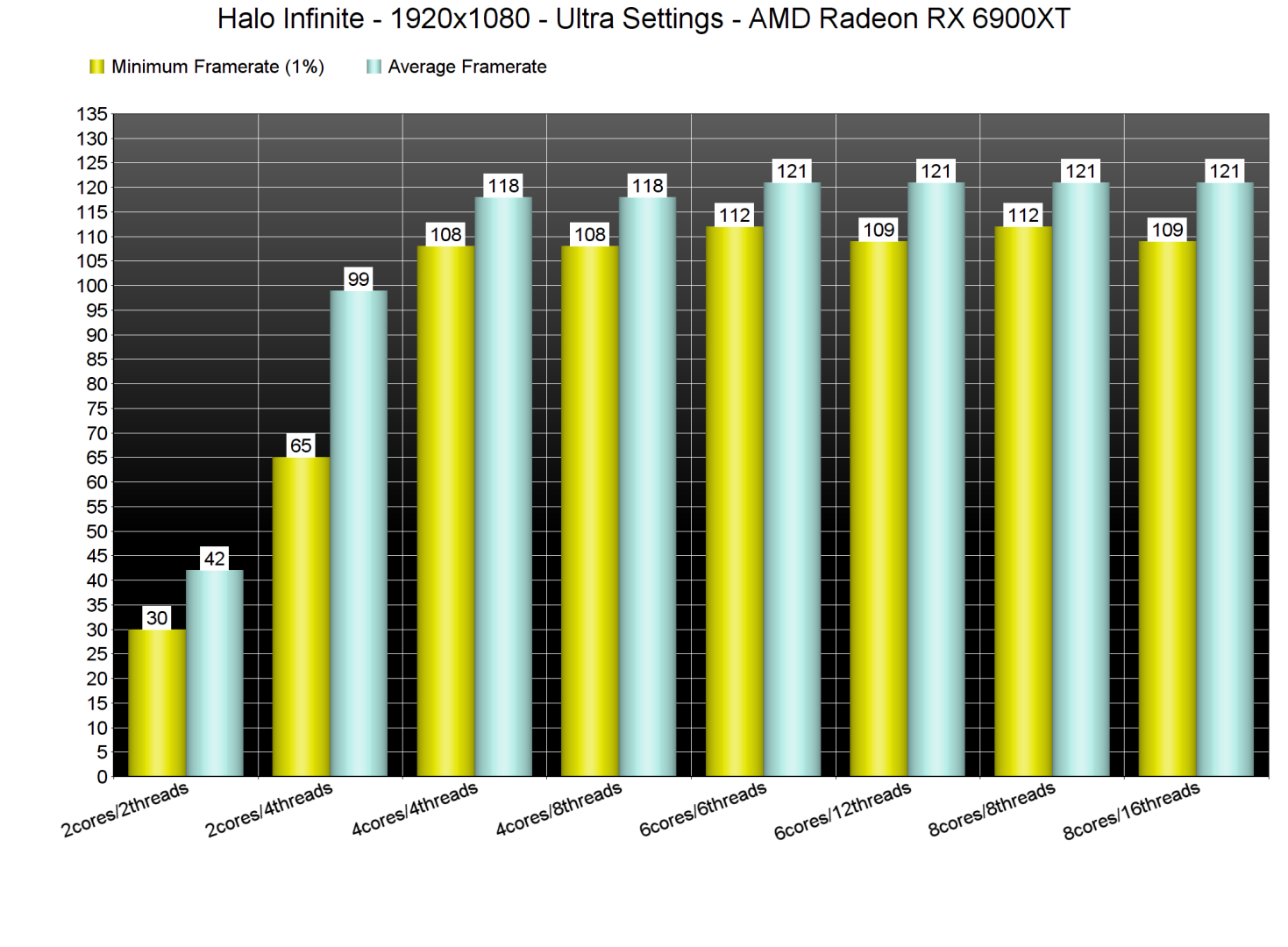 We should also note some really… bizarre CPU behaviour. As you can see in the first screenshot, the game appears to be using all eight cores of our Intel i9 9900K. However, when we simulated a hexa-core CPU, we did not experience any performance hit. Hell, even our quad-core system was close to the performance of our octa-core system. We don’t really know what is going on here and why the game is using all these threads when there isn’t any performance benefit at all. And yes, we didn’t have any other program running in the background.

While Halo Infinite does not seem to be demanding a high-end CPU, it certainly does require a powerful GPU. At 1080p/Ultra, the only GPUs that were able to run the game smoothly were the RTX2080Ti, RTX3080 and RX 6900XT. Performance on both the AMD Radeon RX 580 and the NVIDIA GTX980Ti was awful. Similarly, the game performed horribly on the AMD Vega 64 at Ultra settings. When we lowered our settings to Medium, we were able to get close to 60fps at 1080p on the Vega 64. However, the NVIDIA GTX980Ti could barely hit 50fps on Low settings. It seems that Halo Infinite was not optimized at all for older generation GPUs. 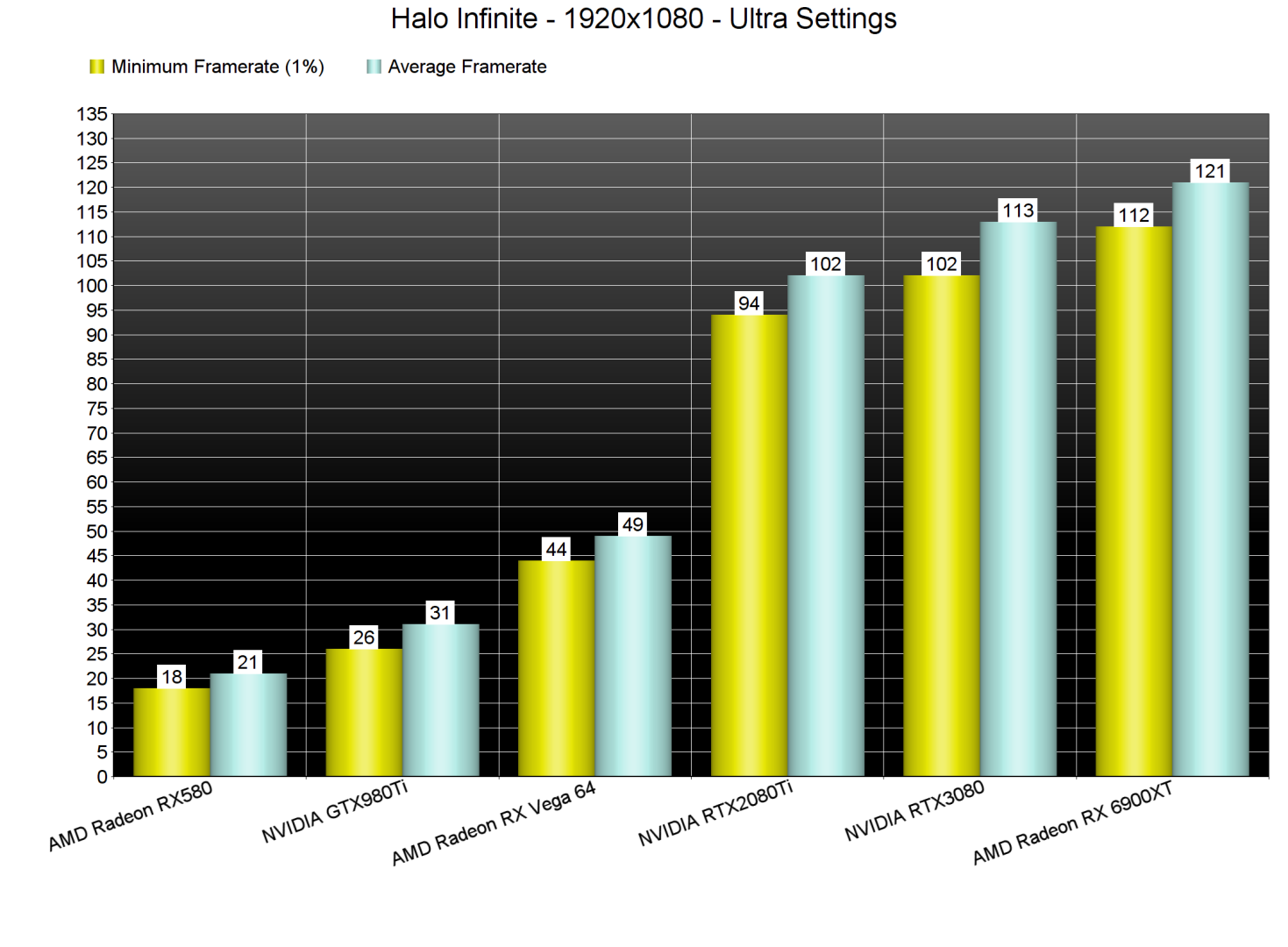 At 1440p/Ultra, the only GPUs that were able to run the game with constant 60fps were, once again, our top three GPUs. As for 4K/Ultra, the only GPU that was able to offer a constant 60fps experience was the AMD Radeon RX 6900XT. NVIDIA’s RTX3080 was frequently dropping to 57fps. Thankfully, though, those with G-Sync monitors will be able to enjoy the game, even with these framerate drops. 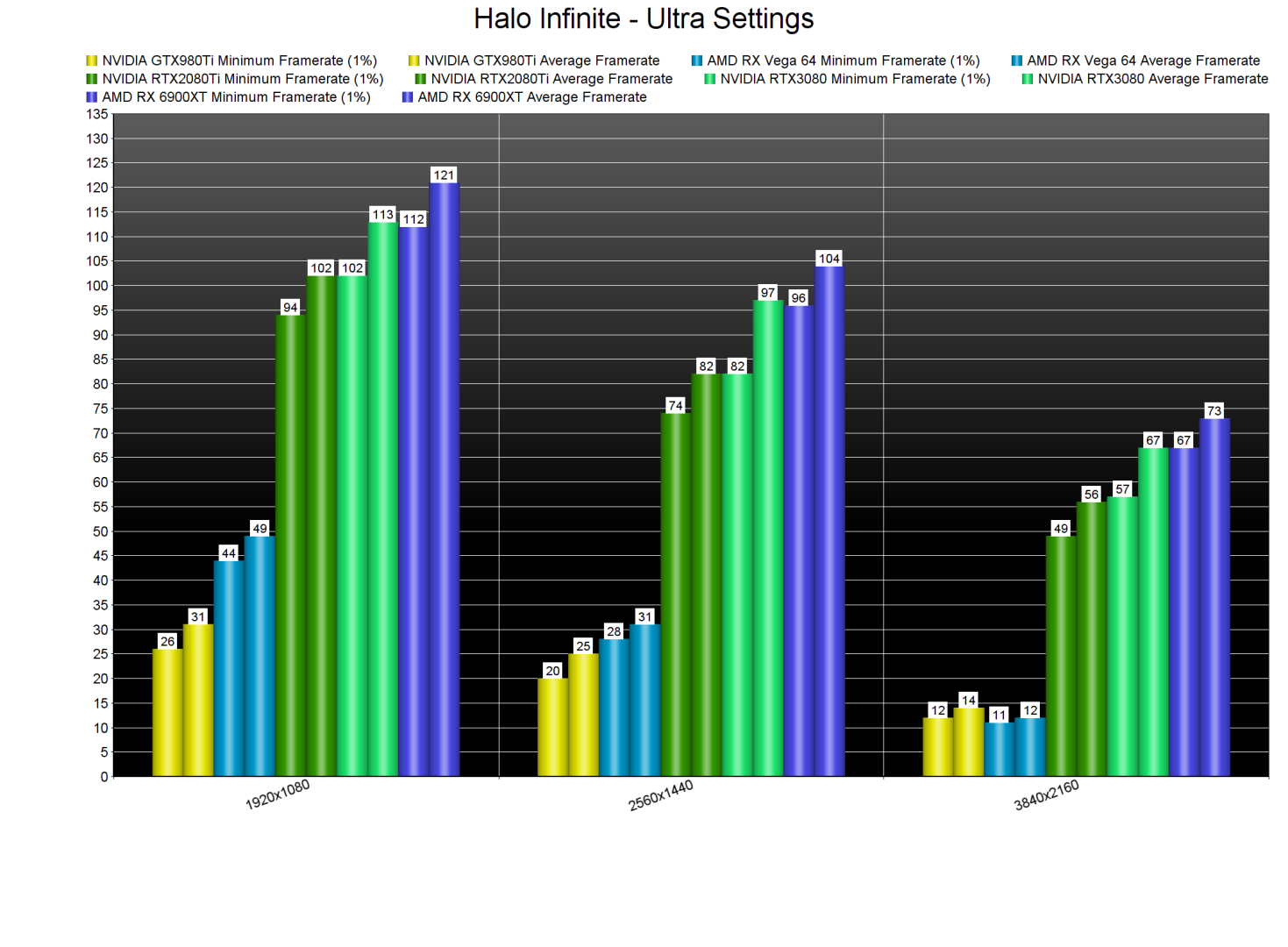 Graphics-wise, Halo Infinite looks great. 343 Industries has used a lot of high-resolution textures, and the game comes with a great lighting system. Thankfully, and contrary to other games, there aren’t annoying pop-ups right in front of you. This does not mean of course that you won’t notice any pop-ins of shadows or objects. However, things are not as awful as in some of the latest games like ICARUS or Guardians of the Galaxy.

Unfortunately, though, there are numerous technical issues with Halo Infinite. The cut-scenes, for instance, feel jittery/stuttery even at high framerates. For some weird reason, some animations are also locked at 30fps. Furthermore, the game on NVIDIA’s latest GPUs appears to be struggling right now. Whether performance will increase via future drivers remains to be seen. 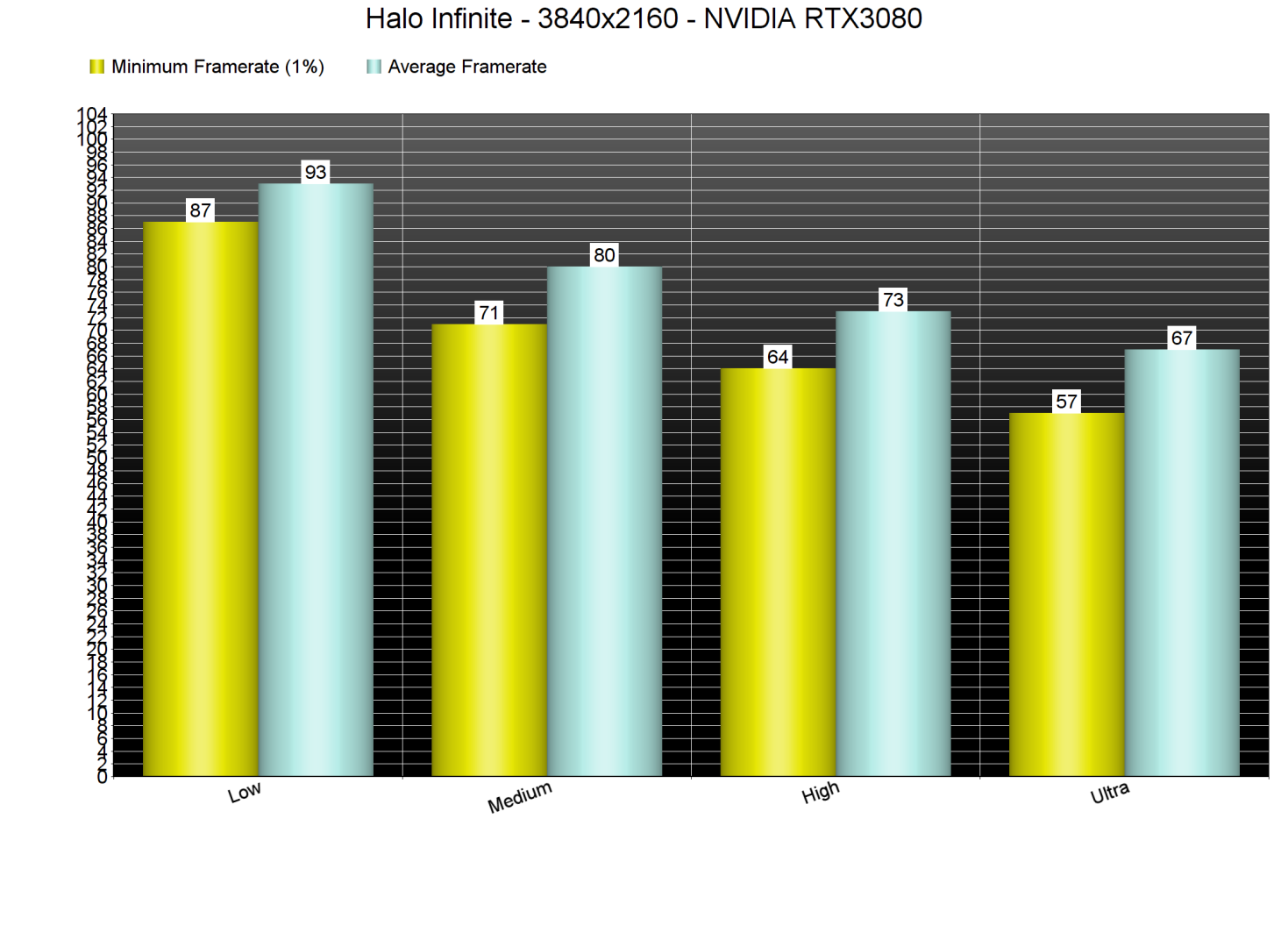 All in all, Halo Infinite is a mixed bag. While this is not one of the most optimized PC games of 2021, it’s also certainly not one of the worst optimized PC games of 2021. It’s somewhere in the middle. The game can look great on the PC and runs great on the latest AMD GPUs. However, there is definitely room for improvement here, especially on NVIDIA’s hardware and on older-generation GPUs. Oh, and make sure to disable Screen Shake as it’s locked at 30fps, making the game feel stuttery when running. 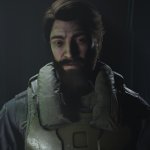 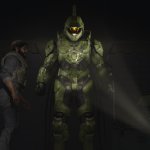 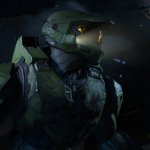 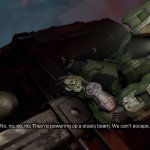 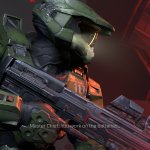 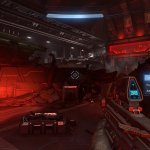 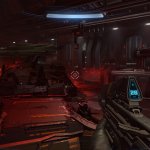 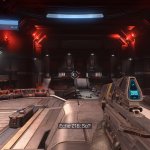 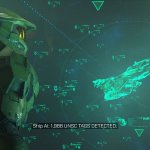 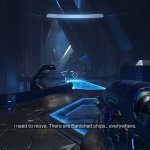 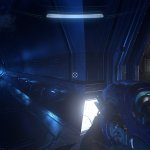 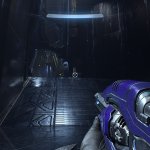 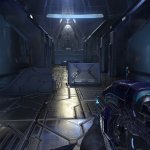 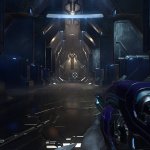 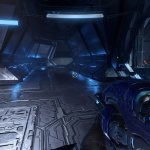 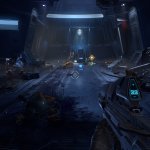 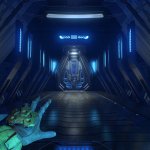 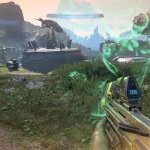 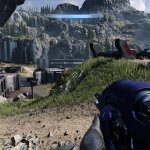 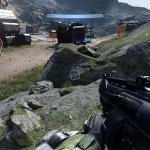 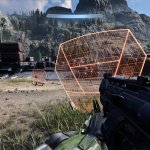