When Bandai Namco announced that Slightly Mad Studios was working on a Fast & Furious game, we were expecting a pretty polished PC product. After all, this new racing game is using the Madness Engine and Project CARS 2 ran great on the PC. So, time to benchmark Fast & Furious: Crossroads and see how it performs on the PC platform. 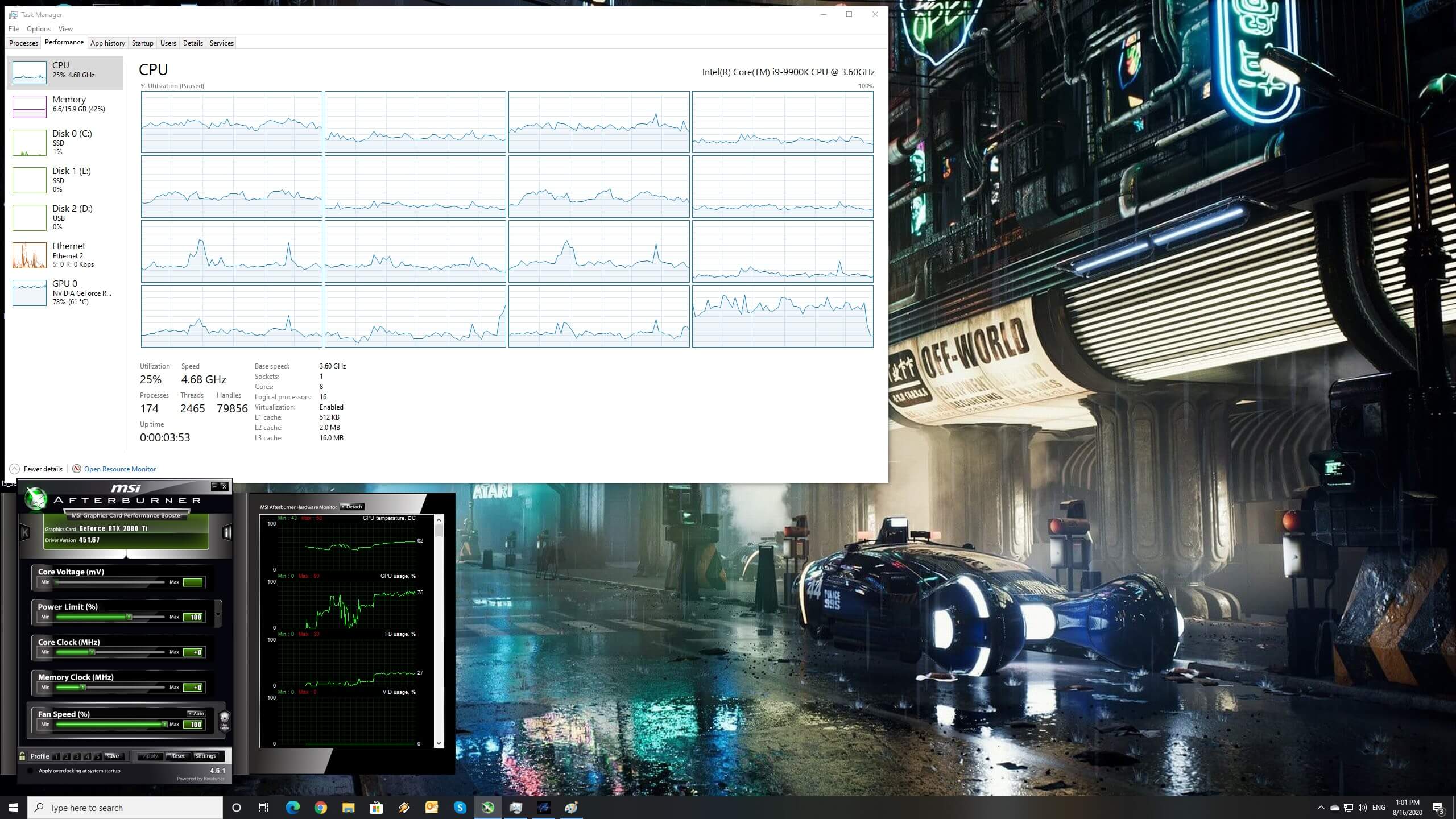 Fast & Furious: Crossroads offers laughable PC graphics settings. The game only allows you to adjust a universal graphics setting, and that’s it. Moreover, and each time you change a resolution, you have to restart the game. Seriously, the game cannot change resolutions on the fly. 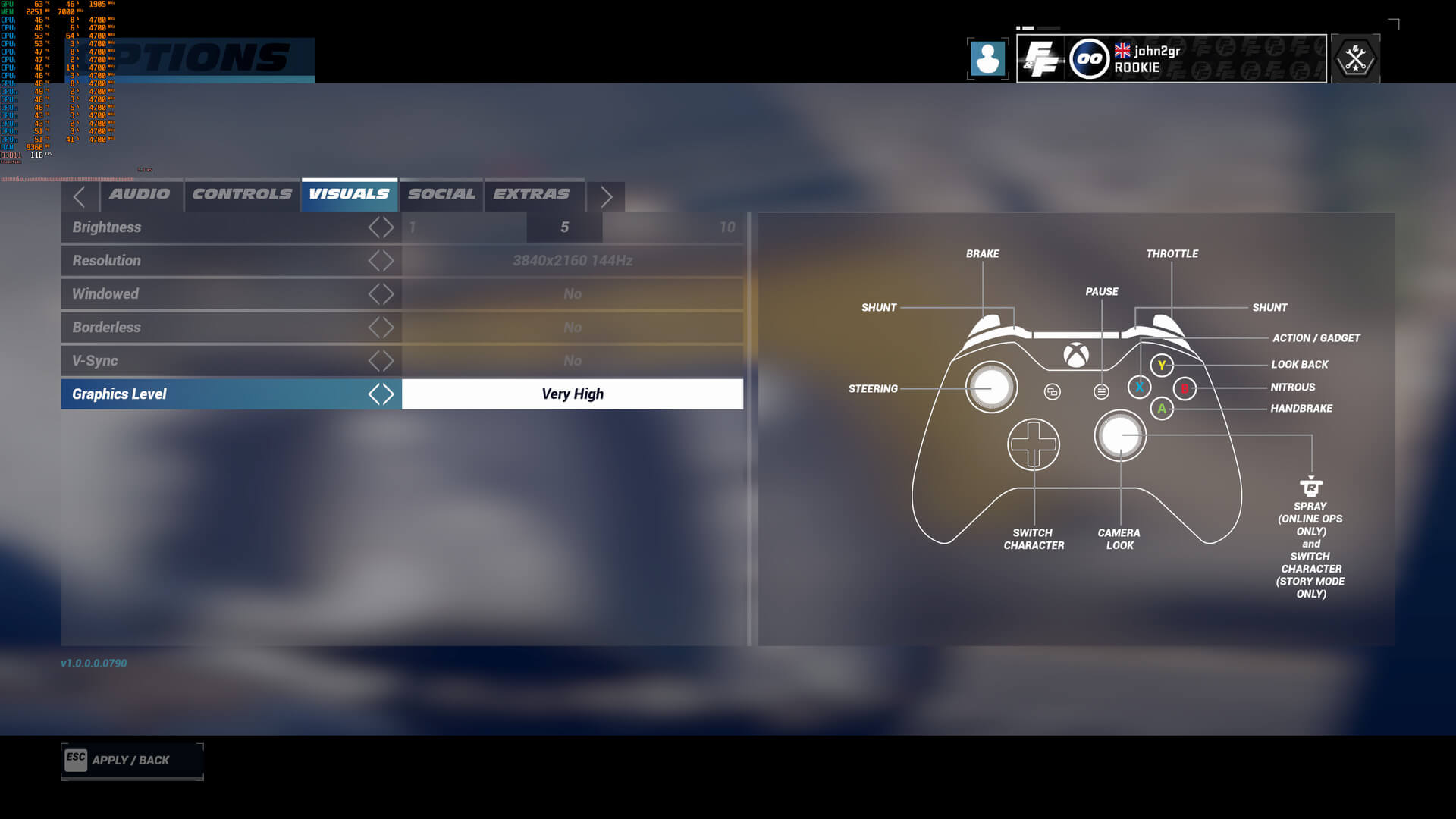 In order to find out how the game scales on multiple CPU threads, we simulated a dual-core, a quad-core and a hexa-core CPU. And the good news here is that the game does not require a high-end CPU. Without Hyper Threading, our simulated dual-core was able to push a minimum of 52fps and an average of 61fps at 1080p on Very High settings. With Hyper Threading enabled, we were able to get a constant 60fps experience. 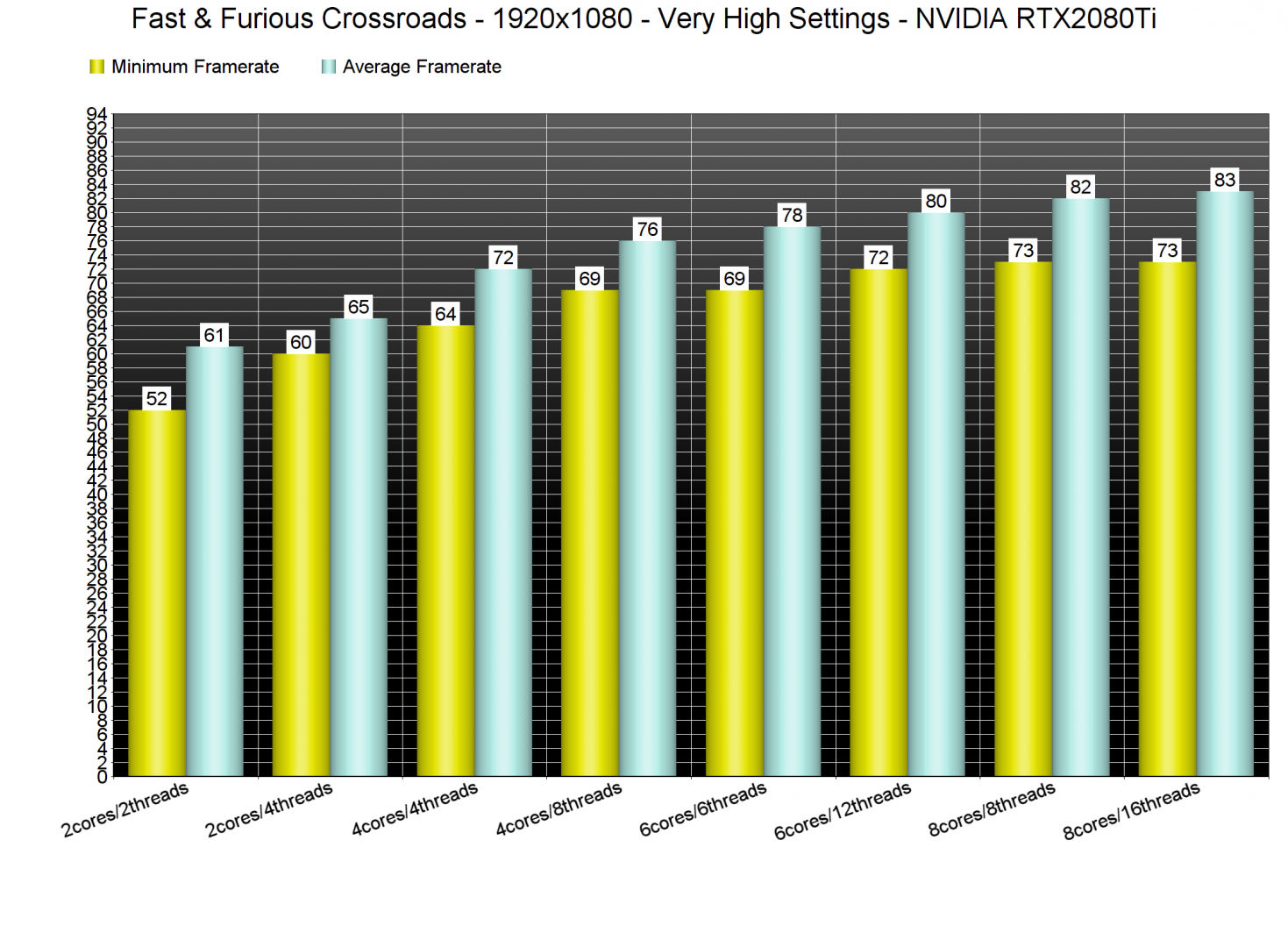 Unfortunately, the game does not scale well on older generation CPUs. Our Intel i7 4930K was unable to offer a constant 60fps experience. So yeah, if you’re still gaming on older CPUs, you may experience performance issues with this arcade racing game. 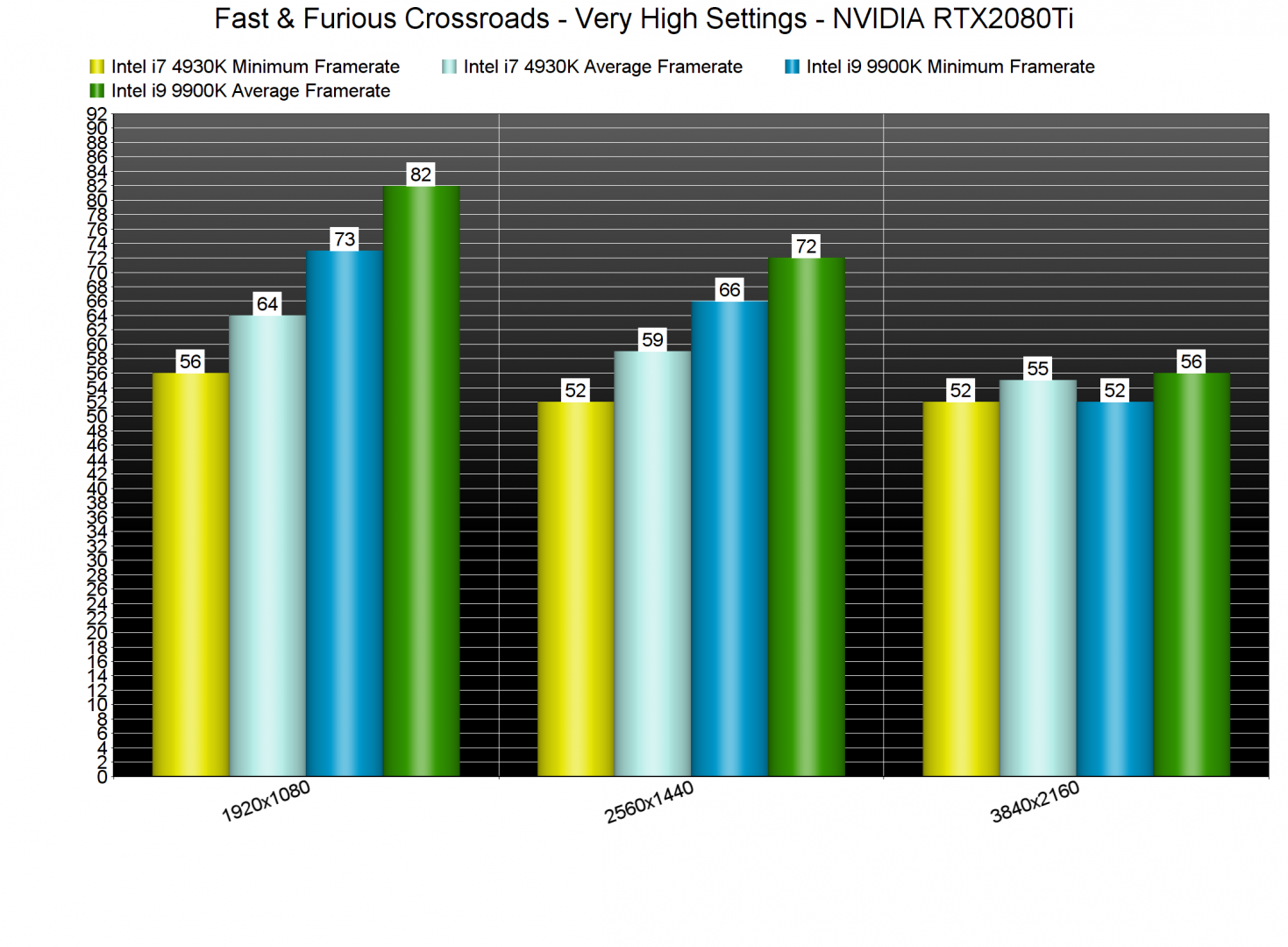 PC gamers will also need a high-end GPU in order to play this game, even at 1080p. The only GPUs that were able to offer a constant 60fps experience were the Vega 64 and the RTX2080Ti. 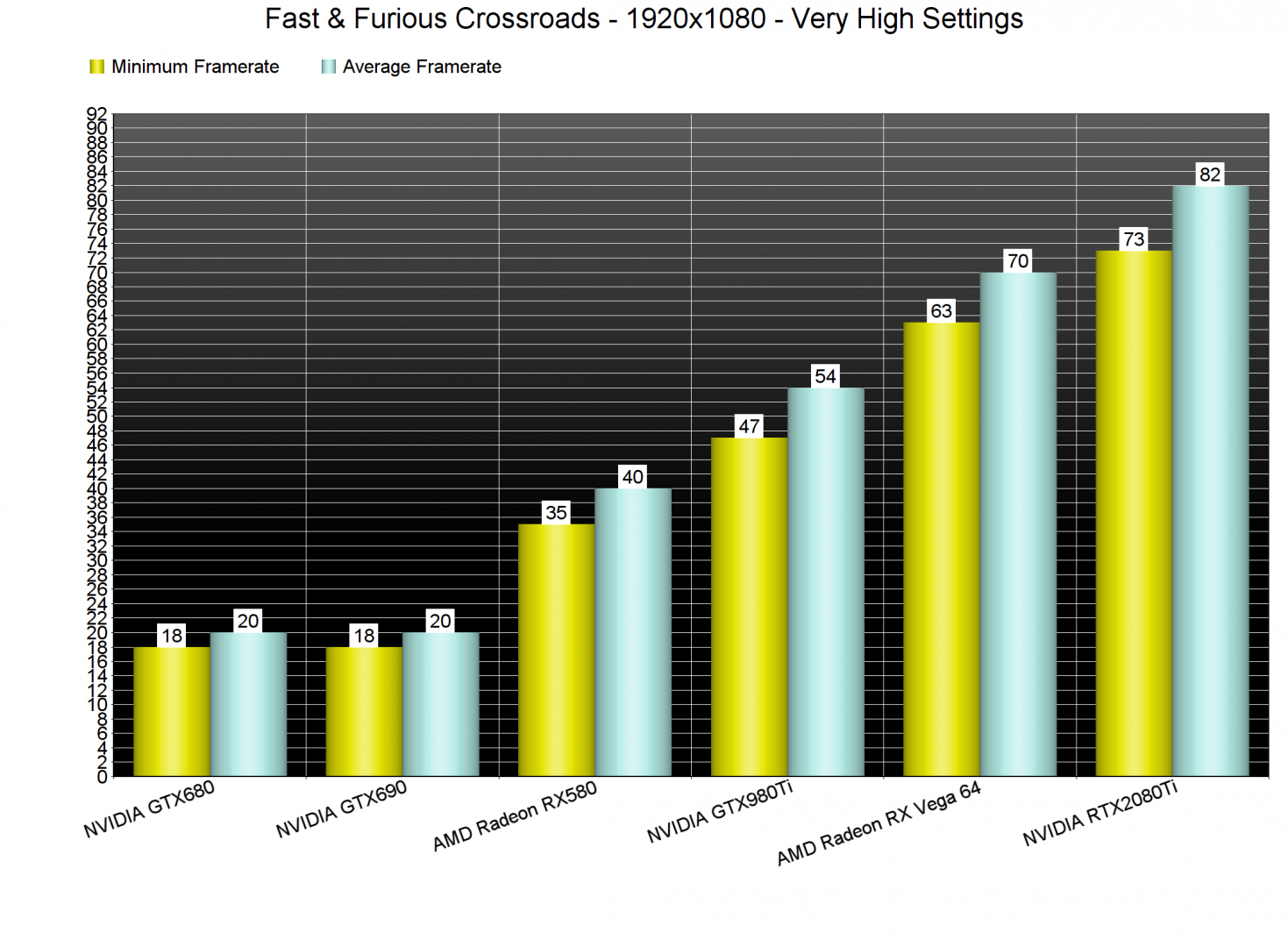 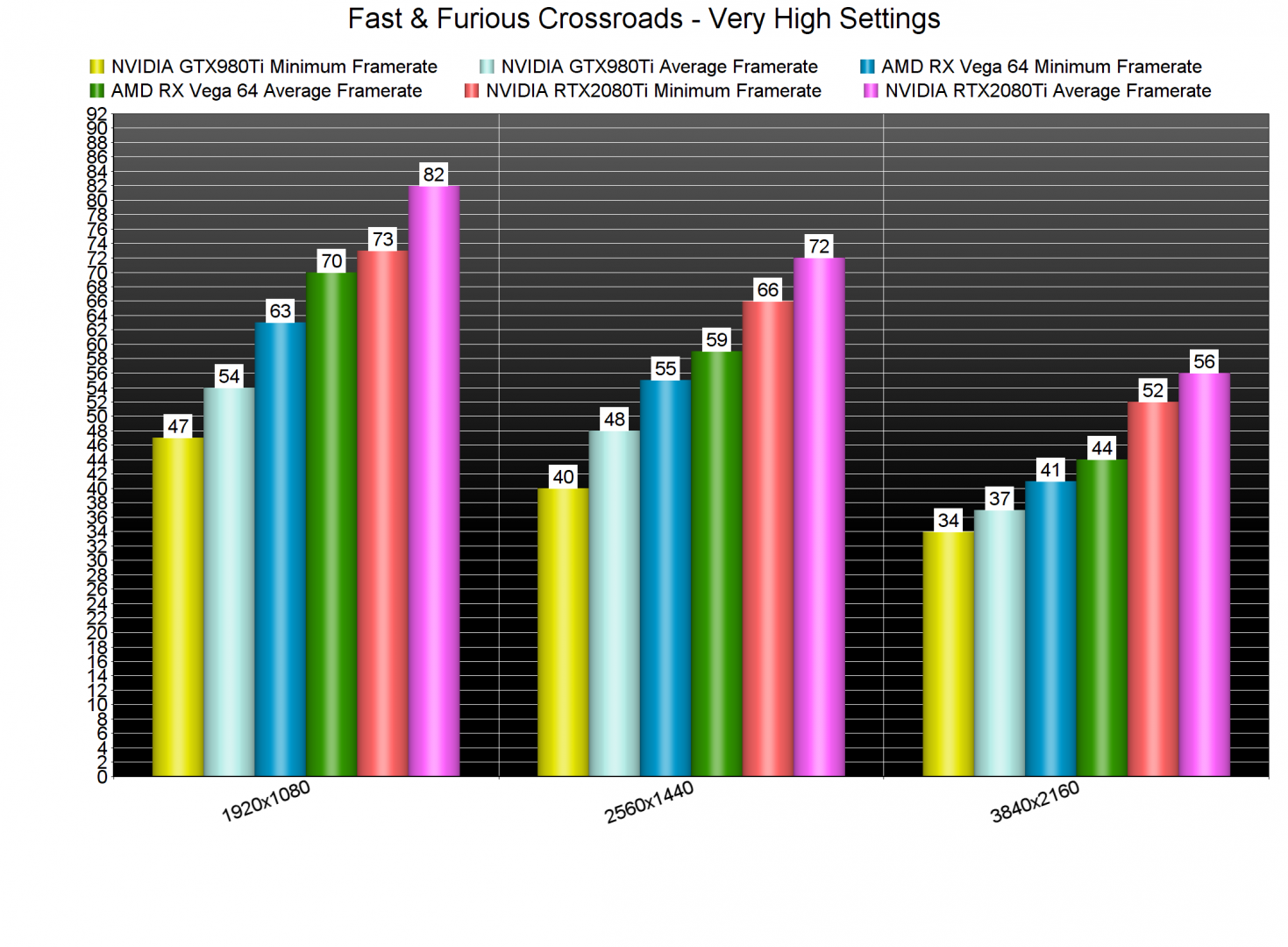 Before closing, the game could not use our RTX2080Ti to its fullest at all available resolutions. We don’t know what is going on, but our GPU usage was at only 80% in 4K/Very High settings. Normally, this could indicate a CPU/memory limitation. However, there was a noticeable performance hit when we lowered our resolution from 4K to 1440p, so that’s not the case here. We seriously don’t know what is going on, and we don’t really expect Tigon Studios to fix this optimization issue.

Now we wouldn’t mind these performance figures if Fast & Furious Crossroads pushed great visuals. However, and as you can see in the following screenshots, this game looks bad even on Very High settings. There are major pop-in issues every few meters, there are flashing shadows, there are mediocre textures all over the place, and everything looks “meh”. For this kind of graphics, this game should fly even on the GTX980Ti. Instead, Fast & Furious Crossroads performs and looks significantly worse than Forza Horizon 4.

Not only that, but the game lacks simple PC features. Fast & Furious Crossroads does not let you remap your keys, and displays gamepad icons when using the keyboard. Ironically, Project CARS 2 works fine with a keyboard, and displays proper keyboard keys. My guess is that Tigon Studios is responsible for the state of the PC version as Slightly Mad Studios may have simply offered support for its engine (and nothing more).

In conclusion, Fast & Furious Crossroads performs horribly, looks bad, and lacks simple PC features. This is easily one of the worst optimized PC games of 2020. It also cannot come close to other open-world racing games, like Forza Horizon 4.