Dark Souls 2 has just been released on the PC and it’s time to see whether or not FromSoftware has learned from its mistakes. Before starting, let’s get one thing straight; no. The lighting system that wowed everyone when Dark Souls 2 was initially introduced is nowhere to be found. Yeap, FromSoftware removed that lighting system from the PC version too, something that does not surprise us. While FromSoftware claimed that the PC version was the lead platform for Dark Souls 2, it is obvious that this was a lie. If the PC version was the lead platform then there was no reason to remove it. After all, the lighting system was removed from console versions because the game could not run acceptably on them, something that is not an issue at all on the PC.

As always, we used an overclocked Q9650 (4.2Ghz) with an Nvidia GTX690, 4GB of RAM, Windows 7-64Bit and the latest version of the ForceWare drivers. Dark Souls 2 is not a demanding title, especially when it comes to its CPU requirements. Our Q9650 was not stressed at all and was able to provide a constant 60fps experience. Moreover, we did not witness any slowdowns even when we simulated a dual-core CPU, meaning that those with older CPUs will be able to enjoy this new Dark Souls title. 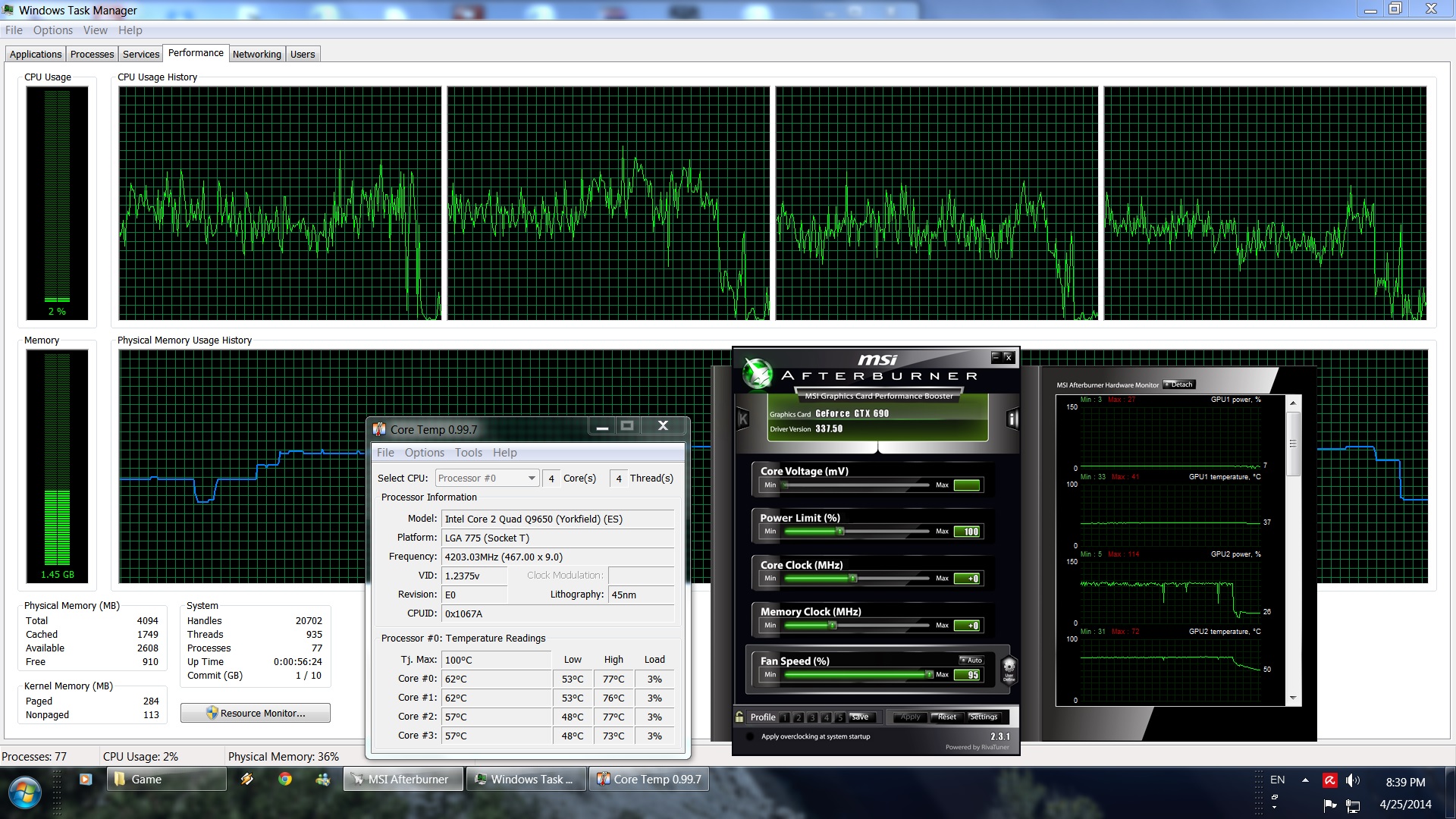 When it comes to its GPU requirements, Dark Souls 2 can be quite demanding when you combine Nvidia’s ‘Quality’ ambient occlusion with really high resolutions. Unfortunately there is no SLI profile for Dark Souls 2, meaning that only one of our GPU cores was being used. Therefore, a single GTX680 will be able to handle the game with all its bells and whistles enabled at 1080p. A GTX680 is also able to provide an amazing 4K experience, as we tested the game at 3840×2160 without any performance drops. Yes, contrary to its predecessor, Dark Souls 2 does not suffer from any resolution limitation. And while the game comes with a locked framerate, it’s not as low as the one found in the first part of the series (60fps versus 30fps).

As said, Nvidia owners can enable higher levels of ambient occlusion. The downside of this, however, is that this tweak comes with a huge performance impact. Following Durante’s guide, we managed to enable ‘Quality’ AO for Dark Souls 2. Unfortunately though, the game had major performance issues at both 3840×2160 and 3200×1800. We were able to play the game with constant 60fps at 2560×1440, however there was noticeable aliasing (we had the in-game AA disabled as it was blurring the textures). Given the fact that the difference between the default and Nvidia’s Quality AO is minimal, we strongly suggest avoiding this new AO technique. After all, it’s way better playing the game at a higher resolution than enabling a more demanding AO effect.

Back in 2012, we honored Dark Souls with our “Worst PC Optimized Title” award. Thankfully, Dark Souls 2 is not as half-assed as its predecessor. FromSoftware has included a nice amount of graphical options to tweak, and players can bind almost all keys. There is a slight mouse acceleration side-effect (can be easily noticed while moving the mouse really, really slow), though it’s not as annoying as in other titles. Thankfully, the overall mouse support is better this time around, meaning that the game can be played with keyboard+mouse. Hooray. 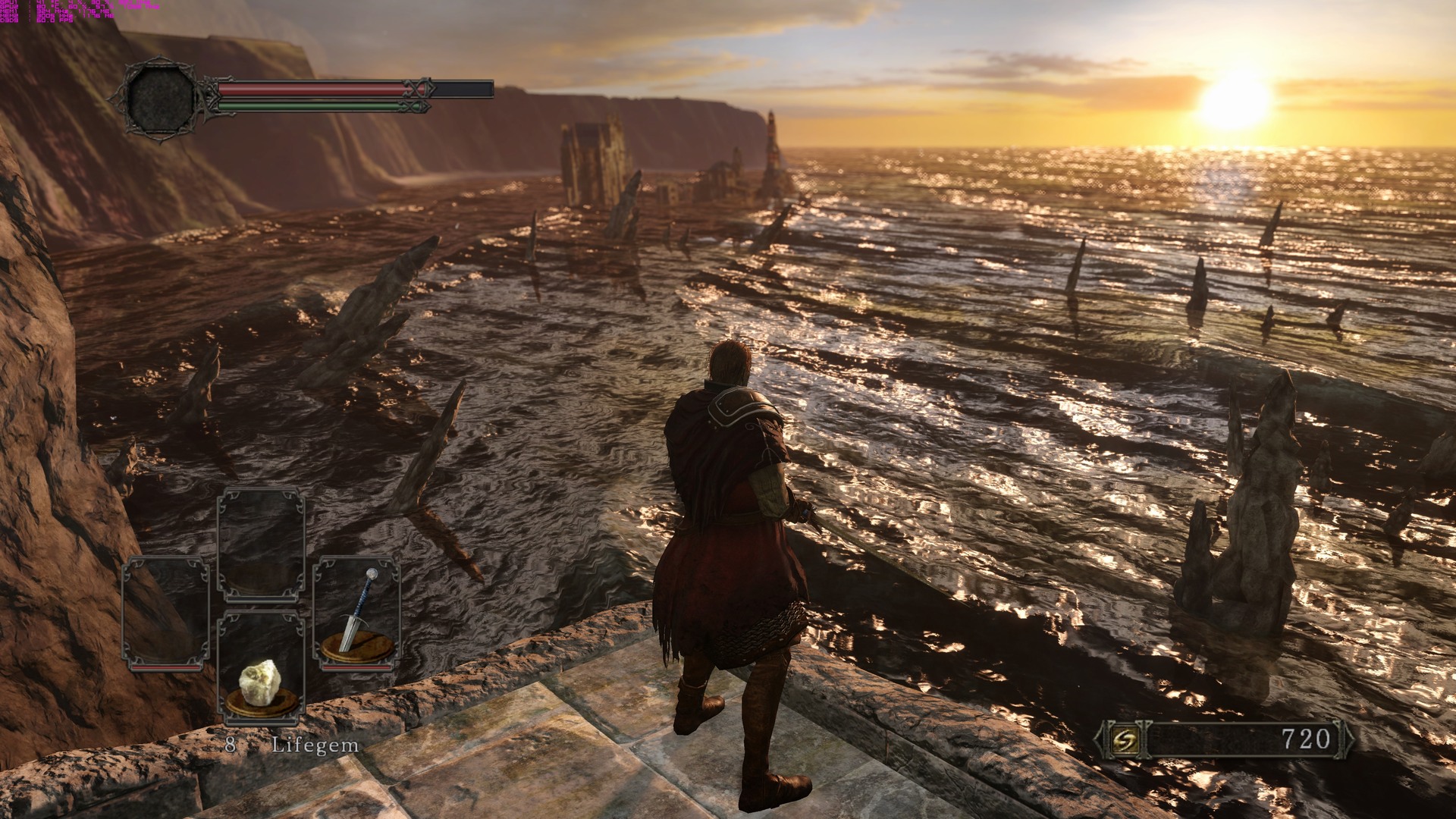 Still, things could have been way, way better. Let’s overlook for a second the fact that there are a lot of low-res textures. FromSoftware claimed that it has used really high-resolution textures on the PC version and while this may be partially true, most textures look as blurry as those found in most multi-platform titles. But that’s not of a big issue as PC gamers can use SweetFX to improve things. What will certainly frustrate you – especially if you want to use keyboard+mouse – is the fact that the game displays the X360 icons instead of the keyboard keys you’ve been using.

So imagine yourself, playing the game, going through the tutorials, and being asked to push the LT in order to parry. LT? What does LT do? So you hit “ESC” to bring up the main Menu, and start looking for that LT. Most games feature an X360 layout so there must be something similar here, right? Nyah. Nothing. Zip. Now at this point, most will say that Dark Souls 2 was developed to be played with a gamepad. Well, that’s because the developers are at fault. Dark Souls 2 requires precision, and the keyboard+mouse combo is ideal for such titles. The ability to move quickly and accurately the camera is essential. It’s not like there haven’t been third-person RPGs on the PC before, so let’s not pretend that the keyboard+mouse combo is not suited for them. The problem here is that FromSoftware decided to remind us how stubborn most developers are when porting their games from consoles.

If you still don’t get what we’re talking about, here is an example: Imagine playing a game on X360 (or PS3). During the tutorial, the game asks you to press ‘F/B + Right Mouse Button’ to perform a move. Would that frustrate you? Of course and it would, especially when there is no explanation of what F, B and RMB actually do.

Graphics wise, Dark Souls 2 is at least better looking than its console counterpart. Thanks to the ability to use higher resolutions, PC gamers can enjoy crisped visuals. There are a lot of low-resolution textures, and the lighting system has been degraded. Seriously, there are occasions where the lighting is simply awful. Still, PC gamers can use SweetFX to improve the image quality of the game. Below you can find a comparison between the vanilla (left) and our SweetFX version (right).

All in all, Dark Souls 2 feels like most multi-platform titles. While it is not as bad as its predecessor, it’s not up to what Nixxes, Crytek, DICE and United Front Games have offered. And while there is a nice amount of graphical options to tweak, the game suffers from mouse acceleration side-effects. Furthermore, there are X360 button on-screen icons that are not explained at all in the main menu. Moreover, the PC version does not sport any major feature to justify Namco’s claims of it (a.k.a. the PC) being the lead platform. Dark Souls 2 is ‘functional’ from the get-go and once you figure out its control scheme, it can become really enjoyable. And while it is the definitive edition of Dark Souls 2, it’s not up to what we hoped. Well, at least we can give kudos to FromSoftware for avoiding this year’s ‘Worst PC Optimized Title’ award.