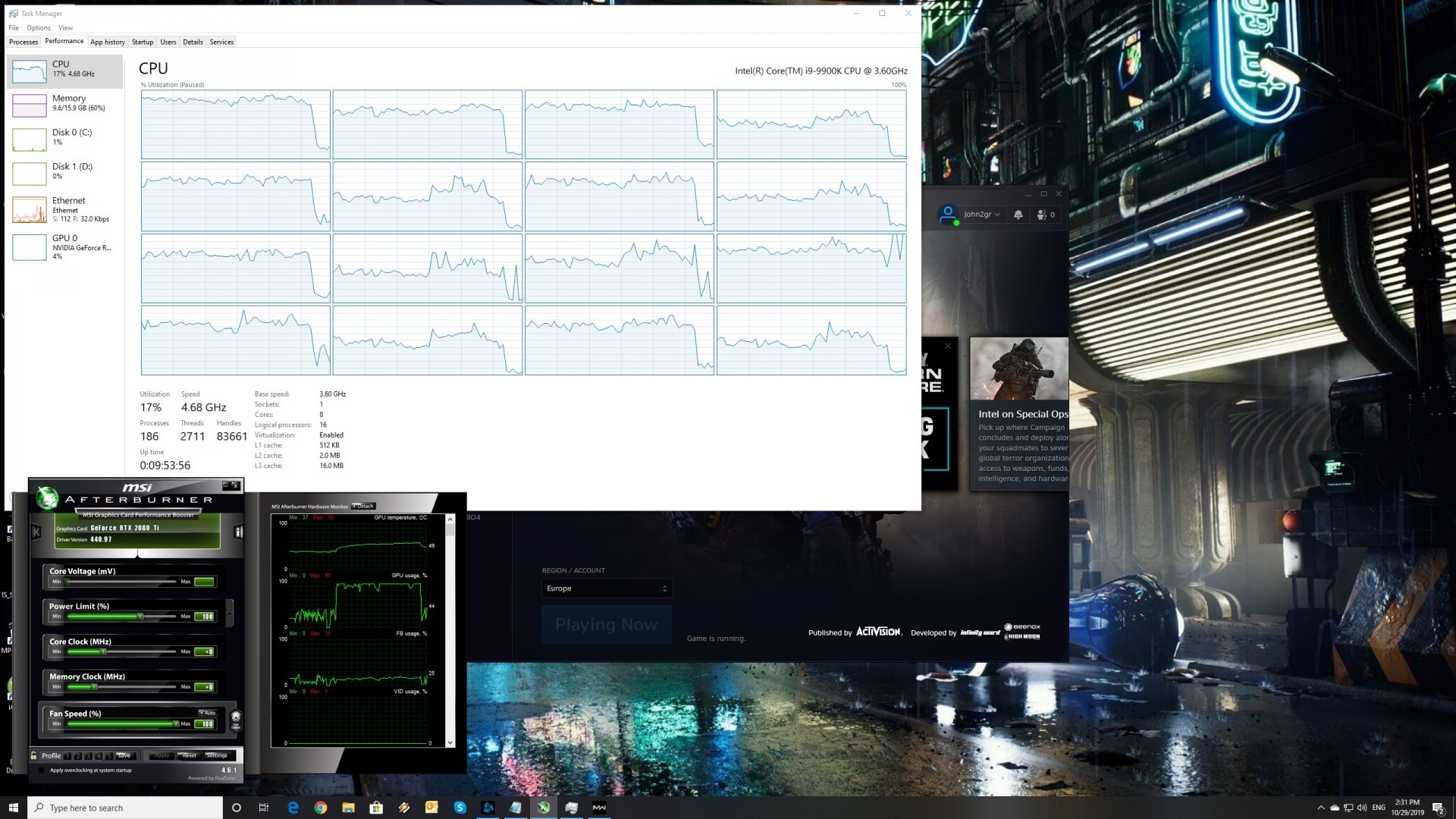 Similarly to Black Ops 4, Beenox has handled the PC version of COD: MW. The team has added numerous graphics settings to tweak, though the amount of settings does not come close to those found in Gears 5. PC gamers can adjust the quality of Textures, Anisotropic Filtering, Particles, Tessellation, Shadow Maps, Ambient Occlusion and Screen Space Refletions. There are also options for Bullet Impacts, Cache Spot Shadows, Ray Tracing, Depth of Field and Motion Blur. The game also features a resolution scaler, a framerate option and a Field of View slider.

Call of Duty: Modern Warfare does not feature any built-in benchmark tool. As such, we’ve used the Fog of War level for our GPU benchmarks. For our CPU benchmarks, we used the Embedded level (which featured numerous NPCs). We also dropped our resolution to 1280×720 (only for our CPU tests) so we could avoid any possible GPU bottleneck.

In order to find out how the game scales on multiple CPU threads, we simulated a dual-core, a quad-core and a hexa-core CPU. And we are happy to report that even a modern-day dual core system is able to run this latest COD title. However, you’ll need Hyper Threading, otherwise you’ll experience a lot of stutters. With Hyper Threading enabled, our simulated dual-core system was able to push a minimum of 104fps and an average of 112fps. 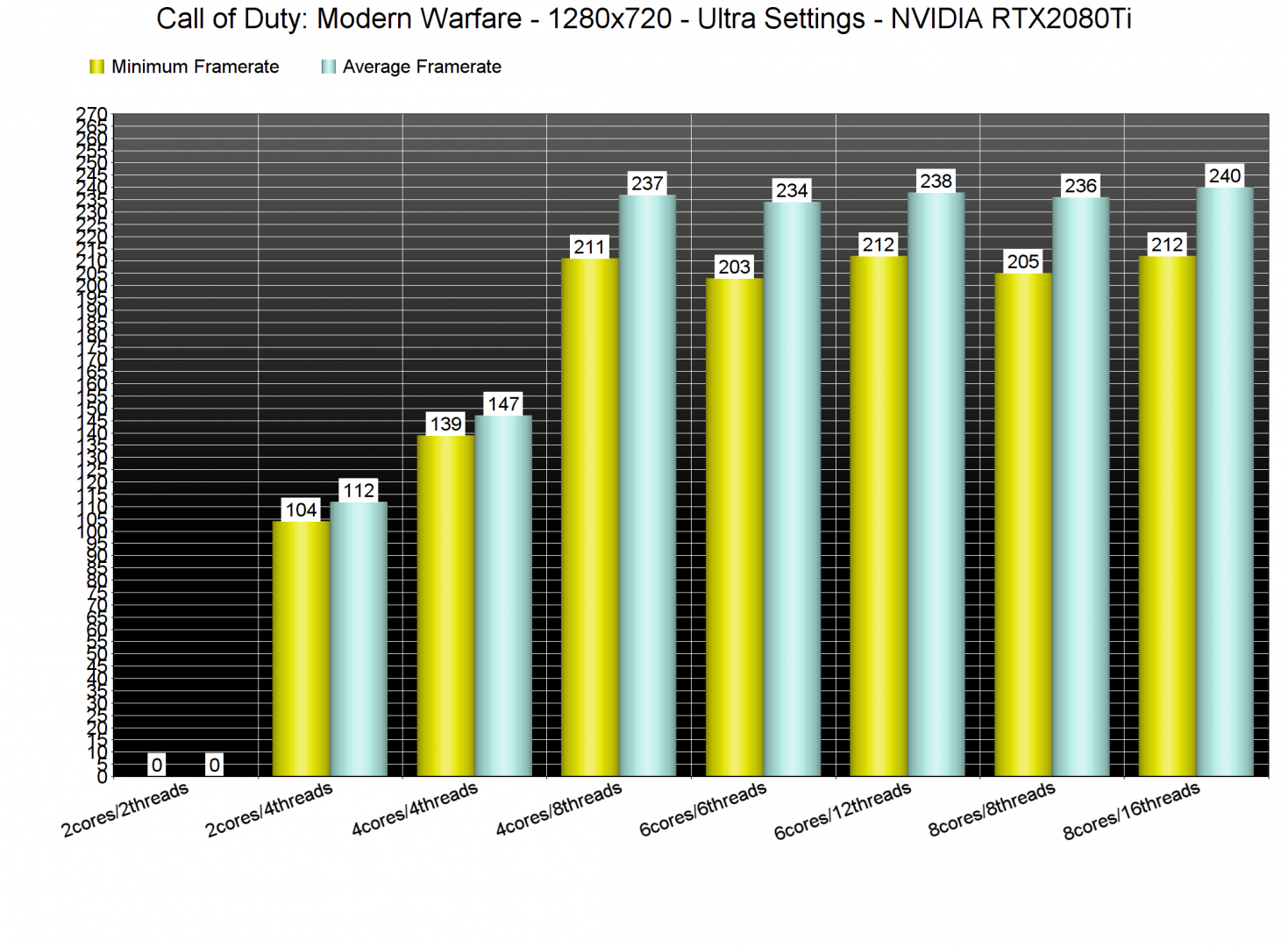 Thanks to DirectX 12, even our older Intel i7 4930K was able to provide an optimal gaming experience. Not only that, but contrary to other games, we were GPU-limited even at 1080p/Ultra. Call of Duty: Modern Warfare is another game that shows why developers should be using DX12 or Vulkan. Thanks to these low-level APIs, older CPUs can shine, even on modern-day titles. 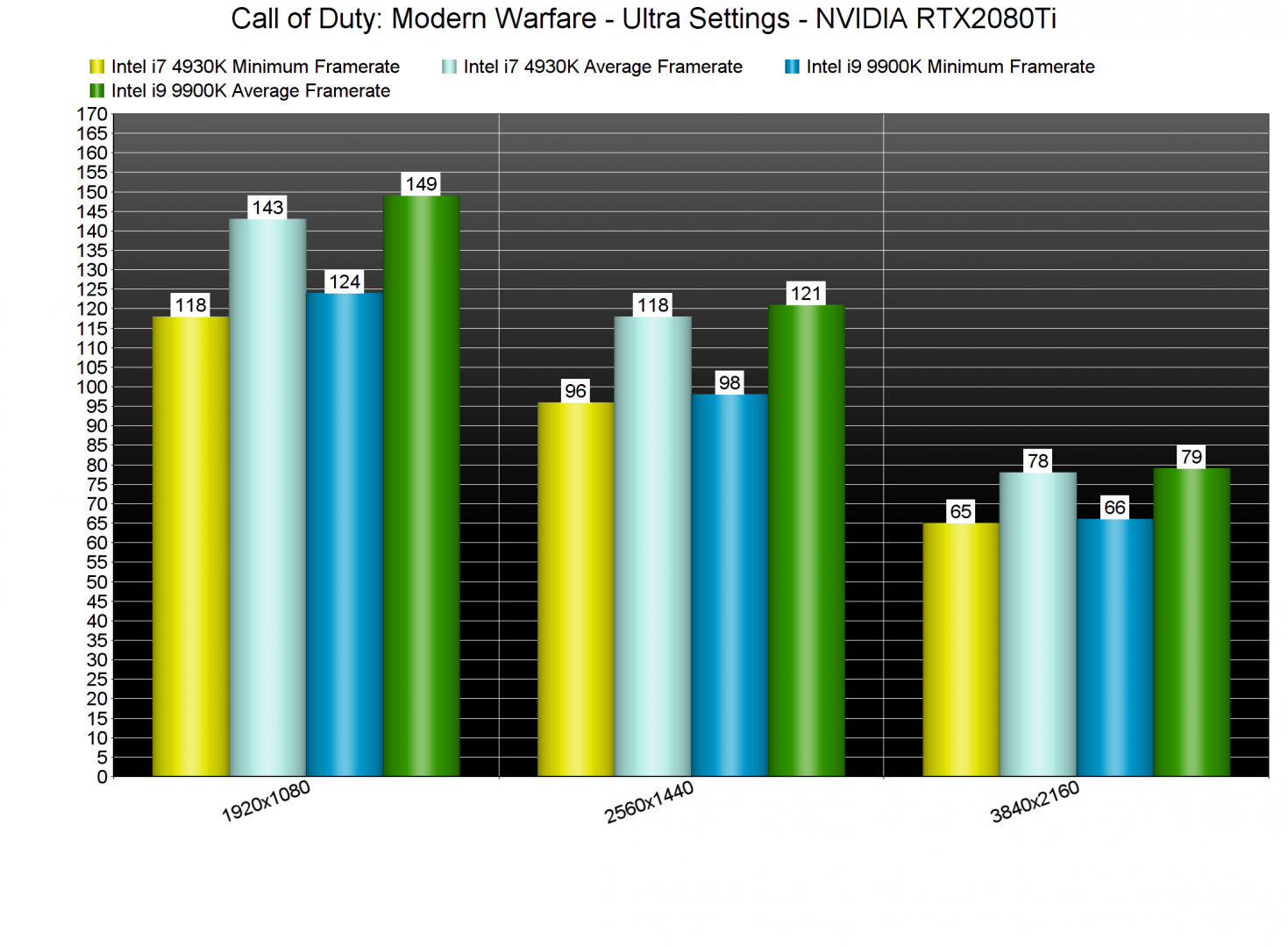 As it’s obvious, Call of Duty: Modern Warfare can be easily described as a GPU-bound title. Most of our GPUs were able to provide a smooth gaming experience at 1080p/Ultra, though there were some drops to 50fps on our Radeon RX580. Do note that these performance figures for our NVIDIA GPUs are without the Ray Tracing effects. If you are interested in these, we suggest reading this article. 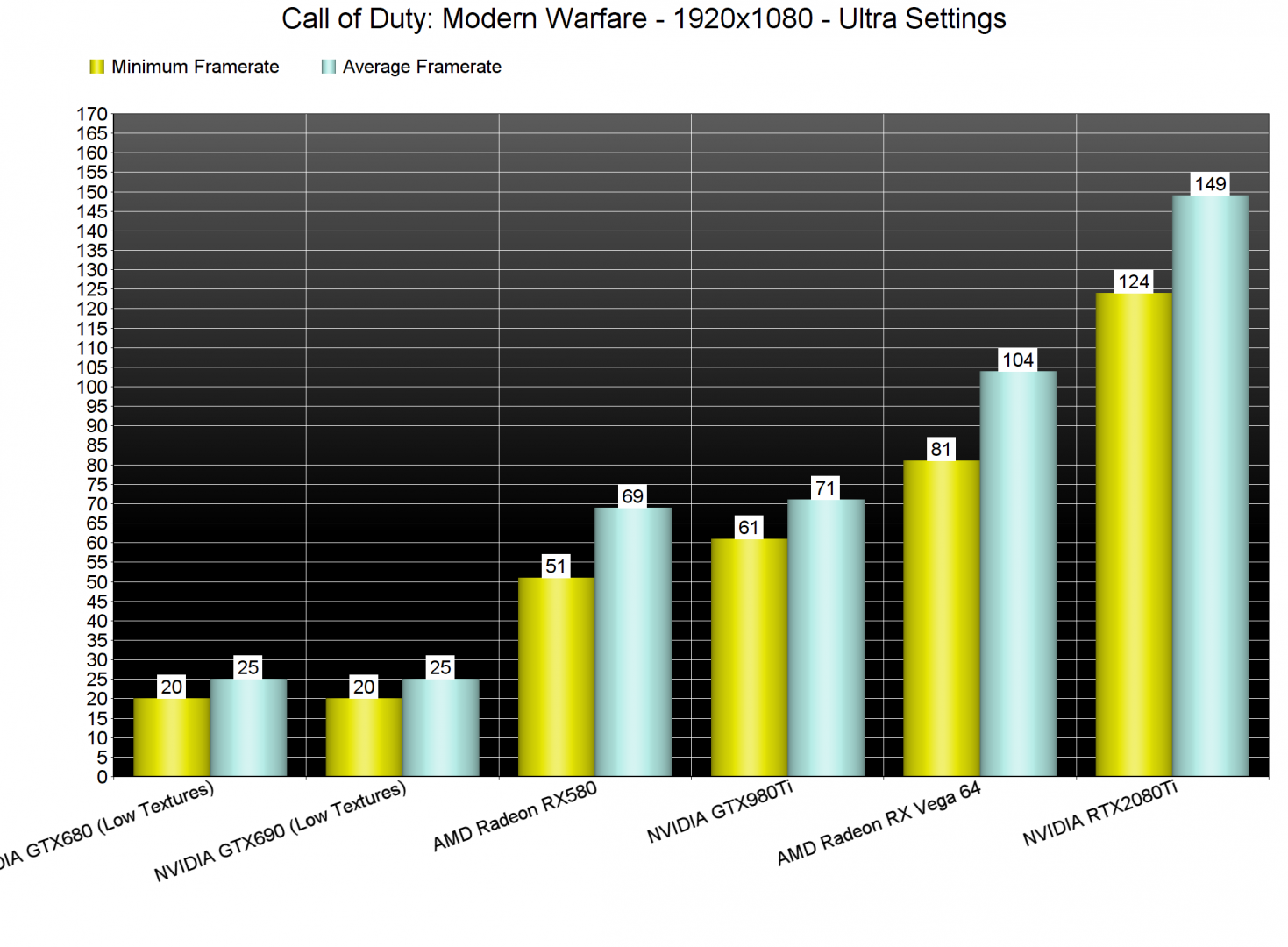 It’s worth noting here that COD: MW is one of the few games that runs great even on AMD’s hardware. Both our Radeon RX Vega 64 and NVIDIA RTX2080Ti were able to run the game smoothly at 2560×1440. As for 4K/Ultra, the only GPU that was able to offer a constant 60fps experience was the NVIDIA RTX2080Ti. 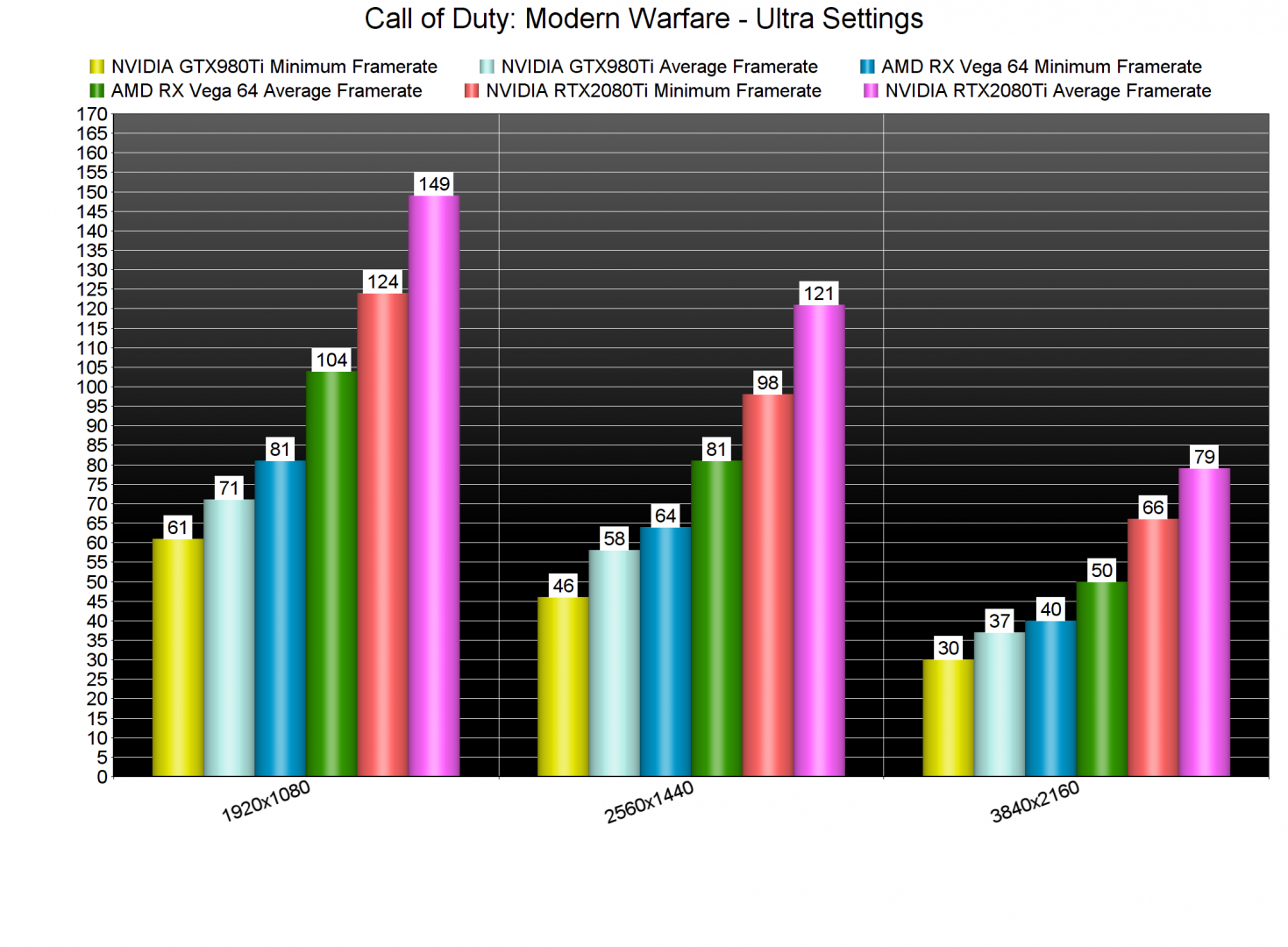 Now while the overall performance appears to be amazing, the game suffers from some ridiculous technical issues. As we’ve already reported, there is some annoying stuttering issues during the briefing cut-scenes that can desynchronize the audio. Moreover, there are some major pop-in issues even on Ultra settings. Also, this is the first COD game that requires a constant Internet connection, even for its single-player campaign. Some users also reported numerous crashes, however, we did not experience any stability issues while benchmarking it.

Graphics wise, Call of Duty: Modern Warfare looks amazing. The character models are among the best we’ve seen in a first-person shooter, and the animations are really smooth. There are a lot of cool environmental and particles effects, and the levels are full of small details. Everything looks top notch, except of the ridiculous pop-in of objects. Seriously, once you notice it, you’ll be unable to unsee it. We seriously hope that Beenox will provide a fix because these pop-ins can completely destroy the overall immersion and gaming experience.

All in all, Call of Duty: Modern Warfare runs great on the PC platform. However, and contrary to Black Ops 4, the game suffers from some truly annoying technical issues. Beenox have not commented yet on them, so we don’t know whether it plans to fix them. And that’s a shame because without, COD: MW can be truly described as one of the best PC games of 2019 (tech-wise of course).