After a one month delay, Activision has finally released Call of Duty Modern Warfare 2 Remastered on the PC. COD MW2 Remastered comes with improved textures, animations, physical rendering, HDR lighting, and more. As such, it’s time now to benchmark it and see how it performs on the PC platform. 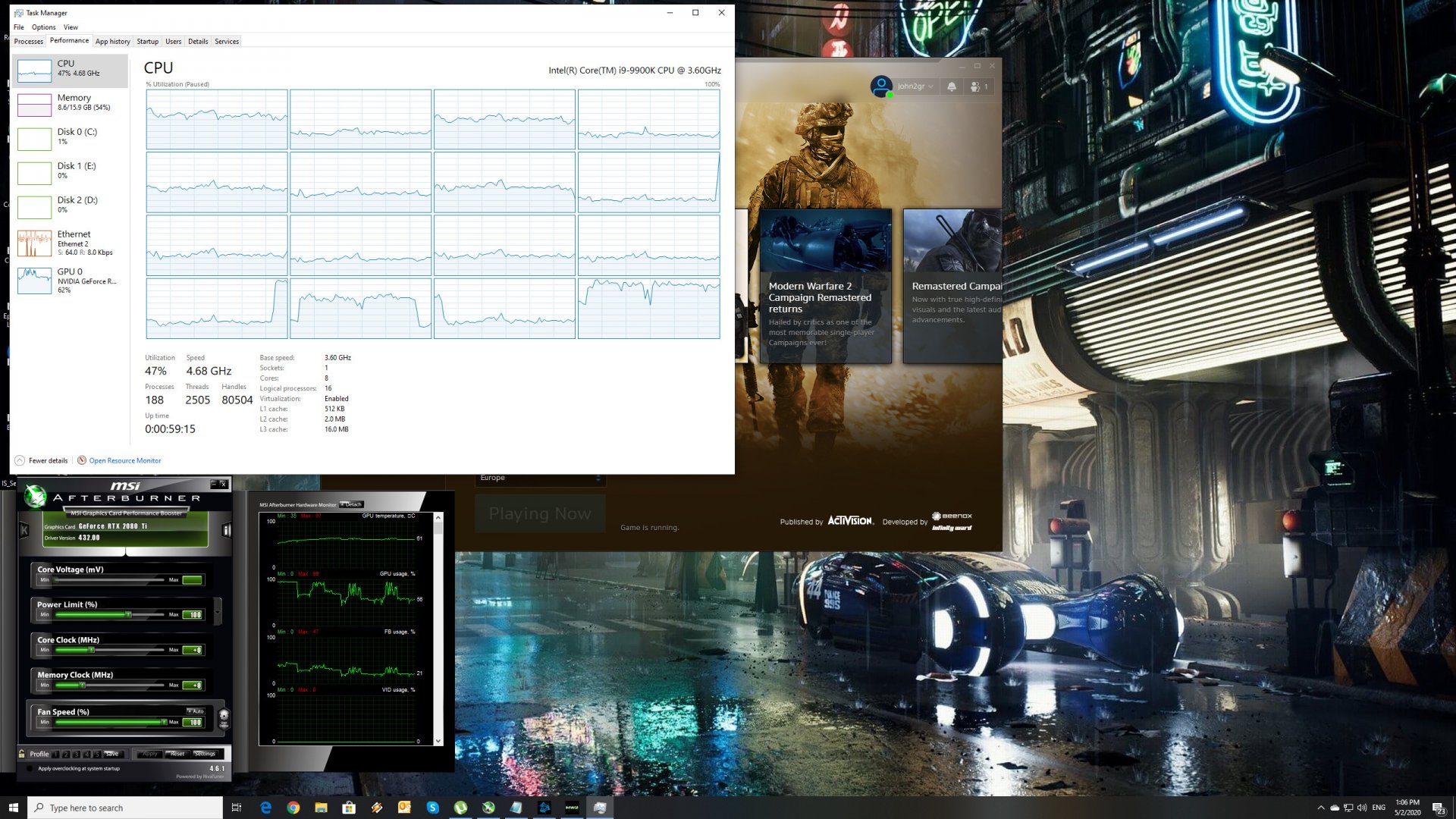 Infinity Ward and Beenox have added a lot of graphics settings to tweak. PC gamers can adjust the quality of textures, normal maps, specular maps, anisotropic filtering and shadows. There are also options for screen space ambient occlusion, depth of field, motion blur, subsurface scattering and depth prepass. Beenox has also added a FOV slider, and there are also options for ragdolls, dynamic lights and anti-aliasing. 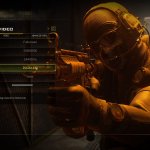 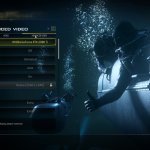 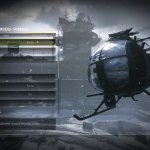 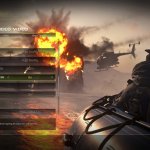 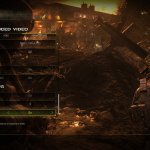 Call of Duty Modern Warfare 2 Remastered does not feature any buil-in benchmark tool. As such, we’ve used the beginning sequence of the “Team Player” mission in order to benchmark it. We also disabled the “Fill Remaining Memory” setting as it introduced instability issues.

In order to find out how the game scales on multiple CPU threads, we simulated a dual-core, a quad-core and a hexa-core CPU. Without Hyper Threading, our dual-core system was unable to run the game due to major stuttering issues. When we enabled Hyper Threading, though, our simulated dual-core was able to offer a smooth gaming experience. 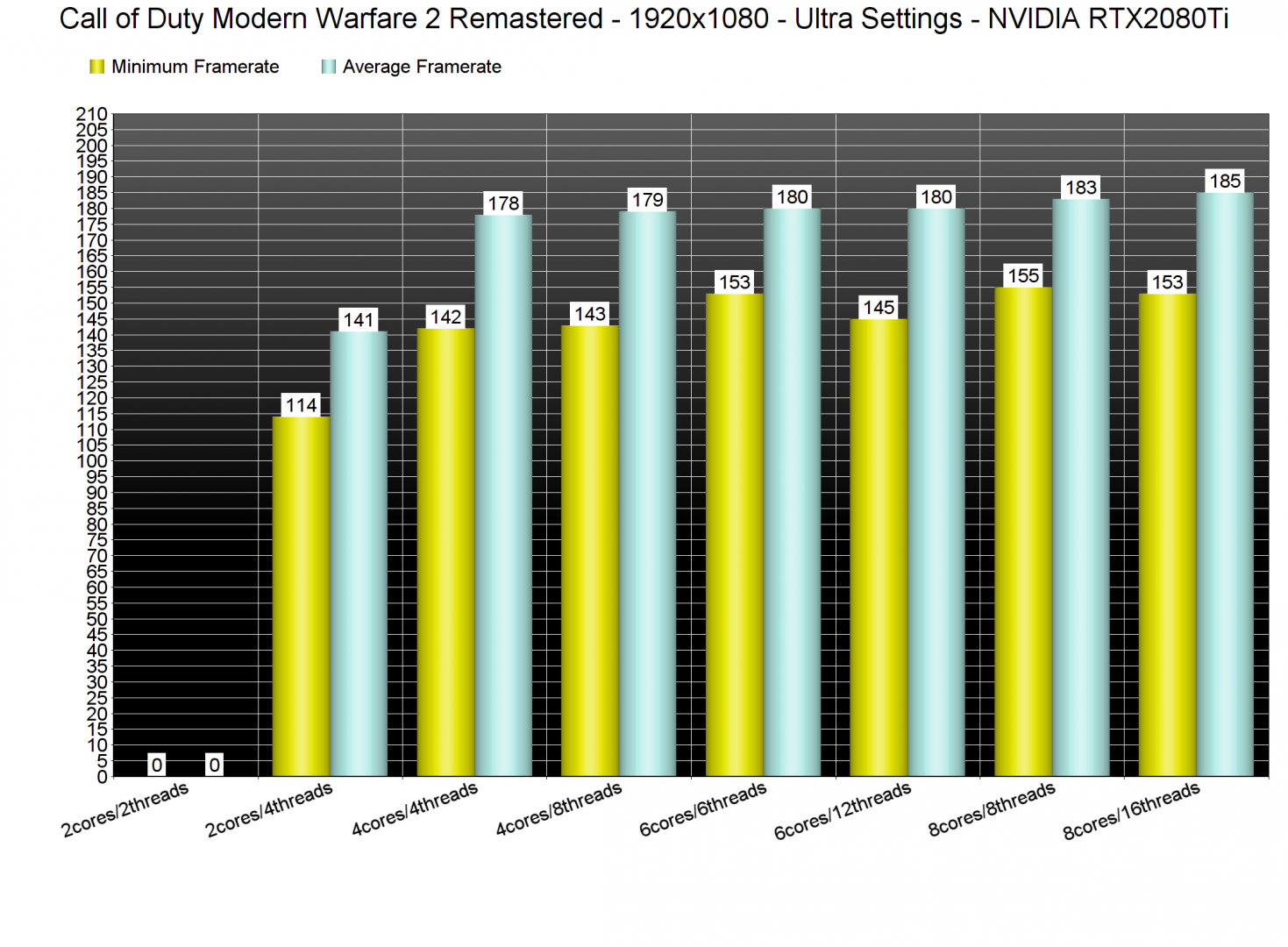 Call of Duty Modern Warfare 2 Remastered uses the DirectX 11 API and runs significantly better on newer CPUs. While our Intel i7 4930K was able to push a constant 60fps experience at 1080p/Ultra settings, it was noticeably slower than our Intel i9 9900K. 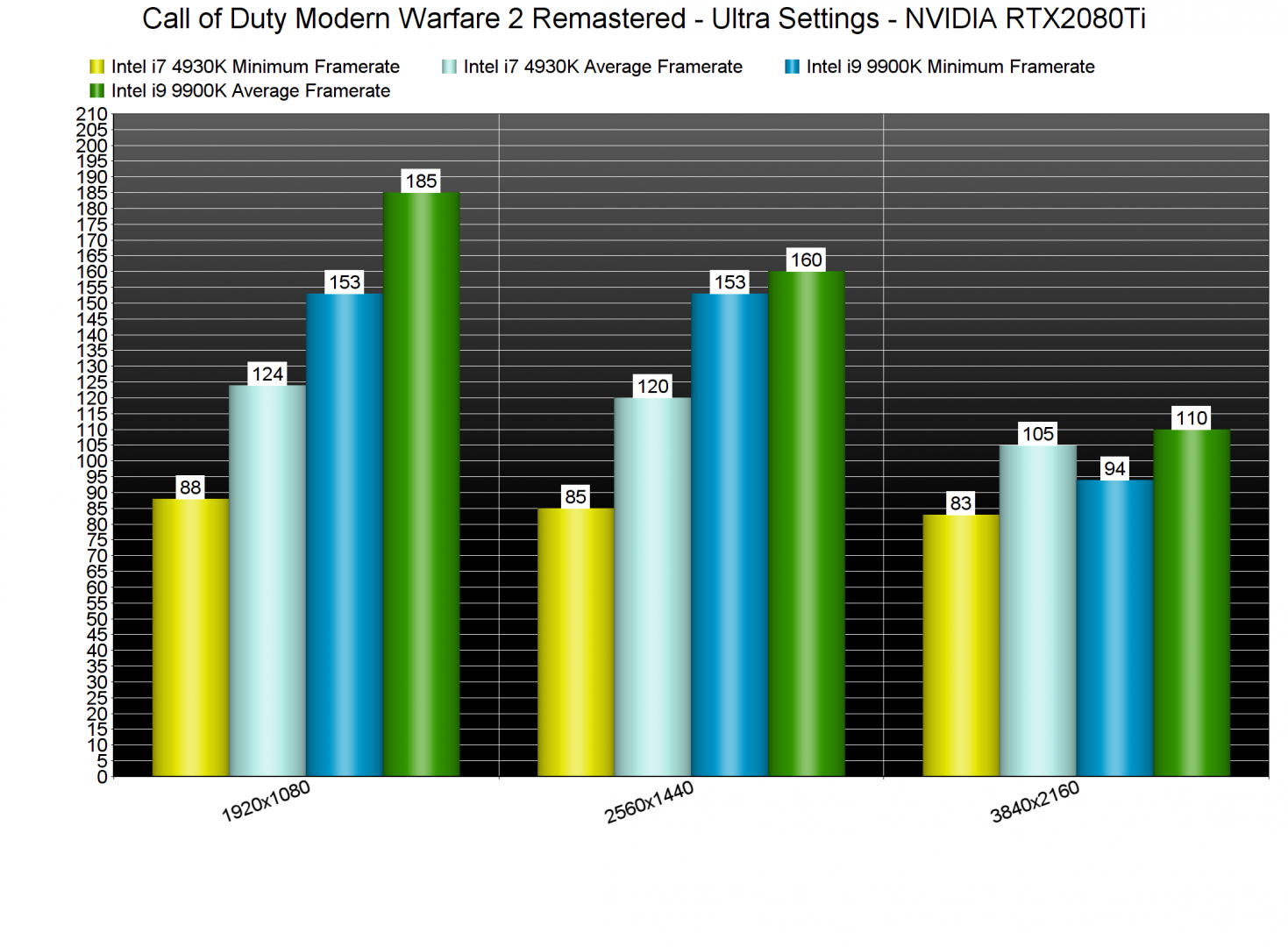 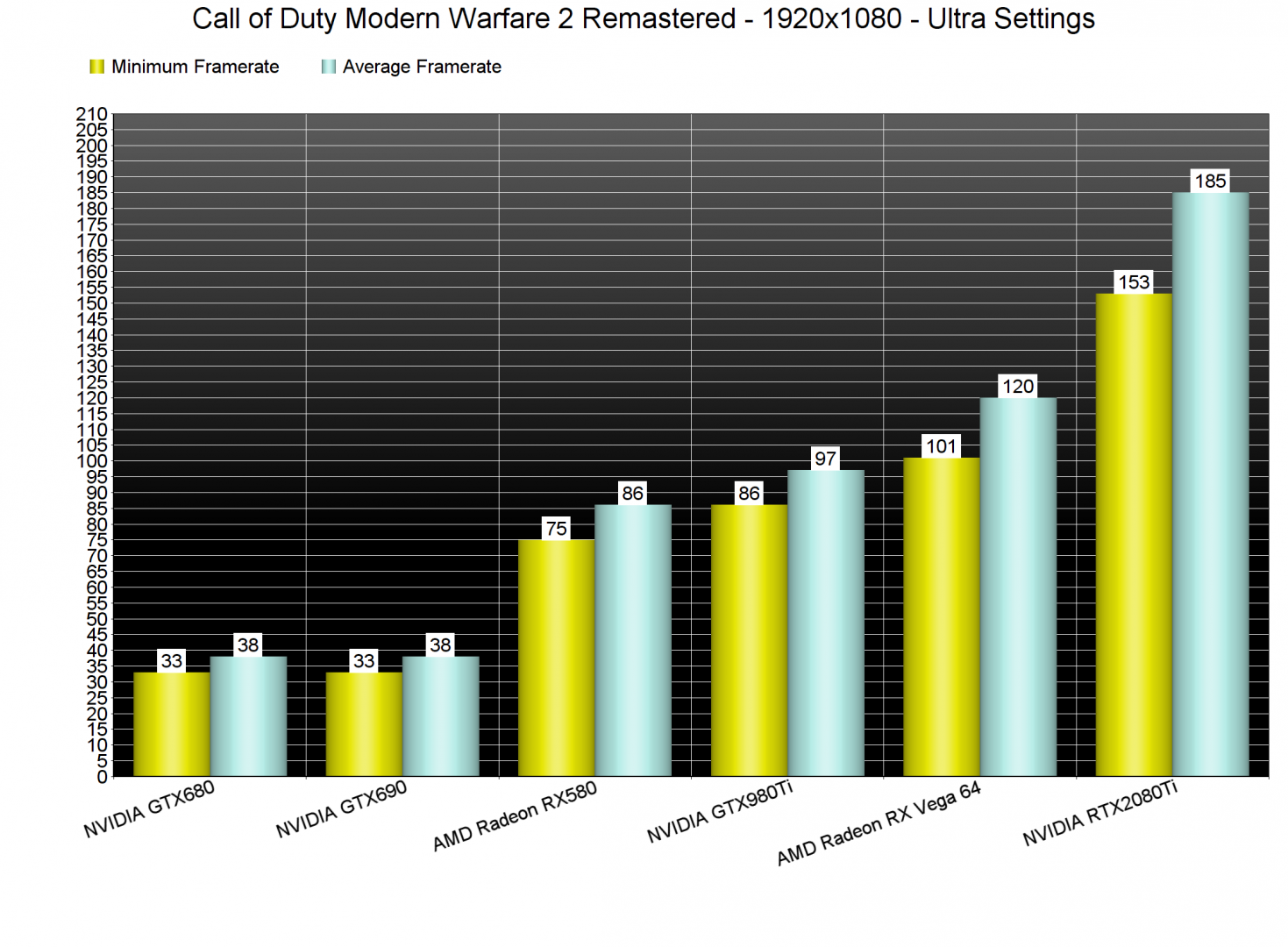 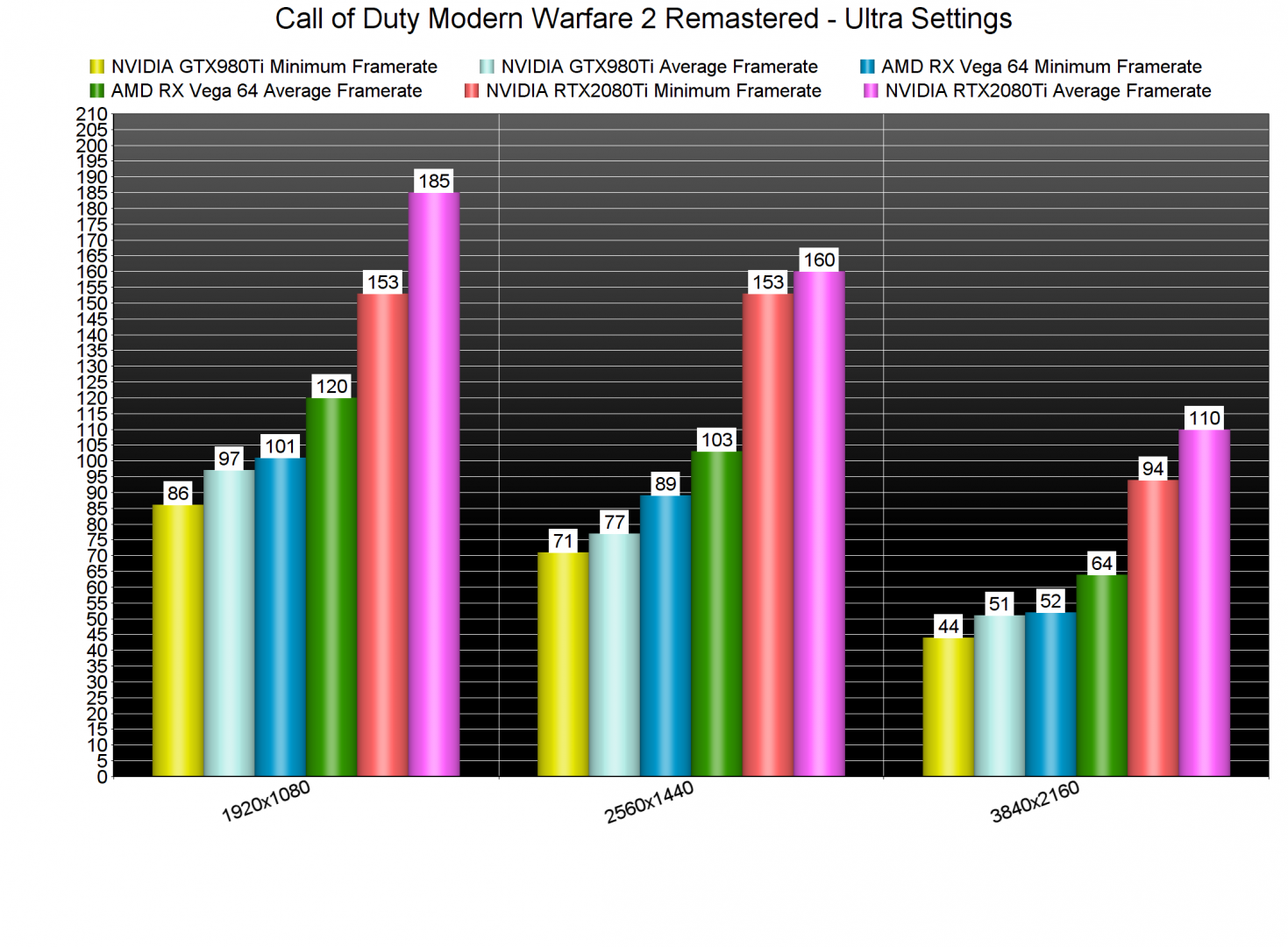 Graphics wise, Call of Duty Modern Warfare 2 Remastered looks amazing. Infinity Ward and Beenox have improved the game’s lighting system and most of its assets. The game looks great even by today’s standards, so kudos to the teams for overhauling it. In short, this isn’t a simple remaster, and feels more like a proper remake.

In conclusion, Call of Duty Modern Warfare 2 Remastered looks and performs great on the PC platform. The game looks significantly better than its original version. Moreover, it can run smoothly on a wide range of PC configurations. We also did not experience any mouse smoothing or acceleration issues, and there are proper K&M on-screen prompts. Not only that, Beenox has added a FOV slider; something that the remaster of the first Modern Warfare was lacking.