Remember yesterday’s teaser? Well, it appears that it wasn’t either Prey 2 or Doom 4. Bethesda Softworks today announced a new title, Wolfenstein: The New Order, an action-adventure shooter slated for release in Q4 2013. The game is being developed by MachineGames, a studio comprised of seasoned developers known for creating compelling, critically-acclaimed story-driven games.

Wolfenstein has been widely credited for helping establish and popularise the first-person shooter genre, and Wolfenstein: The New Order is a reimagining of this franchise – offering players a gripping and dramatic experience. The official announcement trailer can be seen today at GameSpot.

Wolfenstein: The New Order is scheduled for release on X360, PS3, PC, and next generation consoles. Additional details about the game will be revealed in a series of exclusive feature stories with GameSpot beginning on Wednesday, May 8th.

“We are excited to bring a new chapter of Wolfenstein to gamers everywhere. As fans of the series, working on this game is an honor, and our team is driven to create an unforgettable action-adventure experience that will make FPS fans proud.”

Our reader Sid Spyker has provided us with the first screenshots and artworks for this new Wolfenstein title! 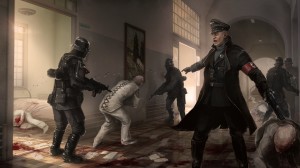