Intel’s Lakefield processors have been in the market for quite some time. These are industry’s first products with Intel’s Foveros 3D stacking and a hybrid computing architecture. Leveraging Intel’s 10nm process technology and Tremont cores, Lakefield achieves a dramatic reduction in package area over previous generations of technology, offering OEMs more flexibility for thin-and-light form factor PCs while delivering uncompromised Windows 10 experience.

They offer a combination of one strong Sunny Cove (SNC) core and four weaker Tremont (TNT) cores (in a single five core processor package). Since 2011, ARM has been offering a similar big.LITTLE configuration for Smartphone processors, and they have been successful in the market as well.

Now, Golem.de has published a review of the Intel Core i5-L16G7 Lakefield Hybrid processor (found inside the Samsung Galaxy S notebook) which provides an in-depth look at this new processor design. The Lakefield i5-L16G7 combines a high-performance ‘Sunny Cove CPU’ core with four smaller ‘Tremont’ cores, and Gen11 iGPU, but the operating system/OS should count on such a configuration so that there is no performance wastage.

The recent test performed by ‘Golem.de’ indicates that Windows 10 OS ‘Process Scheduler’ is really ready for Lakefield’s hybrid multi-core topology design; so that it can distinguish workloads and the right kind of core is used at any given time. According to the testing done, it appears that the Sunny Cove SNC kernel is called, for example, when launching applications or opening new web browser tabs, media encoding, or, of course, under load, such that it is not or cannot be parallelized, and also when vast serial processing loads are in demand.

The smaller Tremont TNT cores on the other hand are used in highly parallelized workloads , and for normal operation of undemanding tasks, but also in the case of more demanding ones, which can use all these cores at once (for rendering, video coding), because together they will be significantly better than one Sunny Cove (SNC) core.

It should be noted that the Core i5-L16G7 processor has an SDP (Scenario Driven Power) of 7 W, while the value of PL1 at load is also 7 W, the PL2 at maximum load is actually 9.5 W, which applies for a TAU value of 28 seconds. However, this ultimately depends on the specific implementation of the processor in a particular laptop Model, where the PL2 may be just 7 W. In the testing done by Golem.de, the Lakefield and its SNC core worked under load mostly at 2.5 GHz clock speed, and occasionally it was hitting 2.9 GHz as well.

Golem’s testing observed that the ‘Sunny Cove’ core kicks in during interactive workloads that require some burst performance from the CPU, with the core typically clocked at 2.50 GHz in load, and occasionally hitting 2.90 GHz. The smaller ‘Tremont’ cores on the other hand were typically clocked at 1.90 GHz during workloads, and can boost up to 2.70 GHz, depending on the application.

The test results show that the process scheduler in Windows 10 is aware of Lakefield’s special architecture and does not use all the five cores equally, at the same time. This is important because future next-gen ‘Alder Lake-S’ lineup of desktop processors are also going to utilize a similar hybrid technology/topology.

Golem tested the Core i5-L16G7 processor in 25 different test scenarios, comparing it with the i7-1065G7 Ice Lake 15 W SKU, an i5-10210U Comet Lake-U 15 W processor, and a Pentium Silver N5000 SoC which only rocks Tremont cores. When the power limit was raised the performance of the i5-L16G7 CPU jumped by 40-60%. Future client-segment architecture such as the ‘Meteor Lake’ (built on 7 nm silicon fabrication process node) will combine even larger hybrid CPU core arrays to achieve high core counts. To sum this up, the Intel’s hybrid topology architecture does look promising. 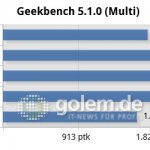 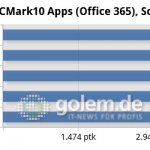 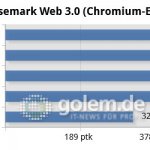 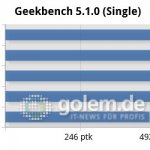 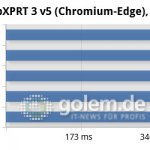