According to a recent report, the European Commission has fined Valve and five other major game publishers a combined of €7.8 million ($9.4 million) for breaching EU antitrust rules.

The fines have been levied against Valve, Bandai Namco, Capcom, Focus Home, Koch Media, and ZeniMax. All five publishers and Valve were found to have being engaged in “geo-blocking practices” by restricting cross-border sales of certain PC titles based on where players were living within the European Economic Area (EEA).

The geo-blocking practices investigated since 2017 concerned around 100 PC video games of different genres, including sports, simulation and action games. As per the Commission’s report the companies geo-blocked around 100 PC games, preventing them from being activated and played outside certain EU countries. This broke the EU’s Digital Single Market rules.

The European Commission says the geo-blocking was to prevent games from being activated outside Czechia, Poland, Hungary, Romania, Slovakia, Estonia, Latvia and Lithuania.

“Valve and the publishers restricted cross-border sales of certain PC video games on the basis of the geographical location of users within the European Economic Area (‘EEA’), entering into the so called ‘geo-blocking’ practices,” the European Commission said.

“Today’s sanctions against the “geo-blocking” practices of Valve and five PC video game publishers serve as a reminder that under EU competition law, companies are prohibited from contractually restricting cross-border sales. Such practices deprive European consumers of the benefits of the EU Digital Single Market and of the opportunity to shop around for the most suitable offer in the EU.”

Simply put, the commission claims the six companies deprived PC gamers of the benefits of the EU Digital Single Market and the opportunity to shop around for the best deals in the EU.

The breakdown of the fines imposed on the publishers is as follows: 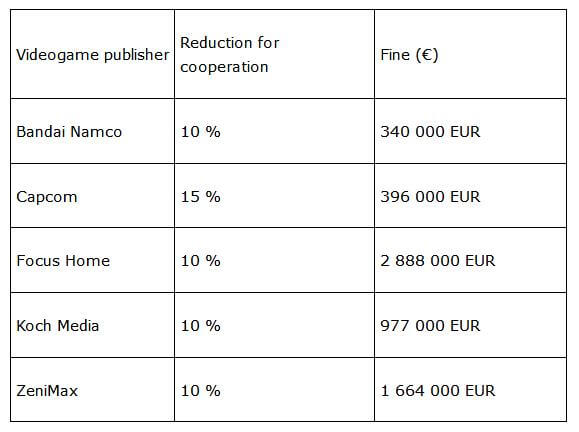 “More than 50% of all Europeans play video games. The videogame industry in Europe is thriving and it is now worth over € 17 billion. Today’s sanctions against the “geo-blocking” practices of Valve and five PC video game publishers serve as a reminder that under EU competition law, companies are prohibited from contractually restricting cross-border sales.

Such practices deprive European consumers of the benefits of the EU Digital Single Market and of the opportunity to shop around for the most suitable offer in the EU”.

The European Commission continues on to explain:

“Bilateral agreements and/or concerted practices between Valve and each of the five PC video game publisher implemented by means of geo-blocked Steam activation keys which prevented the activation of certain of these publishers’ PC video games outside Czechia, Poland, Hungary, Romania, Slovakia, Estonia, Latvia and Lithuania, in response to unsolicited consumer requests (so-called “passive sales”).

These lasted between one and five years and were implemented, depending on the cases, between September 2010 and October 2015.

Geo-blocking practices in the form of licensing and distribution agreements concluded bilaterally between four out of the five PC video game publishers (i.e. Bandai, Focus Home, Koch Media and ZeniMax) and some of their respective PC video games distributors in the EEA (other than Valve), containing clauses which restricted cross-border (passive) sales of the affected PC video games within the EEA, including the above-mentioned Central and Eastern European countries.

These lasted generally longer, i.e. between three and 11 years and were implemented, depending on each bilateral relationship, between March 2007 and November 2018.” 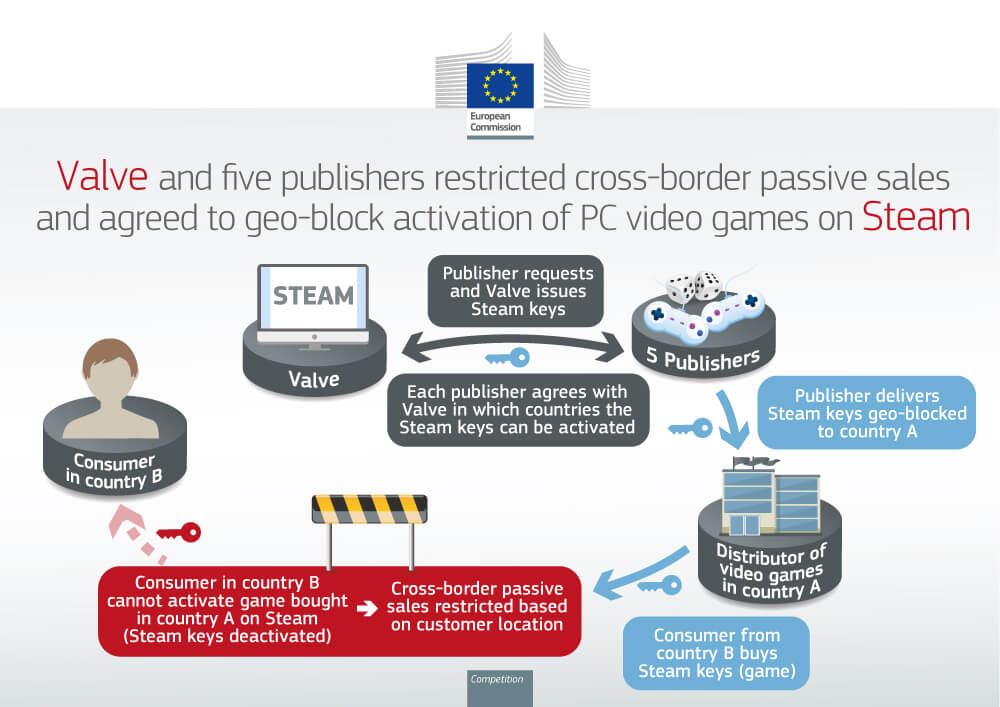 This may not be the end of the action for damages, as the Commission outlined, “any person or company affected by anti-competitive behaviour as described in this case may bring the matter before the courts of the Member States and seek damages.”

These fines might initially appear small, but it’s a step in the right direction to curtail these companies’ anti-consumer actions.

Basically, for example some countries like Romania usually see a reduced price for a PC game, which means that interested users from France could then save money by purchasing a key from a Romanian outlet instead, and simply activate it on Steam afterwards.