Yesterday, Epic Games unveiled Unreal Engine 4 running on PS4. It was amazing witnessing such an engine running on Sony’s next-generation platform but something felt off. Something felt different from what we remember seeing on the PC. And it appears we’re right as both NeoGAF and Reddit users have been spotting various differences between these two versions of the Elemental Tech Demo. Fact is that Elemental on PC looked more impressive and more beautiful than its console counterpart. But let’s take a look on a comparison between these two versions, shall we?

Here are some grabs from the Elemental Tech Demo, running on the PC and on PS4. We should note that the top images are from the PC version, while the bottom ones are from PS4. 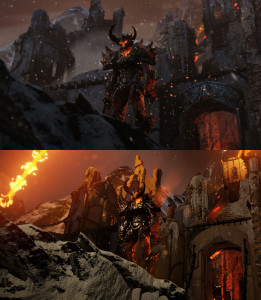 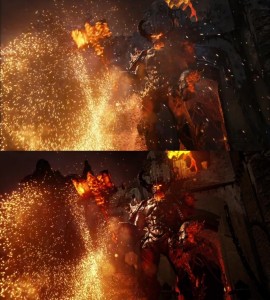 Lighting also seems to be better on the PC. Not only that, but pay attention to the Knights eyes. On the PC version, you can clearly see that his eyes are ‘burning’. That effect though is nowhere to be found on the PS4 version. Due to the lack of such feature, the Knight on the PS4 does not look as frightening as the one on the PC. As Reddit’s user ‘ForHomeUseOnly’ also notes, ‘there isn’t a shadowed area in the corner wall area by the door, and it looks like there isn’t any light bouncing going on, and missing shadowing in some areas.’

In addition specular highlights – or the shininess of the character – seem better on the PC. The PS4 version has very ‘plastic and blown out reflections‘. Furthermore, the Knight seems to be getting less indirect lighting on the PS4 version. As we can easily spot, there is some blue indirect lighting from the enviroment on the Knight’s armor on the PC tech demo, something that is missing on the PS4.

Textures also seem of a lower quality. This can be easily spotted on the Knight’s armor, the ice chunks and the door. Ah yes, the door looks really awful on the PS4 version of the Elemental demo. The PS4 version also lacks the DOF effect that was present on the PC version, though some might be glad that Epic Games did not use it. Smoke effects are also decreased to a minimum, something that can be easily spotted in the second comparison shot.

You can easily tell that the PS4 version is basically a downgrade from the PC version of Elemental. As a means of proof, we’ve included both tech demos below. We should also note that Elemental was running on a single GTX680 on the PC. We also know that Elemental was running at 1080p and 60fps on the PC. Epic Games has not revealed the resolution and the framerate of the PS4 version, though we expect it to be at 1080p and 30fps.