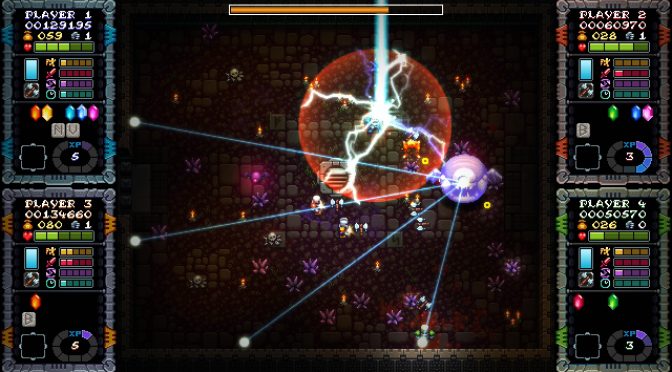 Tikipod has announced that its twin-stick arcade shooter, IRON CRYPTICLE, will be released on July 12th. In order to celebrate this announcement, Tikipod released a new trailer for IRON CRYPTICLE that can be viewed below.

IRON CRYPTICLE is an arcade twin-stick dungeon shooter with RPG elements. The game is structured around the core of Smash TV / Robotron, deepened by an item collection system inspired by Bubble Bobble / Rainbow Islands, all placed in a Ghosts and Goblins / Gauntlet type medieval setting.

In IRON CRYPTICLE, players can upgrade their skills (Speed, Damage, Fire Rate and Weapon Duration) either from shops or through chaining of food pickups. Most enemies drop a food item with which players need to juggle chain-collecting, all whilst slashing their way through hordes of ghastly creatures.

In IRON CRYPTICLE, each floor made up of a branching system of rooms, and each room type has their advantages and disadvantages.

Players will also be able to unlock a range of weapons, magical scrolls and items, and the game will support solo or up to 4 player local co-op.