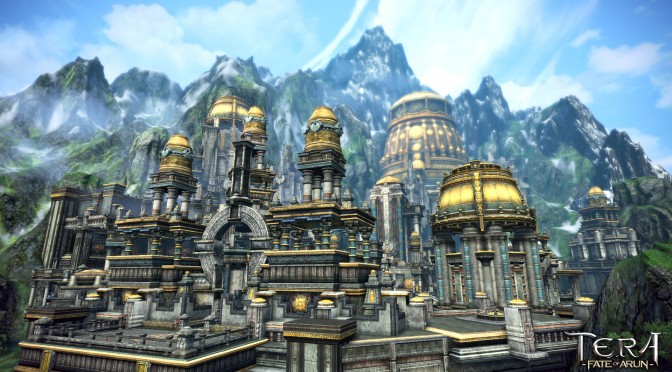 Gameforge announced today the release of Tera: Fate of Arun in Europe. Developed by Bluehole, this update carries adventurers into Northern Arun, whether they are put to the test in four new zones with challenging quests and a new style arena.

Fate of Arun introduces a new style of competition between players. In the Monkeydrome, two teams of three players face off against streaming hordes of monsters and attempt to outdo their opponents. Points are earned depending on the size and number of defeated enemies – from nigh-on defenceless cannon fodder right up to TERA’s hefty BAMs (Big Ass Monsters). Teams compete over three rounds, but to add an extra layer of strategy, they can spend the points earned during each round on special boosts for their own team or extra hurdles for their opponents: strengthening attacks, adding extra waves of monsters or – especially mean – a spell which intermittently stuns the opposing team for a few seconds.

As mentioned, this update adds four new zones – Savage Reach, Spring Valley, Arx Umbra and Ex Prima. These new zones are populated with old friends and new enemies, who will accompany the players on their way to the new increased maximum level 65. A variety of new skills are available for every class along the way. Certain mechanics will also see an overhaul in this expansion.

Thanks to the Unreal 3 Engine the diverse landscapes of the new areas captivate the imagination with their fantastic visuals. On their journey through the unexplored territories, players will discover the homeland of the ancient Baraka and fight for the freedom of this wise people, oppressed and enslaved by the Archdevas.

New instances, such as the Sabex Armory or the Macellarius Catacombs, fit seamlessly into the story and are well suited for the players to use for levelling up. They already become available at levels 61 to 64. The dungeons Ravenous Gorge and Bathysmal Rise represent endgame content that will present even more experienced player groups with a real challenge. In every battle, heroes will have to cope with surprising fighting techniques and puzzles which can only be mastered as a team.

The update’s key features are: