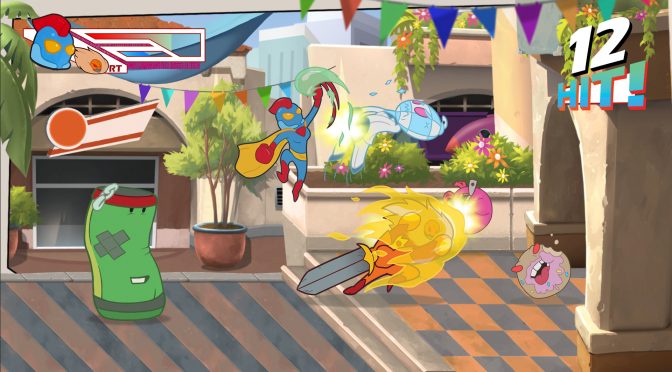 Sumo Digital announced today that Pass The Punch, its own-IP 2D beat ‘em up, is coming to the PC in late 2019. Pass the Punch is set in a world influenced by 80s and 90s Saturday morning cartoons, and below you can find its first screenshots.

Pass The Punch follows the story of Rush, a resident of New Atlas, as she fights the dastardly villains King Crab and Red Velvet. These villains are hell-bent turning Rush’s favourite hangouts into lifeless, corporate franchises, and it will be up to you to save the day.

As the press release reads, the residents of New Atlas can transform into powerful beings with abilities based on their everyday lives. Rush, for example, is a gym owner who transforms into a lightspeed boxing champion. On the other hand, her buddy Claud is a LARPer whose foam sword grants the ability to turn into a badass berserker.

Players can choose to fight as Rush, Claud, Beetle or Wizard. Furthermore, the game will support both solo (with an AI sidekick) and two-player local co-op modes.

“Pass The Punch started off as my submission to a Sumo game jam. It calls back to some of my favourite beat ‘em ups, fighting games and animated series. I’m thrilled that Sumo decided to make it into a full game!”

“We have an enormous amount of creative talent in each of our seven studios and encourage every member of staff to take part in our game jams. David’s submission stood out for its ‘easy to learn, hard to master’ gameplay and follows in the footsteps of Snake Pass as a game jam concept that became a published product. It’s exciting and rewarding to see our teams’ imaginations deliver unique IP like this!”