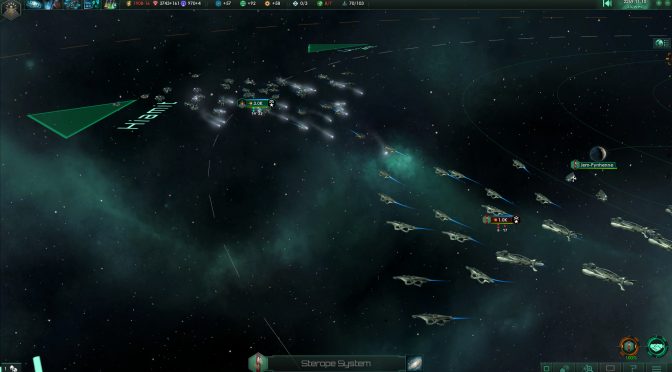 Paradox Interactive announced today that the launch of Stellaris was received to almost universal acclaim by the community, with an impressive 95% positive user reviews on Steam. In addition, with 68,000 simultaneous players on the day of release, Stellaris managed to de-throne the publisher’s other recent success Cities: Skylines, which previously held their record for highest amount of concurrent players at launch.

Less than 24 hours after release, Stellaris has sold over 200,000 units, breaking the revenue record for any of Paradox Interactive’s previous titles during the same time period. For the internal development studio, the game has broken every record available and is the studio’s fastest selling game ever.

“We are immensely proud of the Paradox team for putting together such a stellar release. This release is the result of hard work and dedication from the entire company and in particular Paradox Development Studio. The incredible reception by players, indicated for instance by the steam user reviews, is all the proof we could ask for that our hard work paid off. Our fans have put their faith in us and Stellaris will be a part of Paradox’s onwards journey for a long time to come.”

”Stellaris breaks a lot of new ground for Paradox Development Studio. It is a type of game we have never attempted to do before, and we are immensely satisfied to see this leap of faith work out well, especially with all the positive response we are getting from the players. We are listening very keenly to all the feedback we are getting and look forward to many years of continued expansions and improvements to the game. Let’s make space great again, together!”

In Stellaris, players guide a species of their own design to power and glory in the depths of space. From humble beginnings, as players leave their home planet and explore the unknown, to tense “first contact” moments with alien species, to the difficult choices and responsibilities of managing diplomatic relationships with other star-faring races, Stellaris presents the iconic gameplay of a Paradox grand strategy title on a galactic scale. With randomly created opponents and procedurally generated star systems, no two games can ever play out the same way.