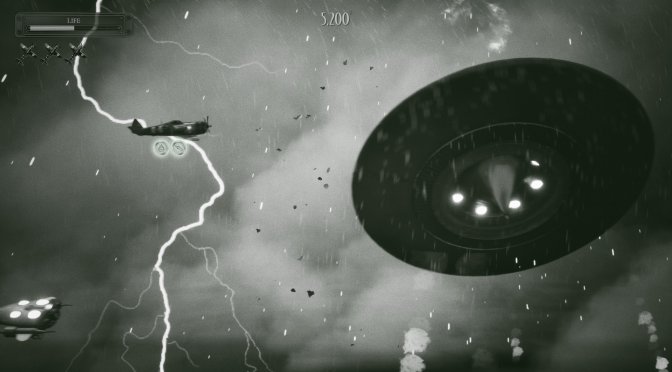 WhisperGames has announced a new sci-fi shoot ’em up game, Squadron 51. Squadron 51 will have cinematographic references in gameplay and stylized full-motion video cinematics, and you can find its debut trailer below.

According to the publisher, Squadron 51 is a dynamic spaceship shooter with 2D gameplay combined with a 3D environment, all in glorious black and white. The game’s aesthetics will also refer to the cinema of the 1950s.

In Squadron 51 players will have to beat 11 different levels, featuring hundreds of enemy ships and demanding bosses. The fights will take place in various scenarios; from snowy mountain peaks and forests to city skyscrapers. The game will support a local cooperation mode, with the second player able to join the game at any time. Players will also earn points that allow them to unlock new weapons and special upgrades for their fighter planes.

Every stage of the game will have live-action cutscenes shot by a professional film crew with a real human and alien actors. Moreover, the final version of Squadron 51 will feature over 50 cutscenes.