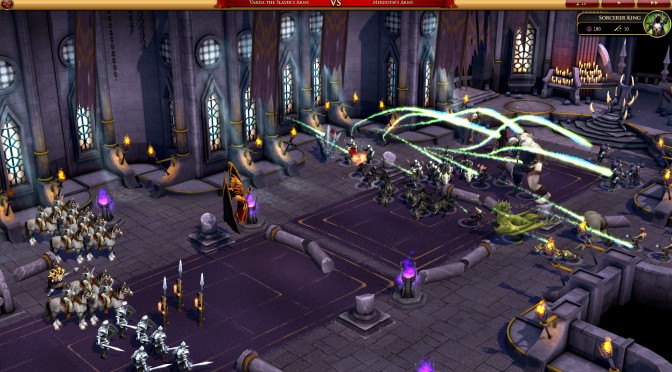 Stardock today announced that Sorcerer King is available now via its official website and Steam. Sorcerer King is a new fantasy 4X fantasy game where players must build a kingdom and raise a force powerful enough to challenge the Sorcerer King who’s all but destroyed their world.

As its press release reads, you are the leader of the city state of Athica.

“Dark times have fallen on your realm as the powerful mage called the Sorcerer King has already conquered the land. You had established an uneasy peace with him until you learned of his plan to become a god by destroying the Elemental Shards that supply the world with its magic. He must be stopped.”

“With Sorcerer King we wanted to do a different take on 4X fantasy and move away from some of the genre’s familiar tropes. Instead of pitting players against other factions with the same objective of conquering the game’s world for themselves, we’re challenging players to struggle against the Doomsday Counter as they rise from the ashes of defeat to stop the demigod from casting a spell that will transform him into a god.”

Players can challenge Sorcerer King and its ever ticking Doomsday Counter with the game’s six unique sovereigns that have their own skill trees, spellbooks and units.

In Sorcerer King the landscape is filled with hundreds of quests. Completing them grants you crafting components, lore for researching new spells, new units, magical artifacts, and can even increase or decrease the Doomsday Counter.

Along the way players will also encounter rivals that they may either choose to make into allies who support their cause or make them enemies that must be dealt with in addition stopping the Sorcerer King.