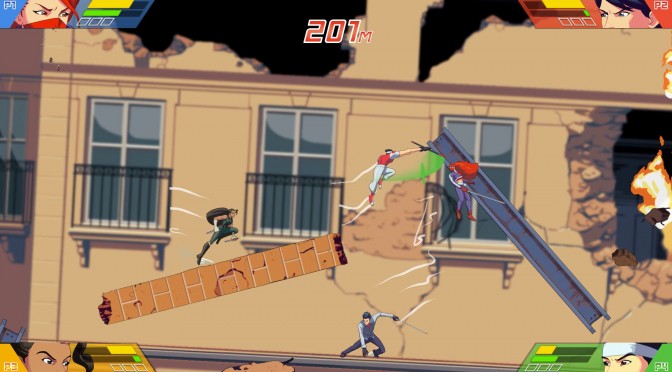 Ground Shatter announced today that its brawler / platformer hybrid SkyScrappers releases later today on Steam at the price £9.99/$12.99/€12.99 (with a 10% launch week discount).

In the game, players take on the role of one of four extreme sportspeople who get their kicks from racing to the tops of building as they are being demolished.

“Players run, jump, and fight their way across falling girders, rubble, and furniture as they aim to be the first to reach the roof… or the last one standing.”

Inspired by classic coin-on games, SkyScrappers has been described as a perfect “playlist game” – the sort of game that you play when you have friends around for a local multiplayer session – and it will nestle perfectly in your library amongst the likes of Lethal League, Towerfall, and Nidhogg.

As well as the core multiplayer experience, the game also features a single-player story mode, AI bots for multiplayer skirmishes, and an options screen (the rule-of-three is hard sometimes).