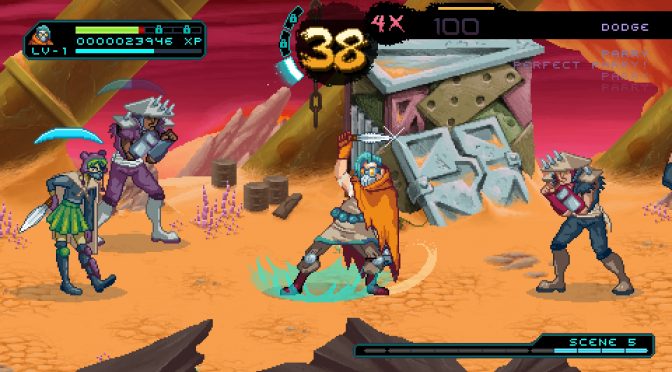 Household Games has announced that its side-scrolling action arcade brawler, Way of the Passive Fist, will be released on Steam on March 6th. In Way of the Passive Fist, players take on the role of the mysterious Wanderer and master a rare defensive fighting style to outsmart and outlast their enemies. While utilizing parries, deflections, dashes, and dodges, the Wanderer’s foes exhaust themselves to the point that they can then be defeated and knocked out by a single finger “punch” or push.

During the game’s development, the team applied a forward-thinking approach to accessibility, to shake up the traditional brawler game mechanics and give players a fresh take on the brawler genre. Players will be able to fully remap the control scheme to play one-handed, modify the game settings if they’re visually impaired or sensitive to sudden flashing lights, as well as customize gameplay difficulty settings to fit their play-style.

“We’re extremely excited to ‘unlock an indie studio achievement’ and to launch our first title, Way of the Passive Fist! It’s been such an awesome adventure and humbling experience for our small, yet ambitious, team. We hope that players, especially fans of classic 90s arcade brawlers or fighting games, are quick to notice two distinctive characteristics in Way of the Passive Fist – this isn’t your typical action arcade brawler since button mashing won’t get you far and it’s all about timing defensive moves, as well as the unique accessibility features.”