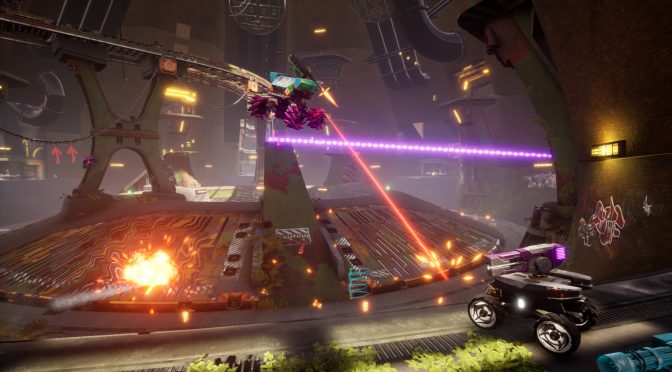 Green Man Gaming has announced the next game from the creators of the Carmageddon series, ShockRods. ShockRods is described as a 6v6 or 12 player free-for-all vehicle-based arena shooter, bringing all the blisteringly fast-paced action, mayhem and overpowered weapons you would expect from a Stainless game.

ShockRods will feature 4 stunning, highly varied environments, designed to allow players to exploit their vehicle’s manoeuvrability; with more to come as the game evolves through Early Access. These environments will range from natural looking desert and woodland areas, to man made battle arenas, specifically designed for 6v6 or free-for-all carnage and mayhem.

The game will sport 3 classic, tried and tested game modes: Death Match, Team Death Match and Capture The Flag. Furthermore, a full combat no-holds-barred Ball Mode will be featured in which players can work as a team and protect the ball carrier as they target the opposition goal, or simply reduce their opponents to scrap metal and walk the ball home.

ShockRods will also allow for full customisation of your hulking war machines. Players can change their car type, colour, wheels, decals and patterns, choose from a host of taunt FX and sounds, and much more. All the content is cosmetic and can be unlocked through currency earned in game based on your performance in battle.