We all know by now that Scalping has become one of the most frustrating things to happen lately, which in turn has affected and disrupted the whole PC hardware and the console gaming market as well. Scalpers had the opportunity to buy a product for the sole purpose of just making a profit off of it, and more specifically for selling it at a much higher price than the initial MSRP.

Due to the Covid-19 global pandemic, many customers, gamers, enthusiasts and others have been forced to stay indoors, work/play from home, and so because of this, the demand for the latest gaming and other hardware accessories has seen unprecedented growth recently.

Buying a new GPU, CPU, gaming console, or any other related hardware has been nearly impossible at least at the MSRP rate set by the companies, be it AMD, INTEL, NVIDIA, Microsoft, Sony, DELL and others.

Because of this global trend, recently one Data Engineer Michael Driscoll from DEV.TO decided to do an in-depth analysis to see just how much money these scalpers have made off recently. Driscoll wrote a script to scrape all of eBay’s sold listings, and graph them accordingly to get an insight into this whole scalping process.

His recent analysis focuses on the AMD Ryzen 5000 (codenames as Vermeer) processor lineup scalping situation. Although pricing has somewhat stabilized over the past few months or so, AMD’s Ryzen 5000 chips are still selling way over their MSRP value.

To first quickly summarize the results, scalpers have sold a total of 8,720 Zen 3 processors on eBay alone, which is equivalent to $5,880,472 in sales on Ebay. Moreover, the scalping process in return gave $946k in profit to scalpers and $625k to eBay/PayPal alone. These figures are no doubt staggering.

Going into more details, the AMD Ryzen 5 5600X was the most sought after GPU for scalping due to its lower pricing, and better price to performance ratio. As per Driscoll’s numbers, scalpers have sold up to a total of 3,204 units of the Ryzen 5 5600X SKU, which amounts to roughly a 36.7% ratio of the total number of sold processors on eBay.

According to analyst Michael Driscoll, Zen 3 pricing has overall stabilized well above the profitability cutoff for scalper, however, the Ryzen 5800X is still selling 25% above MSRP, the 5950X and 5900X are 40% more expensive, and the 5600X is selling 30% over MSRP with a slight downward trend.

Scalpers have recently chosen a new venue/outlet for selling these SKUs, which is StockX, which happens to be a very unusual marketplace to sell hardware, since StockX is mostly popular for stuff like watches, sneakers, streetwear and bags. But they also sell electronics.

Moreover, StockX only has a 3% selling charge fee, which makes it even more appealing than eBay which wants 13% of the profit. Scalpers have been reselling Ryzen 5000 processors on StockX at lower prices due to the smaller fee. If we compare both these marketplaces, the average selling price for the Ryzen 9 5900X on StockX is $758, while the same processor on eBay is sold for $800 (median pricing).

Lastly, Driscoll also discovered that the Zen+ and Zen 2 series of processors have also increased in price by approximately 33% and 25%, respectively. The real outliers are the Ryzen 3 3100 and 3300X, which jumped closer to 45% of their previous price.

He suspects this is due to buyers having their whole system ready to build except for the CPU, and just buying something to tide themselves over until they could get the Zen 3 CPU they desire. So basically these older gen Ryzen processors have been acting as a stopgap solution for the time being.

Original Zen CPU prices don’t seem to be affected though. 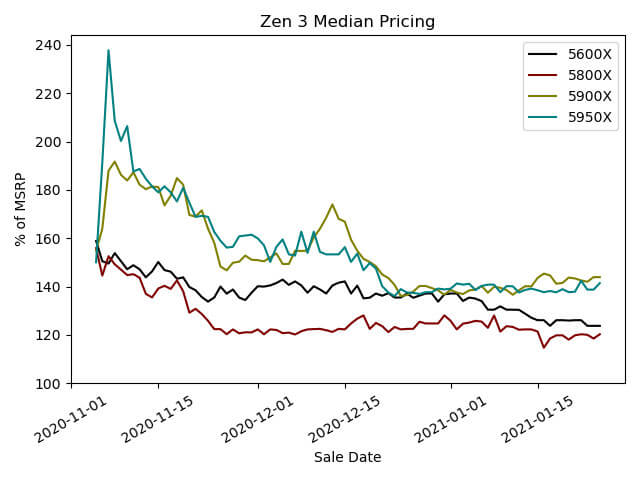 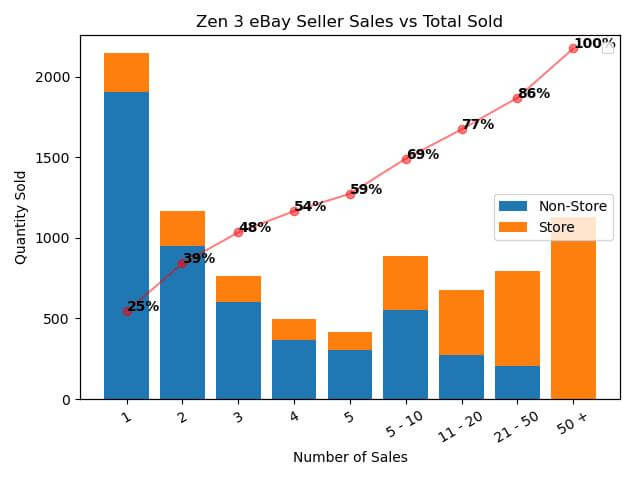 Scalping actually works based on the economy’s supply and demand ratio; and when the supply is low and demand is too high, scalpers can make huge profits, and take undue advantage of this market trend.

Michael Driscoll’s graphs aren’t based on actual prices, but rather on percentages, with each product’s MSRP being taken as the baseline. This makes reading these graphs and charts a bit easier.