A ChipHell forum user has recently posted a screenshot which appears to be taken from an insider account, and it provides us with some info on the expected pricing of the upcoming flagship RTX 3090 GPU.

The user has shared some details of a custom AIB RTX 3090 GPU from the COLORFUL brand, along with the estimated price. It seems Colorful is releasing two custom high-end variants of the RTX 3090 Ampere GPU; one is the Vulcan Model which is air cooled, and the other one is a Neptune SKU featuring a hybrid water cooling solution.

My guess is that the RTX 3090 GPU will replace the TITAN branding and these might target professionals, content creators, and developers alike. The RTX 3090 shouldn’t be considered as a normal gaming GPU. Nonetheless, you should treat this whole article as a rumor, and take it with a grain of salt. But we expect the RTX 3090 to be the next TITAN GPU.

The colorful RTX30 series flagship — VulcanX and Netpune upgrade details were exposed by the Northeast District General Generation. The voice burst in the post bar shows that this generation of colorful Vulcan Water God has been improved in these points where it is visible: 1.Fire God: the graphics card screen is larger and more beautiful than the previous generation; 2.Vulcan: heat dissipation performance is greatly improved, and the frequency is the highest in the 30 series flagship; 3.Vulcan: supports two-way lighting effects, and the graphics card comes with a 5V interface, That is, the motherboard can synchronize the lighting effects of the graphics card, and can also output the lighting effects of the graphics card to the motherboard; 4. Water God: The heat dissipation scheme is fully replaced, and the temperature will be very beautiful. Regarding the price: The purchase price of Vulcan is 12,000, and the purchase price of Water God is not mentioned, and the purchase price may be a little lower. Vulcan and Water God will have the same pricing at the beginning of the listing, but the Water God will reduce the price in the later period, because the 20-series Water God has never made money and is making up for it with the income of Vulcan. Lao Huang expects:
• RTX3090 VulcanX OC is priced at 13,999 offline, JD | 15999; •RTX3090 Neptune is priced at 12999 offline, JD is 14,999. #Computerdiy#
www.chiphell.com” 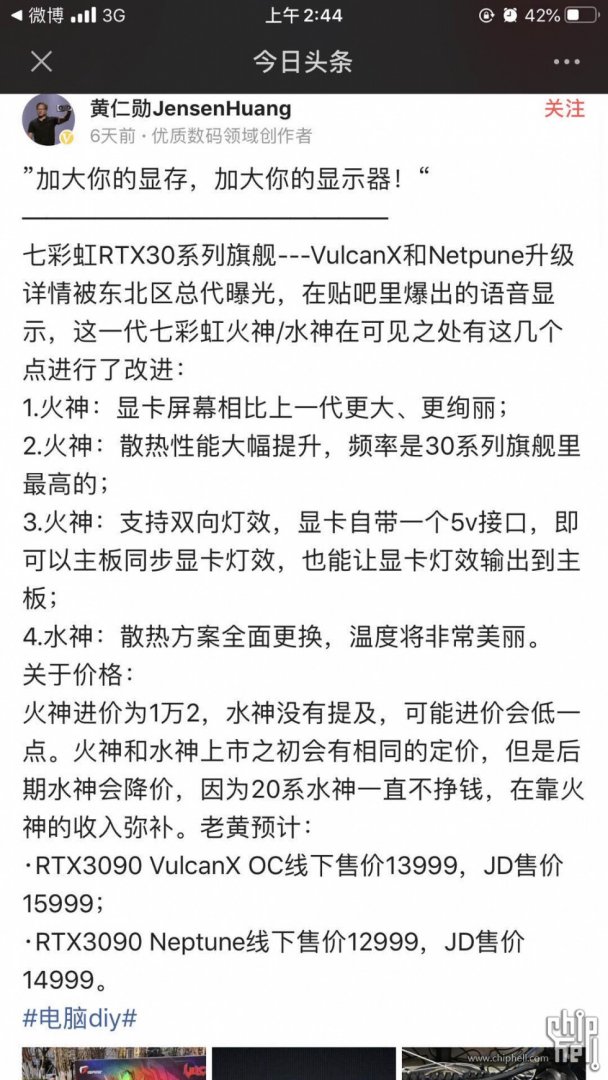