AMD is going to officially reveal its next-gen RDNA 2-based Big Navi GPUs on October 28th. The company did reveal that it will announce the RX 6000-series lineup.

Navi 21 SKU has been codenamed as ‘Sienna Cichlid’, whereas the ‘Navy Flounder’ codename could refer to either Navi 23 or 22. The higher the Navi suffix the lower the GPU will be positioned in the hierarchy, which means Navi 22/23 will land up in entry-level and mainstream GPUs most likely.

Now, one Reddit user stblr has discovered that the recent ROCm update (ver 3.8), aka Radeon Open Compute Ecosystem, contains new firmware for the Navy Flounder GPU, including the gpu_info variable. There are certain variables which define the configuration of this graphics processor. 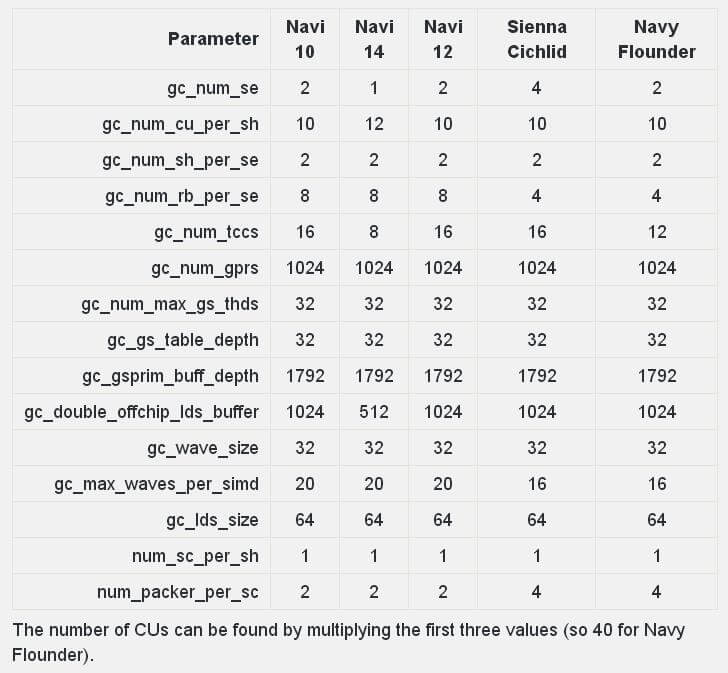 Even though not fully confirmed, but the Navi Flounder GPU will have 40 Compute Units/CUs, same as Navi 10 variant, and the memory bus width is rumored to be limited to 192-bit. The value gc_num_tccs, refers to the number of texture channel cache and is generally related to the memory bus width (so for Navy Flounder it would mean 192-bit). But there are some exceptions as well.

The number of CUs can be calculated by multiplying the first three values in the firmware data, so it is 40 for Navy Flounder. Now, assuming that each Compute Unit carries 64 Stream Processors, the Navy Flounder GPU variant would feature a total of 2560 unified cores. The Navi 22/23 graphics processor might directly compete with Nvidia’s rumored upcoming Ampere GA106-based GPU, which also sports 192-bit wide Memory bus interface.

Sienna Cichlid firmware can be found here, and the Navy Flounder firmware is listed here. Navy Flounder was also the newest AMD Navi 2 GPU to be added to the Linux Driver recently.

Lastly, we have also seen pictures of AMD’s Radeon RX 6000 RDNA2 GPU before, showing triple-fan and dual-fan designs. The triple fan variant would most probably be launched as the RX 6900 series, whereas the dual-fan model might house the RX 6800 or 6700 series family. The dual-fan version also features two 8-pin PCIe power connectors. It will be interesting to see whether the new RDNA 2 will be able to compete with NVIDIA’s high-end RTX 3090/3080, or its mid-tier brother, the RTX 3070.

AMD will officially reveal these new GPUs on October 28th. We expect the RX 6000 series to officially debut in November.

It appears that AMD has also added another support for NAVI 23 GPU in the Linux OpenGL driver, which is codenamed as “Dimgrey Cavefish”. We can easily figure the codename Navi 23 because AMD has provided the same hexadecimal range between ‘0x3C to 0x46’.

The latest entry in the RadeonSI Gallium3D open-source driver is for AMD Dimgrey Cavefish as well as VanGogh.
The Mesa 20.3-devel now has support for both ‘VanGogh’ and ‘Dimgrey Cavefish’ as well. So AMD might be planning to release 3 Navi variants, since all three RDNA2-based discrete GPUs have been added to the Linux driver simultaneously. VanGogh is a Mobile APU planned for release next year. We expect Navi 23 to land up in entry-level and mainstream GPUs.