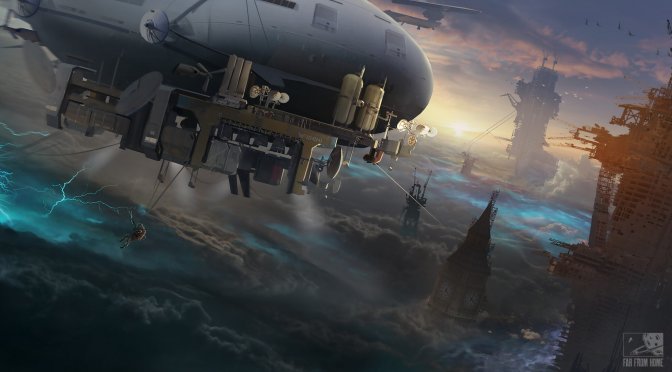 Far From Home has announced its debut game, Project Oxygen. In this game, players will embody a lone scientist. Players will explore an ecologically ruined and evolved Earth after humanity failed to fight off their own demise.

To allow for a deeper immersion in this unique world, the game will be in a first person perspective. Moreover, it will have strong survival game elements that will require players to regularly venture deep into the dangerous unknown.

Exploration, survival and success will be strongly tied to each player’s technologically advanced zeppelin air base that they will be able to pilot, upgrade and customize. This zeppelin will be the player’s main lifeline and refuge against the inhospitable world raging below and around them.A mobile air base that will act as their everything – transport, life support, storage, research laboratory, shelter and escape.

Project Oxygen will be using Unreal Engine and will release on next-gen platforms. That obviously means that it will come out on PC, PS5 and Xbox Series X. Do note that the game will be a single-player experience at launch. However, Far From Home plans to add a co-op mode at a later stage.

Far From Home is made up of former Techland and CD Projekt RED developers. These developers have worked on games like Dying Light, Dying Light 2, Dead Island, The Medium, Chernobylite and Divinity Original Sin 1 and 2.

With this collective wealth of experience and talent, the team are aiming to create games that revolve around mature topics, meaningful themes, while delivering a strong gameplay focus. The team will be also pushing to create high caliber AA+ games.

Unfortunately, though, the team has not revealed any in-engine screenshots for Project Oxygen.

Lastly, Far From Home plans to release this new first-person survival game in 2021.