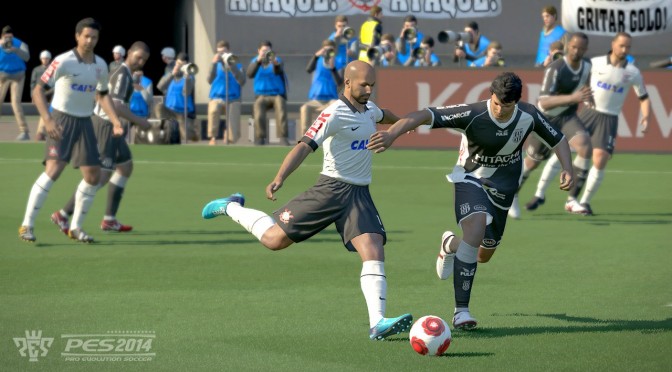 Konami has released details on the latest content update for its heralded soccer title – Pro Evolution Soccer 2014. The free Data Pack will be available later this month (February) for PC, X360 and PS3, and adds a wide range of new elements to the game. All transfers made during the 2014 January window will be implemented, while a host of new kits, balls, and boot styles have also been added.

The new download adds a number of new kits to the game. PES 2014 pays tribute to a selection of great classic teams including replica kits of the AC Milan side of 1899, the 1982/83 Roma side, Benfica’s all-conquering 1961/62 XI and Manchester United’s treble-winning 1998/99 strip. Contemporary teams have also been updated, with the new French, German and Spanish nationals strip updated, alongside those of AS Roma, FC Porto, Olympiakos and Club Atlético All Boys.

Classic strips for Santos FC (1968), Colo-Colo (1992), São Paulo (1993), Boca Juniors (1997), Racing Club Avellaneda (1967) and the 1996 Universidad De Chile side will also be included. Moreover, third kits for the current Manchester United, Juventus and Inter Milan sides have also been introduced. In total, 13 new kits have been added, and 43 updated.

New boots from the world’s leading manufacturers have also been recreated, including Nike’s Tiempo V and Hypervenom Phantom styles, Puma’s evoSPEED 1.2s and evoPOWER 1s, and the Predator LZ TRX FGs and F50 adizero TRX from adidas. 16 new boots have been added in total, as have five new ball styles, including the official Final Lisbon ball as seen in the UEFA Champions League knock-out stages, and the adidas argentum – the official ball of the Argentine leagues.

A new patch will be also released in conjunction with the Data Pack to tweak AI and gameplay elements and add a new camera to the 11 vs 11 mode in response to user feedback.

In addition to the Data Pack 3 release, a patch has also been released yesterday to resolve a small number of users who encountered power dropping during play. In addition to resolving the power issue, the patch also adds a new camera angle for PES 2014.