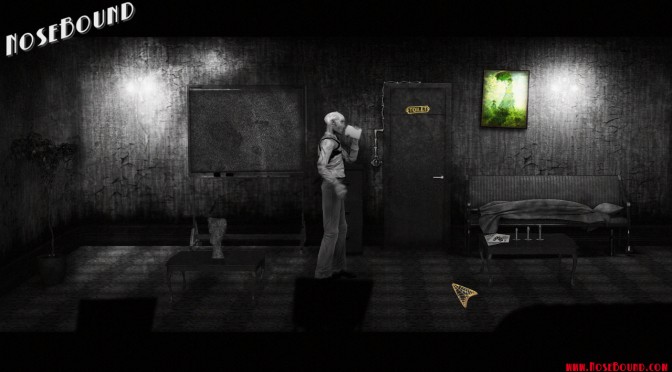 Quarantine Interactive has informed us about NoseBound; an old-school point & click adventure (for PC and Mac) that puts players in the shoes of Ray Hammond, an old private eye detective going head to head against a twisted organization. Quarantine Interactive has launched an IndieGoGo campaign for this title, and there is also a demo for you to try before pledging your support.

NoseBound’s gameplay is based on classic point & click mechanics; you’ll get to investigate several interactive areas with a tri-action menu using options such as “talk to”, “take / interact with”, and “look or investigate”.

NoseBound alternates third and first person perspective depending on what Ray Hammond doing: solving a puzzle, cracking a code or picking a lock.

Also, players will find themselves in gunplay situations at the end of each episode to emphasize drama.

The game is planned to be released in episodes; each one will contain one case, one story, always noir, always bizarre.

Episodes 1 and 2 share the same case, so they are both part of a same story. But episodes 3 and 4 are new and different cases.