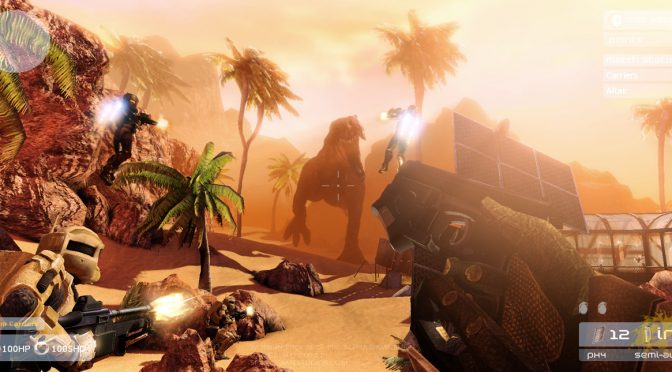 Developer David James has issued a new statement about the battle between Activision and Spiral Games regarding the unauthorised/illegal use of weapon art content from Call of Duty games. According to James, Spiral Games’ 3D artist did actually rip some content off the Call of Duty games, and a resolution has been reached.

“I am now in complete compliance with their complaint and I am equally as mad. While I don’t agree simply based on the evidence that you are all going on about, relating to our Auto Shotgun – I do see similarities in the sights/bolts, etc. I don’t believe it was important enough to remedy immediately, affecting production on all ends to simply replace that one weapon when we could just do it later on. We acted under the pretense this was the only infraction/issue. This was not the case. Regardless, I understand that was a unique perspective and that many in the community and even on the team agreed for it to go. In the end, it WAS removed from the game and will be made public in the upcoming Version 1.5.5.

Last night I received evidence directly from Activision regarding assets not even mentioned in public yet. Upon receiving this it became immediately apparent that blatant rips were made. While the artist offered to remake any assets at no cost, he has now been fired immediately upon learning this. This will slightly affect production and I will get into that later.”

James also tried to address some earlier reports about Spiral Games using content from other games:

“With this unfortunate event, a lot of the insane stuff of the past started to appear again and it’s not fair to those users involved as those events were not malicious as this one was, nor were the freelancers behind it. I’ve seen comments about Natural Selection, Primal Carnage, Counter-Strike and Achievement Images, all of which have been commented on in the past and only one I am directly responsible for.

@NATURAL SELECTION 2 ARMOR
This related to a development-only, pre-alpha game build. We were flying to conferences like Gamescom (Germany) and Eurogamer (London) to show to publishers and press. At the time, like any developer, you use whatever content and assets you have access to in order to mock up the experience. We had a freelancer at the time, Daniel Doerksen who was simply a fan of Unknown Worlds/Natural Selection – never officially worked for them and simply made himself personal portfolio piece based on their art. At this time we needed a unit exactly the same (a dispenser that grants ammo) and used what he had legally available to do so. It was caught in a few frames in a trailer and people (somehow) assumed it was straight from the Natural Selection 2 game, a title that wasn’t even released to the public at that time. The model was subbed out for the official release, as always intended.

@PRIMAL CARNAGE ARTWORK
Another incident involved a freelancing concept artist. Back in the day we had an additional folder on our shared Dropbox called “Mood Art”. This would contain anything that was either very “Orionish” or something I wanted to get added to the game and consisted of Orion-related fan art, things we’d find online. Said artist utilized a piece of artwork from that folder and used it as a base layer, proportionally, to do a full new drawing on top of. When submitted to me, I didn’t know this at the time. However Ashton, the former head of Primal contacted me right after we made the news post and we took it down immediately and apologized right then and I also personally apologized in person at a conference. They did not accept it. Fun fact, years later the two Dinosaur 3D Artists, Tim M and Eugen T, would join and create the Dinosaurs for both Prelude and most of Guardians of Orion.

@COUNTER-STRIKE AUDIO
Either stock or mod counter-strike audio was used in the game on accident and immediately removed. Can’t even remember what sound it was, I think the mp5.

@ACHIEVEMENT IMAGES
This is the one I am guilty of. We are a small team. We don’t have a dedicated Graphic Designer, Sound Designer or User Interface Artist. We want those spots filled, just haven’t found anyone proper to fill them. So when it comes time to do things like UI it’s just me and the Programmer and whatever we can hack/mock up. This is my ?????? image design, of which I used google images for things we were referencing, such as Turok. I understand looking back this was wrong and once it was brought up to us it was immediately removed. It actually worked out as the people who ended up doing the Achievement art found out about us from that situation. They make Race The Sun on Steam. They helped in a time of need, they are great workers and it’s a great game and you should support them.”

“1. We are removing ANY content that Activision finds offensive, immediately.
2. I am removing ALL DevHelmets from the game. This includes Fettuccine which we gave away to all users for free.
3. Other artists within the team have volunteered to remedy any assets required to restore the game to its quickest state as fast as possible.
4. We are shutting down social media. I don’t find the results from when it’s positive large enough, and when it gets bad it’s just horrible. We really need to bunker down to catch up on what was removed and we just want to focus on the game and will continue to do so and post updates/interactions to orion-project.net OR are YouTube which will remain operational”

All in all, Trek Industries aims to have ORION back on sale today/tomorrow as it has already issued a new update for the game that removes the content that was used from Activision’s games.