It appears that Videocardz has just managed to grab one official Nvidia press slide which shows the performance of the Green team’s new mainstream/mid-range RTX 3060 Ti Ampere GPU.

The official Nvidia press slide lacked details on the exact performance numbers/figures, but Videocardz has managed to give an estimate on the level of the performance we can expect from the RTX 3060 Ti, as evident from the chart/graph.

It appears that the GeForce RTX 3060 Ti is overall faster than both the previous-gen RTX 2060 SUPER and RTX 2080 SUPER GPUs in games and some synthetic benchmarks. This makes it a preferred GPU for a decent 1080p and even 1440p gaming.

The RTX 3060 Ti appears to be marginally ahead of the Turing based GeForce RTX 2080 SUPER, which is the GPU Nvidia is targeting. All the graphics cards were tested with stock clocks at 2560×1440 screen resolution on an Intel Core i9-10900K CPU platform.

The RTX 3060 Ti seems to have a 5.5% performance lead over the RTX 2080 SUPER, and an average of 43% performance uplift over the RTX 2060 SUPER in some of the AAA PC games that were tested. The benchmark results are actually divided into three categories: rasterizing, ray tracing, and rendering. 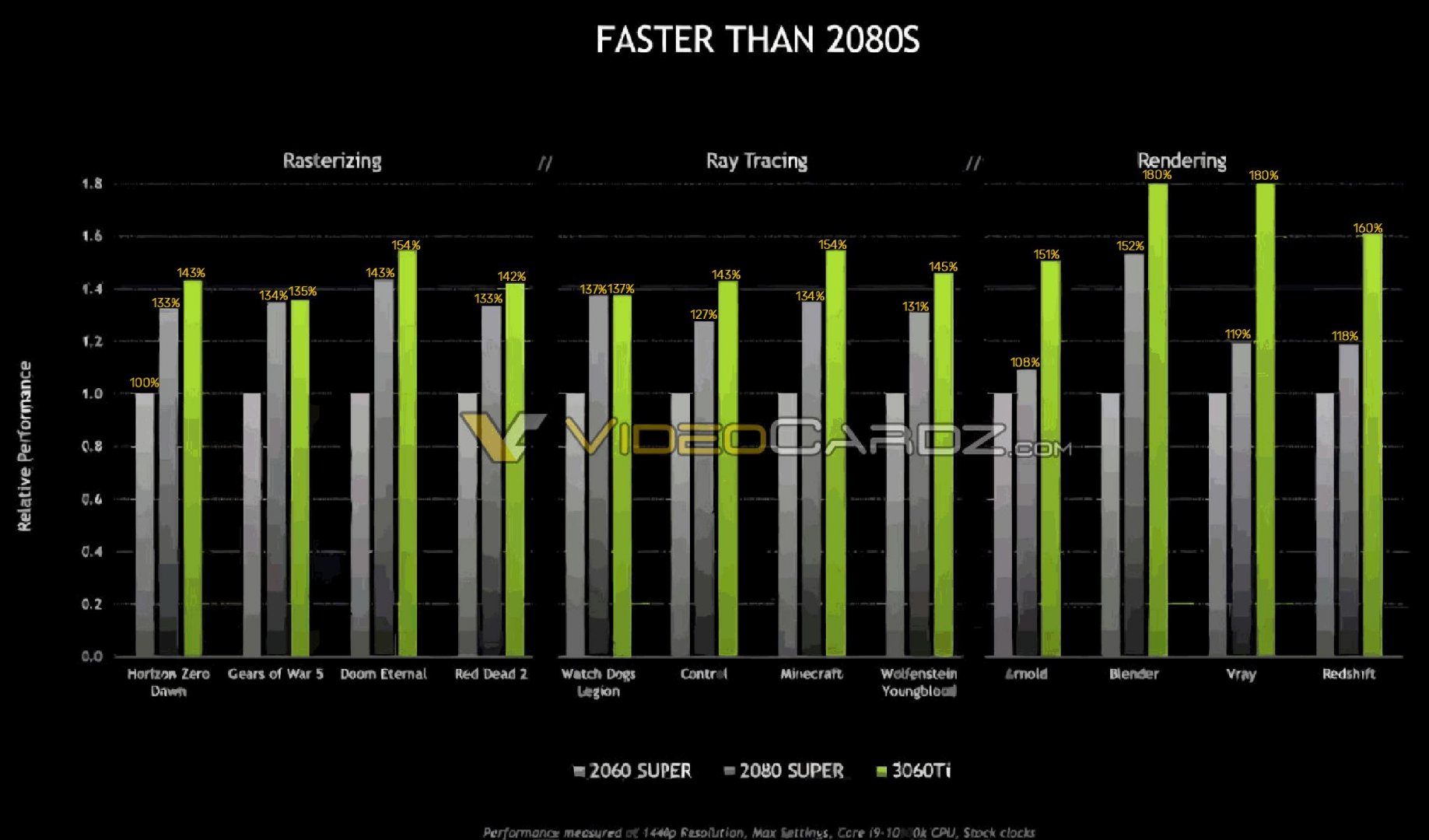 Ampere GPUs pack the 2nd Gen RT cores which really help boost the gaming performance. Like mentioned before, the RTX 3060 Ti packs less RT cores than the RTX 2080 SUPER but the GPU still ends up being faster.

According to Expreview, the new launch date of this RTX 3060 Ti GPU is scheduled for December 2nd, 2020. We also don’t know whether Nvidia is planning to release a Founders Edition variant of this GPU model. But we can surely expect to see several AIB custom Models for this card though.

Moreover, the card will have 152 Tensor Cores, and 38 RT Cores, respectively, and the power consumption or TDP is expected to be around 180-200 Watts.

According to some previous reports from AIBs, the RTX 3060 Ti GPU is going to see a similar stock issue at launch. Since this is a mid-range/mainstream card, the demand for this GPU is bound to be higher. Even though the launch date of the RTX 3070 was delayed by almost 2 weeks, the card was still sold out very soon, despite more stock.

This would also be the first time NVIDIA is bringing RTX support on its x050-series SKUs. The RTX 3060 is expected to launch around the first week of January 2021, while RTX 3050 Ti SKU is expected to hit retail shelves between January and February, next year 2021 that is.

It appears this time we won’t be getting any GTX-branded cards lacking hardware Ray Tracing/Tensor cores.

As per some reports, Nvidia also plans to release the RTX 3050 non-Ti variant as well. But no info on the GPU specifications or the release date has been shared yet. But we can expect Nvidia to target the low-end/entry-level and mid-range GPU market segment as well, like they have done in the past.

This all depends on how well AMD responds back with their low-end/mid-range/mainstream NAVI RX 6000-series lineup, which is based on the new and refined RDNA 2 GPU architecture.