It appears that NVIDIA’s upcoming RTX 3080 Ti flagship GPU entry has been spotted in an OEM driver courtesy of StefanG3D from Laptopvideo2go forums, with the GPU device ID being listed as well.

Though, it should be noted that the HP OEM driver doesn’t list the actual product names, since these are added by the database Admin based on the PCI ID list. The spotted 2205 GPU ID indeed belongs to the RTX 3080 Ti, as confirmed by T4CFantasy, who maintains the graphics cards database.

I forgot to tell you the device id? They are right!? https://t.co/wIpIPSmYxf 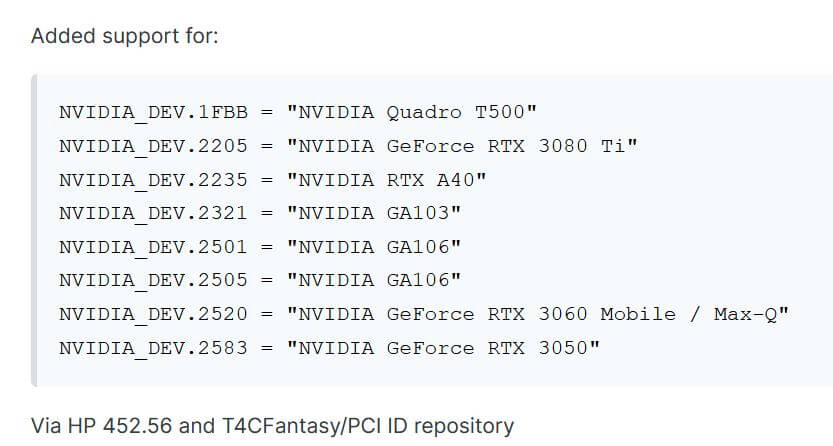 The list also features the RTX 3050 entry-level SKU which would be launching in January next year. It appears this time we won’t be getting any GTX-branded cards lacking hardware Ray Tracing/Tensor cores. This would also be the first time NVIDIA is bringing RTX support on its x050-series SKUs.

The full specs of the RTX 3080 Ti GPU have not been fully confirmed yet, especially the CUDA core count.

However, some recent rumors regarding the RTX 3080 Ti specs paint a card having the same CUDA core count as the current flagship high-end RTX 3090 GPU, sporting 10496 FP32 CUDA cores over the same 320-bit memory bus as the current RTX 3080 10 GB SKU.

Based on these new specs, we are basically looking at an RTX 3090-performance level, but at a slightly lower price point. It might be possible that NVIDIA will disable some select blocks on the GA102-250 GPU die, and/or this GPU will feature slightly lower clock speeds as well, but this remains to be seen.

When it comes to the memory specs, the card will feature 20 GB of GDDR6X VRAM, but will retain the same memory speed as the current RTX 3080 GPU at 19 Gbps.

The card won’t feature any NVLINK support, so you won’t be able to SLI these two cards. Not a big deal though, since multi-GPU is already dead in the water.

It appears that we could finally have a new SKU based on a 20 GB GDDR6X memory configuration. Since the GeForce RTX 3090 is around 10-15% faster than the RTX 3080, the RTX 3080 Ti is also expected to fall within the same performance bracket/range. The release of this new Ti variant SKU is more likely Nvidia’s response to counter AMD’s Big Navi 21 GPU lineup.

Maybe Nvidia thought the previously planned SKUs won’t be able to tackle AMD’s RX 6000-series Big Navi GPU lineup in terms of performance, so the company may have a new SKU in the works, with better specs as well, instead of just having more VRAM slapped on the PCB.

According to a new report coming via HKEPC, NVIDIA will launch the RTX3080 Ti in January 2021. But make a note that Nvidia has not yet officially announced these new SKUs, so we don’t have any specific timeline set for these rumored Ampere gaming cards. But these cards are surely in the company’s planned roadmap.