Earlier yesterday, we informed you about The Elder Scrolls Online and it’s time now to reveal some more details that were present on the GameInformer feature. As you already know, Zenimax Online Studios is developing this MMO and will be released exclusively on PC and Mac. The game is set 1000 years in the past and its world will be very large and almost at the same size with the one of Skyrim and you can explore almost anything you can see.

There are currently 250 people working on this project and its development started in 2007. According to Paul Sage, creative director for The Elder Scrolls Online (thanks Jeremy for the correction), the game will be fully voice acted and there will be a third-person perspective mode. In addition, the game uses a hotbar to activate skills like other traditional MMOs and will look – visually – similar to most other current-generation MMOs like RIFT and SWTOR, while its artistic style will be similar to RIFT or Everquest 2.

Players won’t be able to turn into werewolves or vampires and although there will be mounts, there won’t be flying mounts. Not only that but there won’t be player housing, NPC romances or marriage, and – most likely – there won’t be any dragons in the game.

According to Sage, “The Elder Scrolls Online needs to be comfortable for people who are comign in from a typical massively multiplayer game that has the same control mechanisms, but it also has to appeal to Skyrim players.” As such, the game uses MMORPG genre standards such as classes, experience points, and other traditional MMORPG progression mechanics.

Zenimax Online is keeping large areas inaccessible to save them for use as expansion content. Nonetheless, every major area is represented to some extent. As an example, Windhelm is fully implemented, but Winterhold and the mages’ college won’t be in at launch.

As you have read earlier, there will be three player factions. These factions are: Ebonheart Pact: The Nords, Dunmer, and Argoninans -Aldmeri Dominion: Altmer, Bosmer, and Khajit -Daggerfall Covenant: Bretons, Redguard, and Orcs.

Players will need around 120 hours to reach the game’s level cap, every faction has their own leveling content, and players won’t be able to master every discipline.

The Elder Scrolls Online will feature raids and heroic modes for its dungeons as end game content in addition to faction PvP and there will be balanced PvP for people who prefer eSports. The game will also have high end public dungeons, which are essentially instances that aren’t actually instanced, meaning that anyone can be in them.

Unfortunately, the combat system won’t be real-time due to latency issues and will be based around a stamina bar which you can use to sprint, block, interrupt, and break incapacitating effects. Blocking is the primary focus of these abilities, and can do things like stopping the secondary effects of attacks such as an ice spell slowing you. Stamina management (and wearing down your enemy’s stamina) is important, as your crowd control abilities might be on a long cooldown, and if you use them before the enemy player runs out of stamina, they will probably just block the effect. Long story short, ZeniMax feels that having the stamina bar will help break down the Holy Trinity as stamina allows you to do things like tank.

The Elder Scrolls Online is slated for a 2013 release and you can find below its first screenshots. Enjoy! 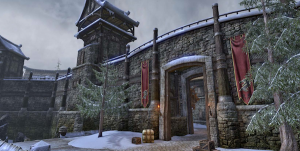 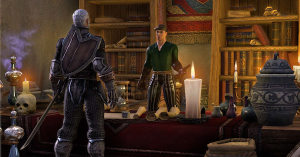 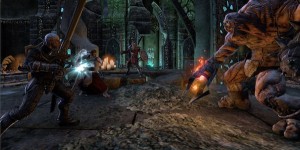