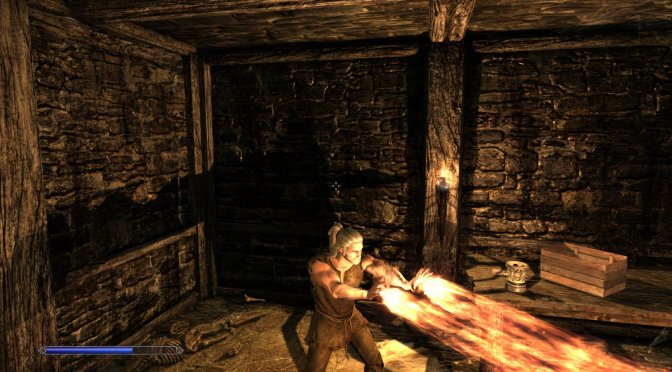 Talyn82 has released new enhanced versions of the Skyrim Witcher Experience for The Elder Scrolls V: Skyrim. As the title suggests, this mod adds to Skyrim monsters, armors, weapons, signs, potions and books from The Witcher games.

Modder AlphaWolF was responsible for the original Skyrim Witcher Experience mod, and this new version aims to improve upon AlphaWolF’s work. Version 1.2 addresses some of the mod’s issues, such as broken enchantments and broken weapon stats.

Moreover, the enhanced version of Skyrim Witcher Experience fixes flames shooting upward and removes Dawnguard dependacy. In addition, most armors are now craftable. All armors are now upgradeable, as well as Rare and Epic armors.

Furthermore, all alchemists now sell Witcher ingredients. In villages without alchemists, the tavern keepers sell ingredients. Also, Enchantments on all weapons and armors have been fixed.

In short, this is a pretty cool mod that most The Witcher fans will find interesting. After all, it combines two of the best open-world games to date. Not only that, but there are some other character swap mods out there that allow you to play as Geralt.

You can download the Skyrim Witcher Experience Enhanced mod for the original Skyrim game from here. You can also find a version for Skyrim Special Edition here.