Just a few days ago, a reddit user, asked CD Project Red about the limitations of acting violently towards NPCs (non-player characters) within Night City. CDPR responded by saying pretty much what we already have seen in games like Skyrim. You can basically attack almost anyone, except key characters tied to the story and of course children NPCs. 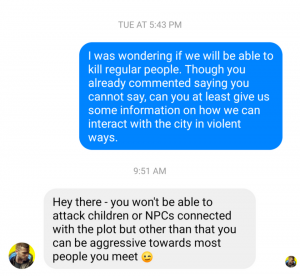 Later on, CDPR emailed Fraser Brown of PCGamer, with a follow up saying that in some areas, aggressive behavior may lead to further consequences. Especially if these areas are being controlled by some kind of authority or gang. So basically if you are a trouble maker, chances are trouble will eventually find you and probably bite you in the ass.

I like freedom and I do appreciate CDPR being close to the fans. Players who like to go dark side will definitely welcome the freedom. I rarely play as bad guy in these games, but once in a while I might go postal in the center of the Market District in the Imperial City, or in the Wind District of Whiterun, just to see how long I’ll survive. Always manual save before you do, because most of these games become quite unplayable, if you just murder everyone. Maybe Cyberpunk 2077 will address this better compared to the latest Elder Scrolls titles.

Lead quest designer Pawel Sasko, in recent tweet,  said that you can own garages and store multiple vehicles, such as cars and bikes. He also said that every vehicle will have a radio installed, for you to listen different radio stations playing different kinds of music, while driving around within the six districts of Night City. This is nothing we haven’t seen before, but I will always welcome more gameplay features. I am curious if we will be able to add our own music tracks, like Grand Theft Auto’s Self Radio station.

Lead Quest Designer for #Cyberpunk2077, @PaweSasko, would like to talk to you about cars and motorcycles. And if there’s cars, there has to be radio, right? ? pic.twitter.com/5K2pyvRbc9

Last but not least, Pawel Sasko also shared some new details about the game’s branching stories. Cyberpunk 2077 will have branches that will lead players through different stories. These stories will be better implemented than the stories featured in The Witcher 3, so players are in for a treat. Not only that, but the game will also come with a new scene system that promises to be even better than the one featured in The Witcher 3.

“Now all of that for the important characters, the same way it was in The Witcher 3, it will actually start the branches of separate stories, and you will have separate quests that lead you through that (similarly to The Bloody Baron). And [you’ll] get to know the different characters, and sometimes that will even lead to romance options, if that given character is interested in you, of course, because they might not be. [And] that depends on who you are, what you are, and so on.

As a player, you have all these branches that are leading you through different stories. I feel that it might be a bit like this: when we were developing when you are going though those stories and there is a certain, I would call it a ‘chapter that ends’, you feel like, “okay, yeah, some kind of story has just ended”. So in that regard I would say yes [to your question], however, one of the important things that we are doing in [Cyberpunk] is trying to make sure that the transition through the quest is really seamless.

It’s one of the things we’ve done with our scene system, and we’ve reworked it completely from the ground up. People we’re saying [that] our scene system [for The Witcher 3 was] one of the most advanced scene systems ever created, and frankly we [threw] it away and made a new one that is even better. We’ve just reworked it completely, and one of the reasons you will walk in the city and see all of those scenes happening all around you, and you go and talk to Placide, and Placide moves and talks to this woman and then to the vendor, and you move on and there are all these people around you. We can do all of that thanks to our scene system, and it’s really… it’s all seamless, right, so it doesn’t cut from one to another.”