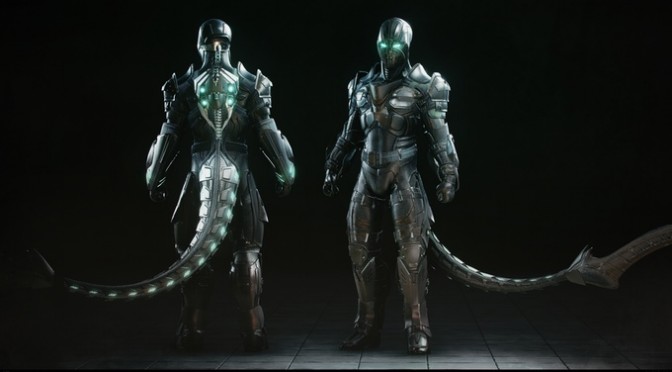 Remember Nelo? No? Well, back in 2014 we informed you about this indie title. Developed by Magic & Mirrors, Nelo is an arcade twin-stick shooter with elements of modern games, is fast-paced, will support two viewpoints (third-person and top-down). Two years later and here we are today with the team launching a Kickstarter campaign for it.

“Nelo hybrids gameplay of twinstick shooters with modern action games, as well as offer many other unique mechanics and gameplay scenarios. It takes inspiration from retro-like shooters such as Geometry Wars and Robotron 2084 and turns it into an intense, 3 dimensional action-adventure experience with a gritty, sci-fi art direction.”

The good news is that Magic & Mirrors have also released a prototype demo for it that you can play before pledging your support. You can download the demo from here. Naturally, this demo is a work in progress and is not a represent the quality of the final product.

In Nelo, players can switch between a third person action mode and a top down twinstick shooter mode in the push and release of a button.

“This shooting system is more important to the combat than sounds as a concept. The twinstick shooter mode is very beneficial for fast, close quarter combat because it gives you a better view of your surroundings. But the third person mode offers better range and verticality. We mapped this ability to the right mouse button and the left trigger on the gamepad because we use it as much as other shooters use aim down sights.”

Apart from frenetic action, Nelo will also feature exploration and platforming elements. Players will be able to use their advanced mobility to traverse large structures and explore the alien worlds and even stealth around Nightsithe patrol ships.

Players will also be able to control turrets and special vehicles, and an Endurance mode will be added that can be played solo or cooperatively.