The size of these mini gaming PCs makes it more flexible to put in spaces that might not work with a traditional desktop tower. For a long time, though, experimenting with SFF meant sacrificing gaming performance or functionality to get that smaller footprint. That’s changed over the last few years. Now, a full-fledged PC gaming experience is accessible in a smaller package.

Previously, we have seen low-profile GTX 1650 cards from the likes of MSI, ZOTAC and even MANLI, but most of these variants were having the “GDDR5” memory. This new SKU from MANLI comes with a GDDR6 memory type.

The original GeForce GTX 1650 GPU rocked the TU117 silicon, and the GPU’s 896 CUDA cores were attached to 4GB of 8Gbps GDDR5 memory on a 128-bit memory interface bus. After a year later, Nvidia rolled out the same card having a GDDR6 Memory type, and this variant came with a faster 12Gbps GDDR6 memory, which actually allowed the graphics card to deliver up to 50% higher memory bandwidth, despite lower clock speeds. The GDDR6 upgrade boosted the performance up to 10-15% over the vanilla GTX 1650 GDDR5 SKU. 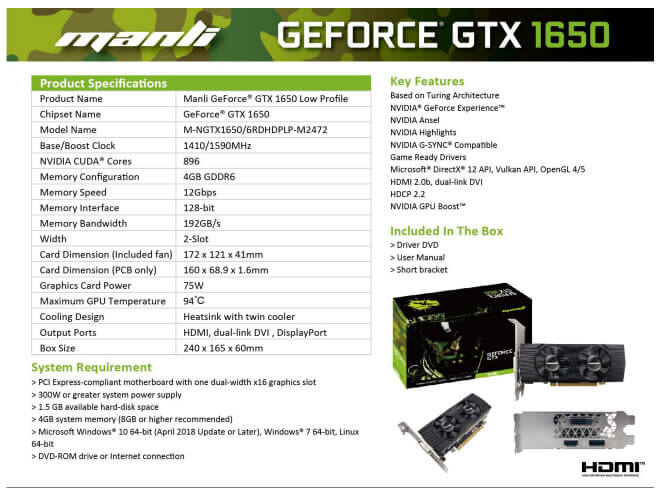 The key upgrades of this new MANLI card also include 12 Gbps memory speed and 192 GB/sec memory bandwidth, both of which are higher than the DDR5 variant. Clock speed is at 1410 Mhz and can be boosted to 1590 Mhz. This results in a performance boost of roughly 6.31% over the DDR5 SKU.

The performance of this new GDDR6 card is higher than the GDDR5 SKU, but lower than the new GeForce GTX 1650 Super variant. This card is meant for Gamers who don’t have a full tower ATX cabinet, or their current ATX cabinet lacks enough room for a discrete GPU.

But what exactly qualifies a PC as having a small form factor? Given that a standard ATX desktop tower is usually measured around 40-45 liters (the unit of measurement often used to measure case volume), many consider around half of that, 25 liters or less, to qualify as SFF.