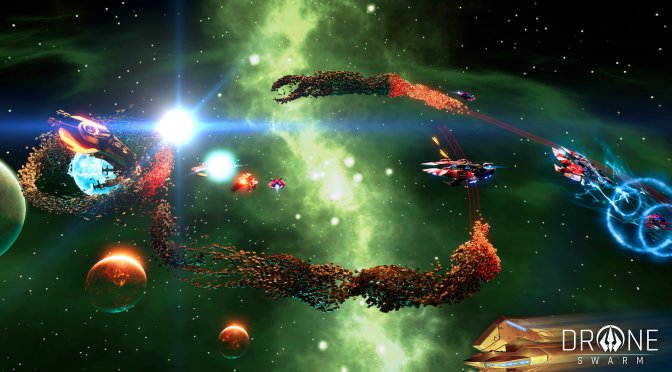 In Drone Swarm players take command of the only human FTL ship: the Argo. As Captain Carter, you control a swarm of 32.000 individually simulated drones. Players will have to use it creatively to advance their mission to find New Earth.

As the press release reads, mastering the swarm is the key gameplay element in Drone Swarm. With the help of it, you must defend the mothership against alien attacks. For instance, you can build a shield wall using the drones by drawing a defensive formation to intercept any shots of your opponents.

Players will be able to quickly analyze the enemy’s tactics to find the best way to defend yourself, initiate a counter-attack and obliterate their opponents. Players will also have to counter different enemies in different ways. Some enemies will be agile, whereas others will have powerful shields, unknown attacks or disabling abilities.

Naturally, players will also have to engage the enemies. Players will be able to do this by drawing attack paths, using physical maneuvers, or utilizing the environment to destroy their ships. To be successful in battle, players must adapt their tactics and usage of the swarm against every enemy fleet.

After the players have learned to control the swarm, they can explore more and more of their drones’ abilities. Players will be able to make some improvements to the mothership, repair damage and rebuild the swarm.

Lastly, the game will offer players a star map in-between battles. This map will allow them to choose their own path and how to approach the main objectives.

Drone Swarm is coming to the PC later this year, and you can download a demo from Steam right now!