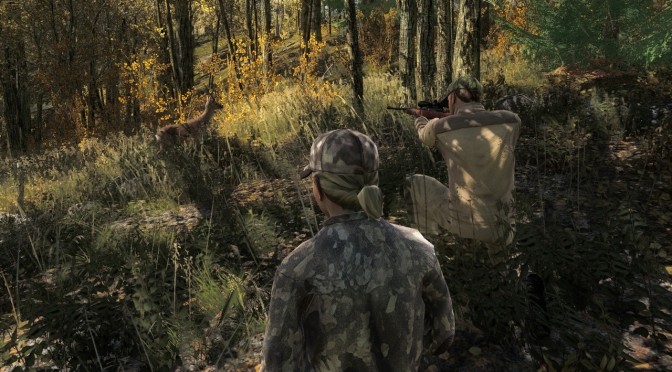 Avalanche Studios and Expansive Worlds have announced that theHunter has reached more than 5 million registered players, making it the largest virtual hunting community in the world. Moreover – and as the companies noted – 4 million of the total players have joined in the last 22 months.

To date, theHunter players have walked 72 million kilometers, spent a total of 2500 years in-game, hit their targets more than 63 million times (but missed more than 50 million times). Players have found more than 240 000 chantarelles, 1826 rare golden eggs and 54 million not quite so rare piles of poop, or droppings as they are more accurately referred to.

Not resting on their laurels, Expansive Worlds yesterday released a brand new hunting reserve, set in the Australian outback.

“In Bushranger’s Run, the first “dry” landscape of theHunter, players can enjoy a color scheme completely new to the game, open fields, characteristically red rocks, spiders, scorpions and groups of Acacia trees around dried out river areas. It’s a hostile landscape, but also a beautiful one, brought to life by the award-winning Avalanche Engine.”

Of course, Bushranger’s Run would not be the outback without the presence of kangaroos as prey for the player. This animal is theHunter’s fastest yet. Its speed, along with an unusual pattern of movement, makes it a difficult target to hit.

”5 million registered players is a fantastic milestone. We could not be happier with the level of support theHunter has received. I also want to say something about our community. In the last few months, we’ve enjoyed a lot of media limelight for the successful Early Access launch of theHunter: Primal. But we made a promise to the loyal theHunter community to keep their game evolving throughout the development of Primal, and we remain committed to that. With the release of Bushranger’s Run, I think we keep fulfilling our promise.”

“It’s rewarding to see theHunter continuously thrive. As part of the Avalanche Studios group of companies, Expansive Worlds represents strength through diversity. theHunter is the perfect complement to our massive AAA titles. Running since 2009, it has taught us how to approach the Free to Play business model in a respectful and mature way – an invaluable experience to build on as games keep evolving into services.”