Intel today announced in a press release that the company is releasing its first Iris Xe discrete graphics cards for desktops, code-named as “DG1”. Intel has partnered with ASUS, Colorful and other major OEMs and system builders to bring this discrete GPU to pre-built systems.

Intel is first targeting mainstream users and small and medium-size businesses, and these cards are being sold to system integrators who will offer Iris Xe discrete graphics as part of their pre-built systems. So basically you won’t be able to buy these GPUs separately from retail shops, since this is an OEM-exclusive graphics chip for now.

Intel finally enters the dGPU market after a long stint. Just like the current Iris-Xe products, the Iris Xe for the desktop is also based on the Xe-LP architecture. The Iris Xe features the DG1 GPU which is fabbed on the 10nm SuperFin process node.

The DG1 graphics processor sports a total of 80 Execution Units, which amounts to 640 shading units, and the memory bandwidth is 68 GB/s. There are a total of 40 Texture units, and roughly about 20 ROPs.

The GPU also features 4GB of LPDDR4X memory slapped on a 128-bit memory bus interface. Based on these current specs, this card is clearly not meant for hardcore gaming. Moreover, the card will only be sold to OEMs and system integrators.

Intel also recently announced its launch of Iris Xe MAX GPU for notebooks, which is is clocked at 1650 MHz. However, we don’t have the clock speeds of this non-max desktop variant, but it should be higher than the mobile part.

While the dedicated Iris Xe MAX graphics card for notebook uses 96 EUs, this dedicated desktop variant only uses 80, since it is a cut-down variant.

The ASUS (DG1-4G) GPU as shown in the picture below features the HDMI, DisplayPort and dual-link DVI interface, and a passive fanless cooling solution. Another variant from Colorful however has two axial fans, but this design is kind of overkill for a GPU having just 30 Watts as the TDP.

Neither of the cards has PCIe power connectors, since these are low power graphics chips. 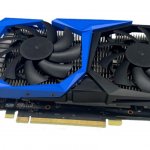 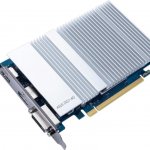 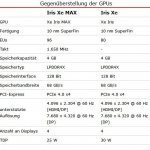 It appears that these Intel Xe Discrete Desktop GPUs will only be compatible with select motherboards and CPUs, and will require a “special BIOS” to function.

Unlike GPUs from AMD and Nvidia, Intel’s first discrete GPU cannot work with AMD processors and is locked into the Intel hardware ecosystem. Only some select Intel processors and chipsets can work with this graphics card, which in turn makes things even worse for gamers.

Intel has given an official statement to Legit Reviews, when contacted regarding this issue:

“The Iris Xe discrete add-in card will be paired with 9th gen (Coffee Lake-S) and 10th gen (Comet Lake-S) Intel® Core™ desktop processors and Intel(R) B460, H410, B365, and H310C chipset-based motherboards and sold as part of pre-built systems. These motherboards require a special BIOS that supports Intel Iris Xe, so the cards won’t be compatible with other systems.”